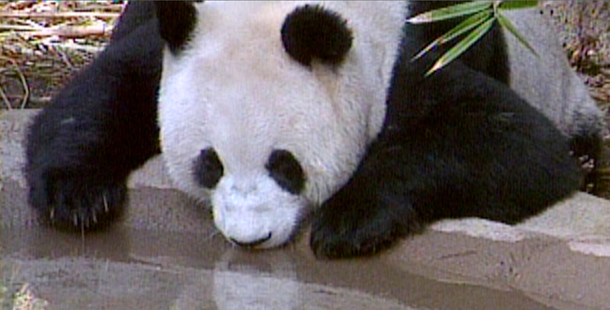 During the 20th century, as humans have encroached more and more on animals’ territory, zoos have come to be more than just places to view wild animals. They have become breeding facilities, wild animal hospitals, and research centers. As you see in Animal Attractions: Amazing Tales from the San Diego Zoo, a lot goes on behind the scenes, away from the ordinary visitor. And much of this activity is focused on a single goal: trying to save species from extinction.

The thought behind this idea is that as humans have spread across the globe, the breeding, migratory, and behavior patterns of wild animals have been forever changed. Since we cannot put the world back the way it was, scientists reason, we must try to invent new ways to deal with the problem of endangered animals, some of whose ranks have dwindled to the double — or even single — digits.

The Species Survival Plan (SSP) is sponsored by the American Zoo and Aquarium Association (AZA). The plan’s aim is to help “ensure the survival of selected wildlife species” through cooperative captive-breeding and training programs. Zoos share animals with other zoos, which keeps gene pools diverse as well as increasing the chances of conception in the event that a particular male and female don’t seem to have the right “chemistry.” 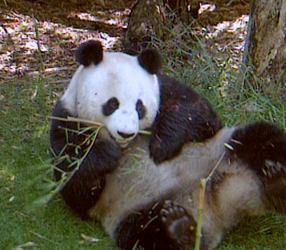 The Center for Reproduction of Endangered Species at the San Diego Zoo is headquarters for the SSP of the giant panda. If the resident pandas are not on exhibit at the zoo, they are probably under the scrutinizing eye of researchers studying their behavior. This program, headed by scientist Dr. Don Lindburg, began in 1987 as a long-distance collaboration with Chinese scientists at the Woolong Giant Panda Conservation Centre in Sichuan Province, China. This rare species faces the double threat of habitat fragmentation and illegal hunting, even though the latter carries the steep penalty of execution in China. Today, an estimated 1,000 pandas survive in the remote bamboo forest areas of the Qionlai Mountains.

In September, 1996, Lindburg’s team became foster keepers for a 15-year-old rescued male named Shi Shi and a six-year-old captive-born female named Bai Yun, both on loan from Woolong. The pair was introduced in February, 1997, in the hopes that when Bai Yun was ready to mate, Shi Shi would accept her.

They noticed each other, and it was not friendly, but it was not aggressive either,” describes Lindburg of the pandas’ first meeting. “It is sort of what you would expect from a solitary animal.” Wild pandas are rarely found in pairs, unless a mother is nursing a youngster or a couple is about to copulate. To put the pandas “in the mood,” Lindburg rotated them in each other’s play spaces, recording their reactions to various aromas placed in the environment. He eventually put the pair together.

“What happened was that the female became very solicitous,” says Lindburg. “Unfortunately, the male basically ignored her, and then responded to all of her overtures in an unfriendly manner.” Shi Shi growled, chased Bai Yun away, and swatted at her.

This means the researchers will have to wait a whole year to run the process all over again: females receive males only once a year for two or three days, attracting them with a “panda perfume” in the form of scent markings on trees or the ground. Scientists believe that this method is one of the main reasons pandas face extinction: their habitats, once solid swaths of forest, have been split up by a sprawling human population. Now pandas cannot find each other during the crucial one to two days when the female is in season.

Meanwhile, Lindburg and his colleagues are studying Bai Yun and Shi Shi intensely, hoping that their behavior will give researchers a clue as to how to boost the falling population of pandas in the wild.

Update: On Auguest 21, 1999, Shi Shi gave birth to Hua Mei, the first giant panda born in the Western Hemisphere since 1990. On February 11, 2000, visitors to the San Diego Zoo were able to get a glimpse of the baby panda.

Additional Web Resources
Modern Zoos
Condors: Back to the Wild
About
Animal Medicine