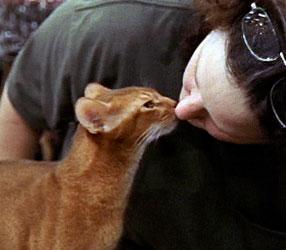 To most people, Bart the cat may look like just another tabby. But to high school student Jose Ybara and his mother, the mischievous Illinois feline is a hero.

One night a few years ago, just before the break of dawn, Jose lay in his bed suffering from a sudden, life-threatening seizure. Bart, apparently alarmed by Jose’s distress, leapt upon the mother’s bed in the next room. “She was licking my mom’s eyelids, scratching and meowing, doing anything she could to wake her up,” Jose later told reporters. The warning worked: Jose made it to a nearby hospital and his life was saved. And, in a historic first, the Illinois government honored Bart for her “ingenuity and persistence” in the rescue.

Amazing? Yes. But no more remarkable than the many exceptional cats profiled in the NATURE program EXTRAORDINARY CATS. From Sooty, the English cat who found his way over 100 miles back home, to Scarlett, who risked her own life to save her five kittens from a burning building, EXTRAORDINARY CATS profiles the incredible exploits that even the most complacent fat cat can perform. It also highlights the remarkable bonds that people have forged with these once wild creatures, from convicts who find a second chance by grooming their silky fur to psychologists who try to help cats from driving their owners crazy.

Cats and people have a relationship that goes back a long way. Scholars believe that people first welcomed cats into their homes in North Africa more than 2,500 years ago. The partnership was born out of mutual benefit: people welcomed the cats because they killed the mice and rats that threatened to eat their hoards of grain; the cats, in turn, got shelter and a stable food supply. The first house cat, in fact, may have been a small wild cat with a yellowish coat and pale stripes whose relatives can still be found in the wild today. Over time, however, many other wild species were added into the mix, producing the array of multicolored breeds that can be seen today at cat shows everywhere, from huge Maine coon cats and hairy Persians to spotted jungle lynxes and short-tailed pixiebobs.

There is little doubt that even the first cat owners revered their pets. Early Egyptians, for instance, elevated them to the status of deities, including in their pantheon a pointy-eared cat goddess. Cats were mummified and buried with their owners, and the Egyptians reportedly imposed the death penalty on anyone convicted of killing a cat. Felines appear in paintings and sculptures from ancient Greece, Rome, and India, and they even made it onto the money — with their whiskered faces peering out from coins.

But not all cultures encouraged cats. One 15th century pope, for example, decreed that cat-fanciers be burned as witches. And in England, a Witchcraft Act of the early 1700s identified black cats as dangerous animals to be shunned. Even so, many Europeans still consider black cats as symbols of luck — and they’ve become one of the most popular pets worldwide.

Even many of today’s lap cats aren’t completely domesticated, however. They still retain the ability and the instincts to hunt and live on their own. Indeed, these survival skills have led to a troubling cat population problem in the United States, where millions of feral, or wild, cats roam cities and fields, wreaking havoc on wild bird populations and other wild animals. The growth of feral cat populations is one reason veterinarians encourage cat owners to have their pets spayed or neutered, rendering them unable to produce kittens. Some simple math dramatizes just how important these inexpensive procedures can be. If a lone wild female cat produces just two litters per year, and each of her surviving daughters does the same, the total number of cats descended from just this one animal would be more than 30,000 in just six years. Such reproductive potential may explain why Boston’s National Council on Pet Population Study & Policy estimates that there are 100 million homeless cats in the United States. Other researchers put the number at about half that — still a number great enough to make up an army of wild cats.

Despite its independence, our fascination with the cat is sure to continue. There is just something about that purr and the way a kitten curls up in your lap that makes these animals irresistible to all but the most allergic. But as EXTRAORDINARY CATS shows, that kitty lazing on the couch may have a hidden side that comes out in crisis — whether it is saving a life or cheering up an owner’s gloomy day. Like Bart, Sooty, and Scarlett, even the most ordinary kitty may be capable of extraordinary things.

Hippos: Africa's River Giants
Equus "Story of the Horse" | Episode 2: Chasing the Wind
The Elephants of Africa
The Last Orangutan Eden
Dolphins: Spy in the Pod | Part 2
A Life Among the Clouds: A NATURE Short Film