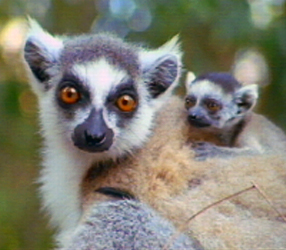 To capture the intimate family portraits in A Lemur’s Tale, filmmaker Adrian Warren spent five months painstakingly trailing a lemur troop through the forests of Berenty in southern Madagascar. “You crawl on your belly from dawn to dusk, day after day — the trick is to stay with them and gain their confidence,” says the veteran wildlife cameraman.

Such dogged tracking allowed Warren to capture some remarkable and emotionally wrenching scenes, such as one in which a mother lemur appears to mourn her infant son, killed in a fall from a tree. “It was quite heart-rending to watch,” Warren recalls. “The level of maternal concern was remarkable and touching.”

Another memorable experience during the project, Warren says, was the September, 1995, discovery of Sapphire, the unusual white lemur infant with blue eyes that is a central character in A Lemur’s Tale. In a recently written account, Warren recalled the first encounter: “It was oppressively hot, but at least the giant tamarind tree under which we were sitting offered us some shade. Beautiful light filtered through the feathery green leaves, dappling the soft grey fur of some Ring-tail lemurs that were draped, like lifeless puppets, over the branches.

“All was not normal in this troop, however, for among this year’s clutch of new infants was an almost all-white male baby. He wasn’t truly albino, for he had black rings around his tail just like the others, and his eyes were a sparkling blue. Only days old, he appeared small and fragile, as he clutched tightly to his mother’s fur. Those of us present all knew that we were looking at a very special animal.”

Captivated by Sapphire, Warren tracked the troop over the next few months, usually working solo. “It’s much better to be on your own,” he says. “The animals are much more willing to trust you, and they behave more naturally in front of just one person than a crowd. After a while, they even began following me. One female liked to watch me change film; meanwhile, her friends would be rummaging through my cases.”

Such intimacy enabled Warren to share in both the joys and sorrows of lemur life. He was there with his camera when Sapphire eventually died from unknown causes, but also when a set of twins overcame the odds to survive. Still, Warren did not know for months — until his film was processed — whether he had actually captured these moments. “It’s pretty nerve-wracking,” he says, in part because filming often occurs in less than ideal conditions. “It’s very hot, and in the rainy season there are torrential downpours. Then there is so much plant growth that it is very dark on the forest floor, where the lemurs spend a lot of time. The one plus about filming in Madagascar is that you don’t get poisonous snakes.” Overall, he estimates he shot 20 times more film than was used in the final product — about average for wildlife filmmakers, he says.

While Warren is pleased that his lemur portrait has been shown widely in Europe and the U.S., he is even prouder of his success in getting the film’s narration translated into Malagasy, the island’s native language, so that he can share his work with the people of Madagascar. Soon, he will return to the country to distribute 50 copies of A Lemur’s Tale to schools, libraries, and conservation groups. “It strengthens the value of the work if you can take it back to where you filmed,” he says. “It shows people that they have something of tremendous value right on their own doorsteps.”

Additional Web and Print Resources
A Biological Jewel
About

The Last Orangutan Eden
The Beauty of Ugly
Dogs in the Land of Lions
Hippos: Africa's River Giants
My Congo
The Whale Detective