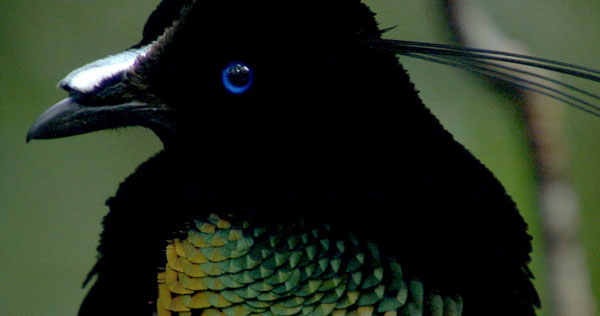 Species: There are an estimated 42 species of bird of paradise.

Size: Size varies depending on species, from approximately 15 cm or 5.9 in (King bird of paradise) to 110 cm or 43 in (Black Sicklebill).

Weight: Weight varies depending on species, from approximately 50 grams or 1.8 oz (King bird of paradise) to 448 grams or 15.8 oz (Curl-crested Manucode).

Plumage: The majority of birds of paradise are sexual dimorphic. Males have brightly colored and elaborate plumage while the females’ plumage is more drab. Coloring and type of plumage varies drastically between species.

Geography: Primarily found on the island of New Guinea. Some species are found in Northeastern Australia and surrounding islands.

Breeding: Most males perform bizarre and complex courtship displays to attract potential female mates. Some species perform solo while others perform in large groups known as leks. After mating, most female birds of paradise will leave and raise their young alone.

Threats: Birds of paradise have no natural carnivorous predators. However, excessive hunting by human populations and the growing logging industry encroaching on their natural habitats has put some species at risk.