Those who explore the waters of the Amazon basin occasionally hear a forceful snort, the sound that a pink river dolphin or boto makes when it surfaces to exhale. Visitors sometimes catch a glimpse of a pinkish, rounded forehead or small dorsal fin just above the surface. That’s likely all they’ll get, though. Not only are these freshwater dolphins relatively shy, but their numbers have also drastically declined in recent years. 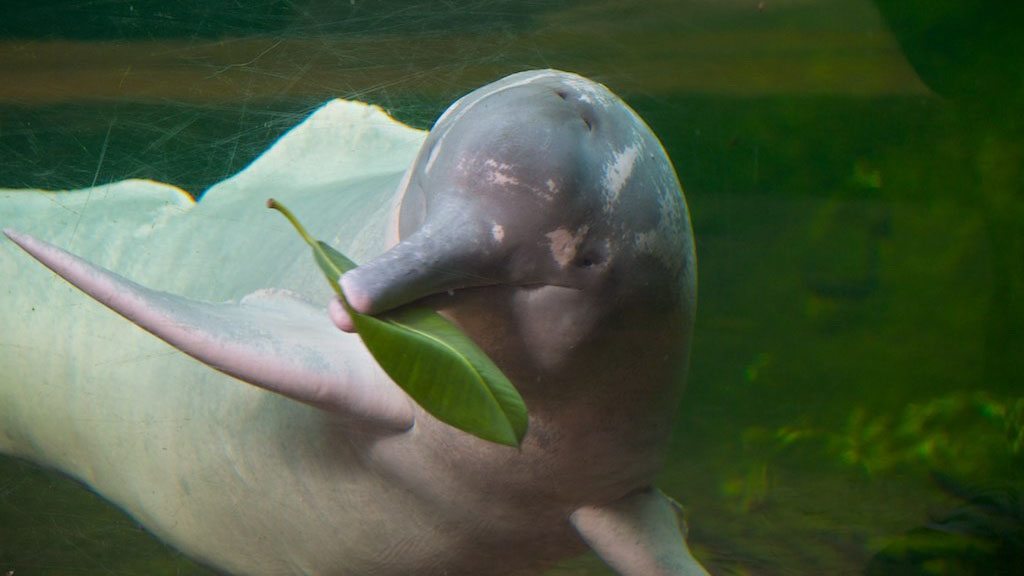 The Amazon basin, the largest and most biodiverse tropical rainforest in the world, covers 2.6 million square miles and 40 percent of the South American continent. Its 1.4 billion acres of forest and 4,100 miles of river house an incredible variety of plant and animal life, including the boto and another freshwater dolphin, the grey or tucuxi.

The smaller of the two, the Tucuxi travels in groups and occasionally jumps out of the water, much like its marine cousins. Botos typically live in groups of two to four and only rarely jump. The pink dolphin’s bulbous head, flexible neck and long snout give it a look much different from the more familiar marine species. That flexible neck helps the animals navigate the flooded forest in search of fish, and they use their snouts to root through river mud for crustaceans. Pink dolphins grow larger than other river dolphin species – up to eight feet long and 450 pounds – and have larger brains.

Local lore attributes mystical powers to these creatures, including the ability to take on human form and come onto land at night, covering their blowholes with hats. Locals say young women have blamed these encantados or enchanted shapeshifters for pregnancies.

Potential magic powers aside, pink dolphins face habitat loss and degradation, and increasing numbers of them drown after becoming entangled in fishing nets. Even worse, during the past few decades, fishermen have begun killing them to use as bait for commercial fishing, primarily for a catfish also known as piracatinga and mota. Other threats include hydroelectric dams and pollution.

The IUCN Red List categorizes pink dolphins as Data Deficient, meaning scientists lack sufficient data on abundance and distribution to determine whether the animals are at risk of extinction. But a recent study from the National Institute of Amazonian Research in Manaus, Brazil, analyzed surveys conducted monthly from 1994 to 2017 in the Mamirauá Reserve. The scientists found that the number of botos dropped by half every 10 years and the number of tucuxis by half every 9 years. Based on this work, both species qualify as IUCN Critically Endangered.

During the time period of the surveys, the waterway experienced no substantial changes. Commercial fishing was banned in the reserve before the study began, and the number of people in the area remains low. Populations of fish on which the dolphins feed seem healthy, and the region remains mostly unaffected by dams or changes in industrial fishing, logging, mining or shipping. That, scientists say, leaves no obvious reason for the decline other than people killing the dolphins for bait.

“Since the year 2000, when the directed hunt was known to be underway, our results show that well over half of the boto population of the Mamirauá Reserve and the surrounding area has been lost,” the paper states.

Tucuxis have declined even more than botos. These smaller, less powerful dolphins may find it harder to escape entanglement in fishing nets; the study reports gillnets in evidence at almost every house along the river and nets often completely block the channel the animals swim through at night to reach the Mamirauá lake system. Tucuxis likely face worse conditions elsewhere, given Mamirauá’s protected status and the fact that many local people earn a living from the Reserve.