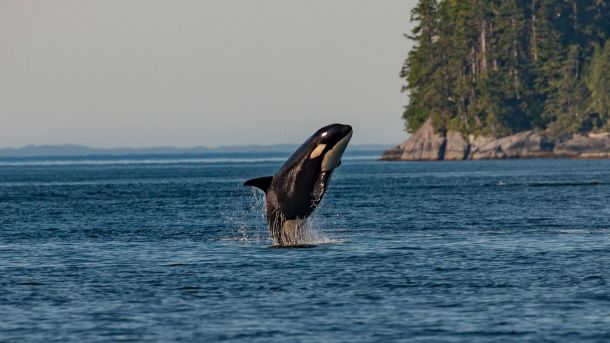 Photo by Thomas Lipke on Unsplash

Killer Whale or orca (Orcinus orca): the largest member of the Delphinidae family, or dolphin.

Despite what its name “killer whale” may suggest, the orca is a member of the dolphin family. Members of the Delphinidae family include all dolphin species, as well as the long-finned pilot whales and short-finned pilot whales, whose common names also contain “whale” instead of “dolphin.”

Killer whales are one of the most recognizable marine mammals, with their distinctive black body with a white underside. They have a gray patch called a “saddle” or a “cape” on the back, just behind the dorsal fin. Their distinctive coloring is a type of disruptive coloration, which is a pattern that obscures the outline of an animal by contradicting the animal’s body shape. This coloration helps disguise it as a potential predator to other animals.

They have a fusiform body shape, roughly cylindrical with tapering at both ends, which helps with swimming.

The diet of a killer whale depends on its population and region. They are an apex predator, meaning that they are at the top of the food chain. They are the only known predators of great white sharks. Killer whales feed on fish and squid-like species. They also prey on seals, sea birds, and other whale species, including those larger than themselves.

Killer whales are known as the wolves of the sea, largely due to their hunting behavior. They often use a coordinated hunting strategy that is passed down through generations. Their diets depend on the region they inhabit and the pod’s approach to hunting.

These highly intelligent cetaceans have been documented creating large waves to wash seals off ice floes, and even intentionally beaching themselves to catch prey on the shore.

Killer whales can be found in a variety of habitats across the world, including both open seas and coastal waters.

Killer whales can be found in every ocean in the world, making them some of the most widely distributed whales and dolphins.

Female killer whales come into estrus several times a year. The female will mate with a male from another pod. The gestation period ranges from 15 to 18 months. The female typically gives birth to one calve. The mortality rate for calves is high at 37 to 50%. In several populations, it has been observed that all members of the pod will help to raise the calf. Weaning begins when the calf is one year old and will be complete by two years.

Female orcas typically give birth to one calf every five years. They typically have several breeding partners throughout their lifespan. A female orca will undergo menopause around the age of 40 years old. They are one of the few animals to undergo menopause and live for decades after. It is estimated that the lifespans of wild females average 50 to 80 years, with some living considerably longer. Meanwhile, wild males live around 29 years on average, with a maximum of about 60 years.

The social structures of North Pacific resident killer whale populations are some of the best-studied. In these populations, the matriline is the core group, where the bonds are extremely strong and stable. These groups stick together the majority of the time, and individuals are highly unlikely to permanently leave the group. The matriline can consist of only one generation to as many as four generations of related whales.

The next level of social structure observed in resident whales of the North Pacific is the pod. A pod is a group of related matrilines that travel together. Pods are less stable and a matriline group may break away from the pod for an extended period. Above the pod is a social level called the clan, which consists of pods in a similar area. Clans often have similar vocal dialects and are thought to be related. The top social level is called a community, which is a group of killer whales that share a common range and regularly associate with one another. A community is not based upon maternal links or vocal similarities.

A killer whale’s lifespan ranges from 30 to 90 years.

Following the Exxon Valdez oil spill in 1989, a population of killer whales found in the eastern North Pacific was reduced from 22 to 7 whales. In the United States, the population of killer whales known as the Southern Residents in the eastern North Pacific is considered endangered. Following live capture in the 1960s for use in marine mammal parks, 71 South Resident killer whales remained in 1974. The number has risen and fallen over recent decades, with the 2020 population census counting only 72 whales and three new calves have been born following the census bringing the total of this struggling population to 75.

Conservation efforts that are critical to protecting the species include establishing critical habitat, setting protective regulations, and restoring prey stocks. All killer whale populations are protected under the Marine Mammal Protection Act (MMPA) of 1972, which made it illegal to hunt or harass marine mammals in the United States. NOAA Fisheries is working with its partners towards killer whale conservation through further research and the development of regulations and management plans.

In the United States, the only endangered killer whale population is the Southern Resident killer whales, which range from central California to southeast Alaska. The population was featured as one of NOAA Fisheries’ Species in the Spotlight, which includes animals considered most at risk for extinction and prioritizes their recovery efforts.