On September 20, Hurricane Maria tore across Puerto Rico, wiping out its electrical grid, crippling its water supply, and displacing tens of thousands of people. Shortly after the storm, Governor Ricardo Rosselló called the crisis a “humanitarian disaster.”

Some of the island’s most imperiled wildlife and their habitats also took a hit.

This past April, NATURE aired Viva Puerto Rico, an episode about the island’s vibrant wildlife focusing on three iconic animals: manatees, leatherback turtles, and the Puerto Rican parrot. We checked in with some of the people involved in conserving these animals to see how they weathered the storm.

At the Puerto Rico Manatee Conservation Center, director Tony Mignucci and his team had four manatees to protect: Guacara, 12; Aramana, 6; Tureygua, 2; and Mabo, not yet 2. (You may recall from April’s episode that Aramana was released into the wild, but Mignucci’s team noticed that he was losing weight and had to bring him back to the Center to bulk up.)

Guacara and Aramana remained in their tanks during the storm, which is typical protocol for a critical care facility like theirs, according to Mignucci, who is also a marine sciences professor at Interamerican University, where the Center is located. “Animals are usually left in their tanks, and the water is lowered, and then six hours before the hurricane hits, it becomes a matter of human lives that have to be saved and secured,” he told NATURE in a phone interview in late October.

Mignucci’s team also cleared the area around the tanks from debris that could otherwise fly in and injure the animals, and put water hyacinth in the water to serve as a snack, as well as a protective buffer.

But Mignucci had other plans for Tureygua and Mabo, the latter of whom still requires bottle-feeding. He loaded them into the back of a pick-up and took them home, where they hunkered down in his swimming pool. “I mean, what can I do? The hurricane is coming. I’m not going to leave the little kids behind!” said Mignucci. During the storm, he noticed that the youngsters lingered at the bottom of the pool, away from the choppy surface. They were pool guests for three weeks.

Fortunately, all four manatees under the Center’s care survived and were uninjured. Their tanks and filters also remained intact, but the pumps were damaged.

Other infrastructure fared even worse. The Category 4 storm destroyed the Center’s veterinary clinic, laboratory, quarantine pools (where new arrivals go), and the tent where the team cultivates water plants to feed the manatees.

The Center has suffered “easily a quarter of a million dollars in damages that we are raising funds for,” said Mignucci. “We have heavy work until early of next year to get back into the routine.” But importantly, the team is still able to keep the manatees safe and healthy.

“I think the main message is that even though we have been devastated by a hurricane, both at the human level and at the wildlife protection level, we’re standing up, shaking it off, and starting again,” said Mignucci. “Puerto Rico se levanta (will rise).” 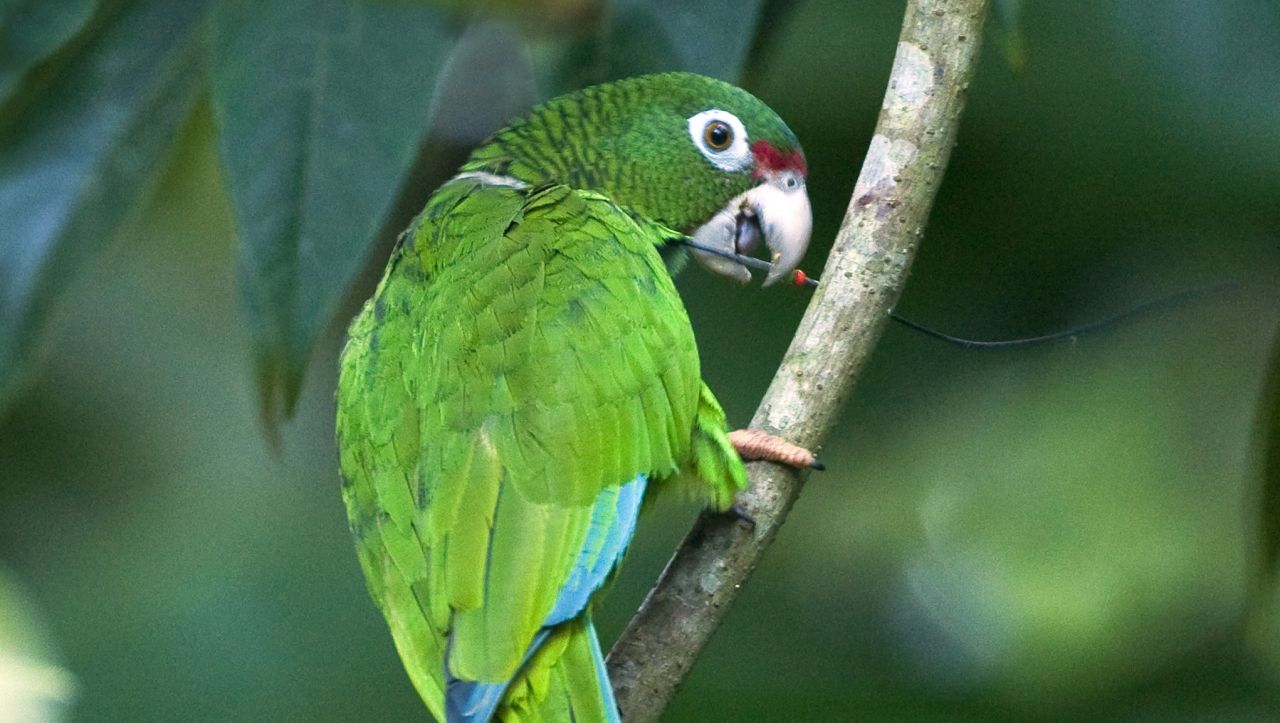 NATURE’s Viva Puerto Rico episode also focused on the Puerto Rican parrot, a verdant bird endemic to the island. The U.S. Fish and Wildlife Service (FWS), along with the Puerto Rico Department of Environmental and Natural Resources (DRNA) and the U.S. Forest Service, manage a recovery program designed to bring the critically endangered species back from the brink.

In the wild, Puerto Rican parrots currently live in two locations: El Yunque National Forest in the northeast, and Río Abajo State Forest, farther west. Meanwhile, aviaries in the vicinity of each forest house captive birds as part of a breeding program that has been essential to bolstering the population. (A third group of captive birds in Maricao State Forest, in the southwest, were transferred to the aviary near El Yunque shortly after the hurricane.)

In preparation for the hurricane, caretakers moved the captive birds into shelters, and rode out the storm in close proximity. Ricardo Valentín, an aviculturist with DRNA, knows the drill well. He’s been working with Puerto Rican parrots for nearly three decades, and lives at the Río Abajo Aviary for the bulk of each week.

“Let’s put it this way: by the time we get a tropical storm alarm, we already are preparing for a hurricane,” said Valentín in a phone interview on November 1.

All captive birds—approximately 400 of them—survived the storm. However, there were some stress-related deaths during subsequent days, according to Tom White, a wildlife biologist with FWS who, along with his wife, sheltered with the captive birds at Luquillo-Iguaca Aviary, near El Yunque National Forest.

The storm took a toll on infrastructure, too.

At the Río Abajo Aviary, fallen trees and debris trapped Valentín and biologist Brian Ramos on site for eight days. “Not only that, we lost electricity and the water system was severely damaged. And that’s the thing, the water system is underground—it was that bad,” Valentín said.

While Valentín’s house and the larger bird cages survived relatively intact, most of the smaller cages at Río Abajo Aviary were destroyed, he said. Thankfully, Luquillo-Iguaca Aviary escaped with less infrastructural damage.

Parrot habitat, however, is in tatters.

At Río Abajo, about 80 percent of the forest was severely affected, Valentín estimated. “There was so much damage that the only trees that remained with any kind of fruit were the [royal] palms,” he said. The silver lining is that the damage was patchy, leaving spots of surviving flora amid the wreckage. “There are areas that are still very useful for the parrots, and areas that will take a long time to recuperate,” Valentín said.

It’s also encouraging that Puerto Rican parrots aren’t picky eaters. They’re generalists, able to consume the leaves, fruits, or seeds of more than 40 species of trees and shrubs, according to Valentín. “That helps them in this situation, where most of the food is destroyed, but there is still some kind of food in the forest,” he said.

Valentín noticed the parrots’ survival instincts kick into gear shortly after the storm, when he witnessed more than 30 birds foraging on the ground as if they were chickens—a rare behavior for a canopy-dwelling bird.

Of the roughly 134 to 150 wild birds thought to be living in Río Abajo State Forest before the hurricane, at least 90 have been confirmed alive, according to Valentín. He attributes the high survival rate to supplemental food that his team provided during the aftermath of the storm. “We fed the wild population and avoided losing birds to starvation or having the flock disperse and abandon the forest looking for food in far off places,” he wrote in an email.

The scenario is more bleak at El Yunque National Forest, where the wild parrot population is much less accessible to the aviary, which is about a 25-minute drive away.

“El Yunque National Forest looks like it was completely burned,” said Marisel López-Flores, the FWS project leader of the Puerto Rican Parrot Recovery Program, in a phone interview on November 1.

Debris and fallen trees have made it difficult for her team to reach the areas of the forest where parrots are known to live, and determining the status of the wild population has been challenging, she said.

Before Hurricane Irma hit in early September, conservationists counted about 60 parrots in El Yunque National Forest—the most since 1967, according to Jafet Vélez-Valentín, an aviculturist at Luquillo-Iguaca Aviary. After Irma, an incomplete survey located about 35. But it’s unclear how many birds survived Maria.

“We have had some sightings, but we can’t exactly tell how many birds we have right now,” said López-Flores. “Hurricanes are a natural dispersal of birds,” she added. When the breeding season arrives in January, she hopes her team will have a better idea of how many birds survived, because parrots typically return to their breeding sites.

Nesting season for vulnerable leatherback sea turtles—featured in Viva Puerto Rico—had ended by the time Hurricane Maria struck. But critically endangered hawksbill turtles were in the peak of their egg-laying, according to Carlos Díez, the sea turtle coordinator for DRNA.

The hurricane made landfall in the southeast, a crucial area for hawksbill nesting. Before the storm, conservationists had counted about 350 nests in the region, which includes beaches in the municipalities of Humacao, Yabucoa, Maunabo, and Patillas. During a November 1 phone interview, Díez predicted that “nesting production is going to be very low” this season.

Since our call, conservationists have started assessing the damage to nesting beaches, and the immediate picture is grim. At Humacao Nature Reserve, the most important hawksbill nesting site in mainland Puerto Rico, they estimated that all 90 nests that had been incubating before the storm were lost. The nests had comprised 53 percent of all nests laid there this season, according to Díez. Preliminary assessments in Maunabo and Patillas have also revealed major nest loss, he wrote in a follow-up email.

“In Puerto Rico we have a serious problem of coastal urban development, so the combination of losing the coastal vegetation and erosion by hurricane Maria, together with urban development, is a major threat for this [critically] endangered species,” Díez wrote.

In its wake, the storm also left a lot of debris, including felled trees from coconut plantations and the vestiges of fences designed to prevent sea turtles from crossing the road. These types of obstacles can hinder hawksbill turtles from finding nesting sites, and hatchlings from reaching the sea, according to Díez.

Still, life has found a way; mere days after the hurricane, hatchlings were reported in Patillas, Díez said. And he has received reports of nesting activity in Maunabo and in Humacao. 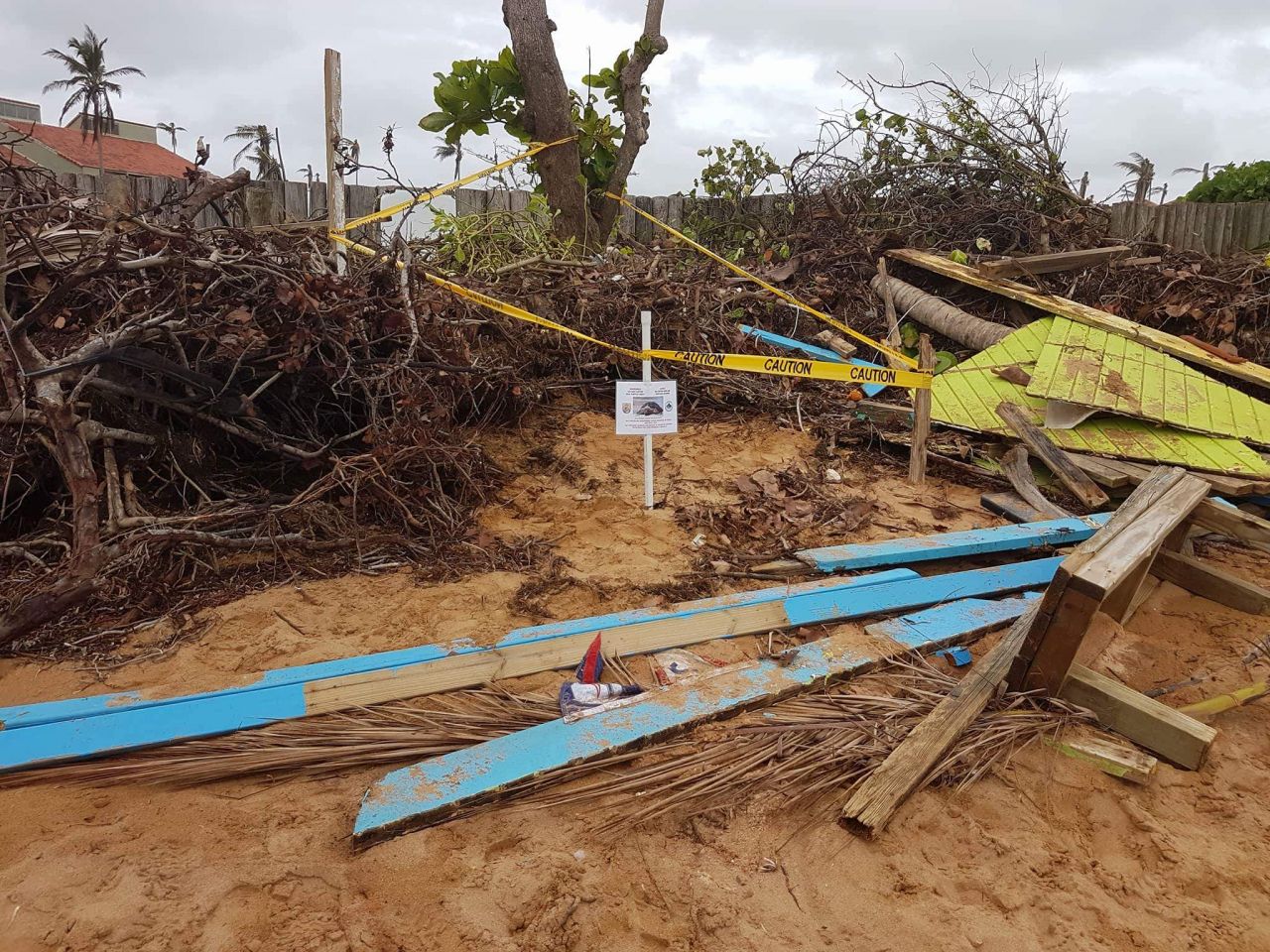 A sea turtle nested on a beach in the municipality of Humacao taken on October 27, 2017. Courtesy of Carlos Díez/DRNA.

Meanwhile, off the west coast of Puerto Rico on Mona Island, where formal surveys have continued uninterrupted, researchers have counted more than 700 hawksbill nests and documented few losses, according to Díez. But he cautions that the number is low compared to nest tallies during previous seasons at this time of year.

For his part, Díez is particularly concerned about the hurricane’s impact on coral reefs, which are important feeding grounds for hawksbills, as well as the endangered green turtle. “The hawksbill turtles, they feed on sponges, and also they use the corals as shelter,” he said.

Unfortunately, according to Díez, dramatic coral fragmentation and seagrass debris have been observed along Puerto Rico’s coasts, and sponges and other invertebrates have washed up on many beaches, including along the islands of Culebra, Vieques, and Mona. He hopes to secure funding for a rapid assessment of the feeding grounds and sea turtles foraging there. (He wrote a funding proposal by headlamp.)

Despite Maria’s upheaval, Díez thinks sea turtles will recover. “I am still optimistic that turtles and native coastal vegetation would come back. However, it may need some help from us to be sure the natural process of recovery can continue,” he wrote. “Of course, for this to happen, we need also to recover.”