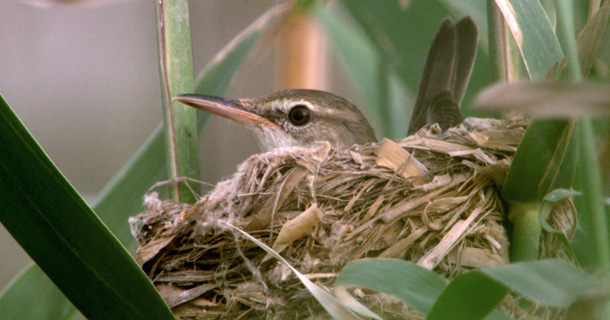 • This bird is named after Basra, the capital city of the Basra Province in Iraq, also Iraq’s principal port city. As the name suggests this has historically been one of the few places in the world where this rare bird lives and breeds.

• Basra reed warblers are indigenous to the Mesopotamian Marshlands, and their presence is an indicator of the general health of the marshes. Their population was devastated when Saddam Hussein drained the marshes in the 1990s to displace the Marsh Arabs who rebelled against him.

• They are found in aquatic vegetation near shallow fresh or brackish water, usually in dense reed beds. When they are migrating or wintering, they can be found in mangroves, thickets, or even woodland undergrowth near small pools of water.

• For a bird that gets so much attention and is such an important indicator of wetland health, this species is quite plain looking; with muted, dusty brown plumage, a yellowish-white belly and dark eye stripes.

• These songbirds are usually found in pairs or alone, but when they migrate to East Africa during the winter, they are found in loose groups, like a family reunion.

• This is a passerine bird, meaning “sparrow-like.” These birds are grouped because they have similar foot structures which are perfect for perching.

• These insectivores are experts at perching in dense reed beds and foraging for food.

• Their nests are deep baskets made from weaving grass and other materials between reed stems above the water.

• They are on the International Union for Conservation of Nature (IUCN)’s 2010 Red List, meaning that the population is endangered and rapidly decreasing.

• Despite the discouraging population and drought surveys which were released in 2003, their breeding area is greater now than any time since 2003 due to restoration efforts.

• This species was known only to breed in the wetlands of Southern Iraq, but after Saddam Hussein drained the marshes, they have relocated to other habitats, like Israel, which is a good sign for the survival of the species.

• With the continuing restoration of the wetlands, assisted by the efforts of experts like Dr. Azzam Alwash, Basra reed warblers are returning to their home in the Mesopotamian Marshes.