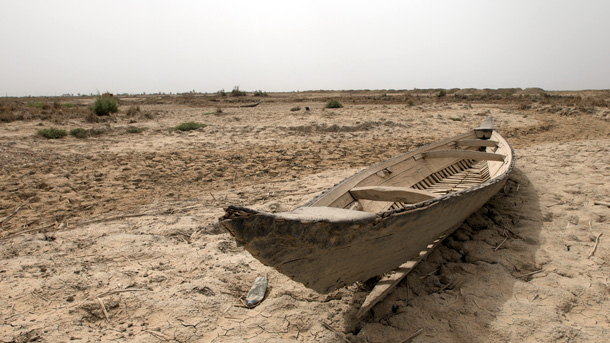 The task of restoring water to Iraq’s marshlands is a difficult and complicated one. First, it involves the enormous engineering aspect of breaching the embankments and canals built by Saddam in the 1990’s to destroy the unique habitat of the Ma’dan, Iraq’s Marsh Arabs. And in today’s world, the restoration must also take on the continuing impact of war, hydroelectric dams, droughts, political sanctions and treaties, a general lack of conservation policy and global warming.

Since returning to the marshlands in 2003 from his adopted home in the United States, Azzam Alwash has struggled to achieve his goal of resurrecting the historic wetlands area for the indigenous people and wildlife against all of those challenges. As the area comes slowly back to life, Marsh Arabs, who were in exile, have begun to return to the region to begin their lives there again. And many unique bird species, such as slender-billed gulls, marbled teal, and endangered Basra reed warblers, have also repopulated the area. It is a hopeful start against long odds.

Iraq is a desert country sustained by waters which flow down the Tigris and the Euphrates Rivers through Turkey and Syria, and by a network of smaller rivers from Iran, some of which feed the Tigris. There are few formal regulations on water usage between these countries. Tensions surrounding water usage ignited in the 1970s when Turkey began the Southeastern Anatolian Project (GAP) in order to bring power to its southeastern provinces. The GAP is still active, and Turkey now has a total of five dams on the Euphrates. Syria has also utilized the Euphrates by constructing three of its own dams.

While dams have brought electricity to Turkey and Syria, they have also restricted water flow to Iraq. This reduced water flow has exacerbated the effects of a devastating three-year drought that is still affecting the nation. Rainfall has at times been a mere 30% of the average. Turkey has largely resisted increasing the water flowing from their dams because of oil disputes with Iraq, though in 2009 they did increase water flow to Iraq, but it lasted for only 30 days.

Water not only rejuvenates the marshes but supplies necessary drinking water for the Marsh Arabs and their livestock. Before Saddam’s restrictions, dams and drought, the natural water flowing through the marshes was strong enough to flush salts and toxins through the river bed, making the water potable. Since the destruction of the marsh certain areas of water remain too stagnant and salty to drink. Marsh Arabs have also noticed that emerging plants and fish are often saltwater species. As part of local efforts to restore water flow and biodiversity, Alwash’s team has also been installing regulators to hold and release water in an attempt to duplicate the seasonal flow that once occurred naturally in the marshlands to control water salinity.

Restoring these marshes is recognized as the largest habitat recreation project in the world, and has a long way to go. But, Alwash’s efforts have directed the devastated marshland towards a return to Eden. The team plans to complete the construction of a ninth flow regulator by April of 2011 and hopes to restore enough of the area to begin efforts to make the Central Marsh into Iraq’s first national park and eco-tourism attraction. But the availability of water, as well as continued instability, are certain to remain major challenges for Alwash’s team.