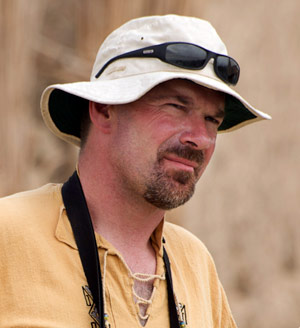 When you were approached by Nature to direct this film, why did you agree to do it? What compelled you to risk your life to bring Azzam Alwash’s story to the screen?

There are many reasons why I chose to do this project. Just the name of the Mesopotamian Marshes conjures up a mythic, romantic, timeless place – somewhere that appeals to my sense of adventure (I rock climb, surf, scuba dive, sail and love the outdoors). I was intrigued by the story of the marshes and of trying to find out what could be done to undo the worst of human destruction. I felt there would be a story here that had resonance far beyond Iraq, a story that would have implications for many other parts of the world.

Like many people in the UK I had deep misgivings about the 2003 invasion of Iraq and the violence that engulfed Iraq afterward. Going to Iraq was also a way of investigating that and finding out at first hand what kind of country we, the western Allies, had left in our wake. One thing that I say in the film is that I wanted to tell a positive story about Iraq, because so much of what we hear about Iraq is negative and focused on the violence that we have contributed to. It felt good to be going out there to (hopefully) tell a positive story about Iraq and the Marsh Arabs. I was also very impressed with Azzam and his drive and vision. All of that contributed to the potential for an exciting, visual, cinematic story about people and their environment – all aspects that drew me strongly to the film. They were also aspects that excited my wife, and she was keen for me to do the story as well – and I wouldn’t have gone if she had been against it.

Nature asked you to conduct a survey in Iraq before committing to making this film to ensure that it could be made logistically and safely. You were also required to take a Hostile Environment Training Course before leaving for the survey. Tell us about your experiences during the survey. After the survey were you completely convinced this film could be made or did you still have concerns?

The survey was a combined filming/survey trip. We set it up at relatively short notice so the security team was really chosen on the basis of who was available, although we had spoken to a number of security teams before. I had a brief plan, based on conversations with Azzam and my own research, on what we would try and do that trip, but basically we had three important goals – we wanted to see the extent to which the marshes had been restored, because if the restoration had been very limited then basically there would have been no story. Secondly we wanted to meet Azzam and get a feel for him and his work, to assess whether he was a strong enough character to carry the film. Finally we wanted to film some of the large flocks of winter migratory birds, because we knew this would probably be our only chance. Assuming all of the above went OK I also had to assess whether a film could be made without compromising our safety too much. The reality of a place like Iraq is that most of the time, if you work with a security team, you’ll be fine. The problem is if you happen to turn up in the wrong place at the wrong time then you could die. For example the Basra Air Base, where we were staying, is regularly hit with rocket attacks. Mostly the attacks are harmless, but there have been fatalities. Or if you attract too much attention and aren’t careful you can make yourself a target, either for a bomb or for kidnapping. All of those factors drastically affected our ability to move around and make the film.

On the first night I found it difficult to sleep, lying in my bed with my body armor in arms reach and the sound of Black Hawk helicopters chattering overhead. Just getting out to the marsh areas took hours and involved regular stops at checkpoints. We didn’t even get out into the marsh on our first full day because the security team wasn’t happy about our safety. BUT when we did get out it was fantastic to see the marshes and the Marsh Arabs. And then later to see huge flocks of marbled teal was breathtaking. Azzam was clearly going to be a great contributor, and suddenly I felt we really could have a great film on our hands. Even so, on our last day of filming we were aware of big explosions coming from the direction of Basra, so it was clear that security was going to be an issue throughout the production, potentially compromising our ability to even finish the film if things really went belly-up. It was also clear it would be a difficult film to make, even if things didn’t get more dangerous. If the weather didn’t work out for filming, the security situation meant we couldn’t necessarily go back to the same location the next day, or even at all. And staying longer in the country doesn’t necessarily work because there are relatively few roads and therefore the longer you stay in the country the more chance people have of hearing about your presence and what you’re up to. Then they could just put out some bombs on likely roads on the off-chance of us driving by.

How many filming trips did you make to Iraq, and what was the timeline and focus of each shoot?

We made three trips to Iraq including the survey trip. The first was end January/early Feb 2010 (5 days in the country). The second trip was at the end of March and early April (10 days in country) and the final trip was at the end of May (7 days). We tried to get the bulk of the interviews on the second trip, film all the aspects of Saddam’s drainage schemes, the archeological heritage, and catch a sense of the seasons changing. On the final trip we went with a mental list of things we wanted to see, to catch the beginnings of summer in the marshes and to assess the extent to which the second drying of the marshes was going to be a problem. We split the second trip in two, basing ourselves near Nasriyah initially and latterly in Basra, mainly to help with security. It meant we varied the routes we took into the marshes, the locations we went to and generally avoided having to cross inter-province borders which were the checkpoints we had most problems with on our survey trip. For the final trip we based ourselves exclusively near Nasriyah.

The general elections in Iraq were taking place while you were still in the process of filming. Did the elections affect your shooting in any way?

We had a lot of discussion about the timing of our second and third trips because of the timing of the elections and the results being announced. The second trip was scheduled to fit in after the elections but before the count was completed to minimize the risk of getting caught up in any political instability of the elections themselves and then the results being announced. As it turned out I think our final trip coincided with some recount results being announced, although by then it was clear that the security situation in the county was getting worse. Both statistically and anecdotally it was clear that each time we went back the security situation was getting worse. And it has continued in that way since unfortunately. In fact our security team was hit by a roadside bomb attack in September. Fortunately none of them were hurt, but both Stephen Foote (the cameraman) and I were reminded that it could have happened to us.

Tell us about your experiences with the local Iraqi people. Were they supportive of your filming work? Did they seem optimistic about their future and the future of the marshlands?

The locals were fantastic – polite, warm, welcoming, seemed generally to support what we were doing and were helpful. However that was in one area of the marshes. Elsewhere, as you can see in the film, tribal differences meant things didn’t run as well as we hoped! As far as the future goes many of the people we spoke to are cautiously optimistic, but few believe the marshes will ever be as they were 20 – 30 years ago. The floating villages of traditional Marsh Arab life have probably disappeared for good, but many aspects of the Marsh Arab way of life can be seen. But in a place like Iraq, where you can’t even take tomorrow for granted, no one is getting carried away.

Toward the end of the film, Azzam says the following:

Whenever I’m inside the marshes I feel at peace, listening to the sound of the wind going through the rushes, the sound of birds calling in the distance. It’s wonderful to have that feeling back again.

What will be your memories of working in the marshes, and do you think Azzam will be able to fulfill his dream of converting the marshland into an eco-tourism mecca?

It is wonderful being in the marshes and a real privilege to have been there. Every time I was out in the boats I could feel a mental weight lifting from my shoulders. The marshes are beautiful, peaceful and calming. It is easy when you’re out there to forget you’re in Iraq, a place where we have to stay on military bases, travel with security and wear body armour. The tranquility of the place is magical and the vibrancy of life in the marshes is a real tonic and contrast to the Iraq of deserts and violence. I think Azzam’s vision is intoxicating, and I hope it can be realized. I fear it will take a long time, but I hope that one day my children may be able to visit somewhere their Dad made a film about and see a country transformed and the marshes restored.