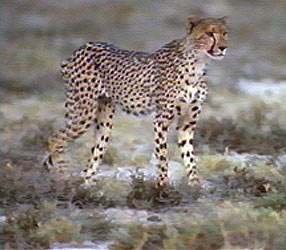 Cheetahs must learn to stalk their prey. When it comes to cheetahs, speed kills. Indeed, cheetahs rely on their remarkable acceleration abilities to overtake fast moving prey, such as small antelope. But speed alone isn’t enough to ensure a successful hunt, as NATURE’s Cheetahs in a Hot Spot shows. Baby cheetahs must also learn to stalk their prey and perfect a carefully choreographed killing sequence known as “chase-trip-bite.”

Before the chase begins, however, cheetahs must creep within just a few hundred feet of their target, because their bursts of speed don’t last long. Then, quickly accelerating to nearly 60 miles per hour, the cheetah overtakes the prey in a surprise rush. Once close, it lashes out with a front foot, and a specially designed rear claw catches the hind leg of the victim, tripping it.

A cub has to master the “chase-trip-bite” sequence. To finish the kill, the cheetah must then grab the winded animal’s throat in its jaws and clamp the windpipe shut, suffocating the prey. Once it is dead, the cheetahs will start snacking on the animal’s rear flanks, where the most nutritious meat is found. 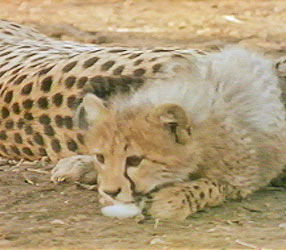 A cub has to master the “chase-trip-bite” sequence.

But some cubs can be slow learners, notes Person. “Young cheetahs may start their rush too far away, or get the chase and the trip right, but become confused about where to bite,” he notes. “Even though it is an instinctive behavior, they have to perfect it.” Cheetahs in a Hot Spot highlights one such trial run, in which a cheetah pack successfully downs an antelope, but then has trouble finishing off the crippled animal. Eventually, however, they learn to earn their meal. “If they don’t get it right,” notes Person, “they’ll die. Nature has a way of sifting out the less capable cubs.”

Even successful hunters often face challenges once the hunt is over. Lions, hyenas, and other animals often try to steal the cheetah’s freshly killed meal. The cheetahs are sometimes so exhausted from the chase, they can’t prevent a thief from walking off with their kill.

Additional Web and Print Resources
Finding a Home
About

The Whale Detective
Living with Snow Leopards–Tashi’s Story: A NATURE Short Film
The Good, the Bad, and the Grizzly
Voyage of the Lonely Turtle
Natural Born Rebels | Episode 1| Hunger Wars
Equus "Story of the Horse" | Episode 2: Chasing the Wind