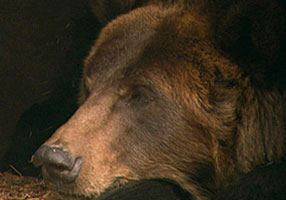 A precise, fixed definition of hibernation is somewhat elusive. A common way of explaining hibernation is to call it a state of winter dormancy, a period of inactivity in which an animal will conserve energy by maintaining a lowered body temperature for most of the winter. Yet there are also creatures, such as the North American desert tortoise, that employ a comparable state of dormancy and body temperature regulation to protect themselves against extreme heat. This may be called aestivation. There is another term, however, brumation, that refers to a winter state of sluggishness in certain reptiles and amphibians, which don’t maintain a high body temperature. Body temperature, then, may be somewhat misleading as a telltale indicator of hibernation. Perhaps the best way to look at hibernation, given the circumstances, is as a set of seasonal adaptations that animals employ to survive regularly occurring periods of famine. Here is a closer look at the adaptations of five animals that face the challenges of a winter climate:

Northern bat species overwinter in caves where they can maintain a lowered body temperature that will allow them to pass the winter months, when their prey will disappear, without feeding. The choice of a cave is paramount: too warm, and the bats’ level of activity will rise, and they’ll starve; too cold and the bats will freeze or exhaust themselves, shivering to keep warm. To find the right cave, the bats must migrate — sometimes hundreds of miles. Bats from the north may fly south, while bats from the south may fly north. With experience, the bats learn which caves are best suited to winter survival — and they will return to a good cave year after year, thousands upon thousands of bats in a single cave.

Bears are often thought of as a very typical hibernating animal when, in fact, their winter behavior is quite extraordinary. In the late summer and early autumn, bears will begin to gorge on food, eating five times their usual diet to accumulate a five-inch layer of fat that will sustain them the entire winter. In the late autumn the bears will lose their appetites and seek out a potential den. Black bears make their dens in a hollow tree, under roots, beneath a pile of brush or branches. Grizzlies dig their dens into the side of a hill, covering the floor with branches and grass. Once in its dens den, a bear’s body temperature will never drop very far below normal and, though it becomes groggy, a bear is easily roused by outside disturbances. What’s so unusual is that, in spite of their nearly normal metabolism their metabolism is not nearly normal, but rather quite extraordinary, bears don’t need to drink or urinate all winter long. They survive on the thickness of their fat alone, while nitrogen, a potentially harmful metabolic waste product that humans excrete through urination, is actually recycled into protein — which helps maintain the bears’ muscle tissue, even as they are inactive all winter long! Meanwhile, the bears stay hydrated because water is not lost through urination. These and other physiological processes — such as how the bears keep their bone strength during these prolonged periods of inactivity — are currently being studied for their potential to help humans offset the negative effects of aging, osteoporosis, space travel, and the lethargy of modern day office work.

Chipmunks are a kind of ground squirrel known for their enormous, expanding cheeks, which, each fall, they will fill to capacity with load upon load of seeds. The seeds are carried back to the chipmunk’s underground system of hibernation burrows, where there is a special chamber reserved for foodstuffs. Chipmunks spend most of the winter underground in a state of dormancy, their body temperatures lowered to conserve energy. Yet the chipmunks won’t hibernate all winter. By March they will be awake again for mating season, in spite of the often still-deep snow. It is then that the stash of seeds will prove

Deer mice range from the northern tree line in Alaska and Canada south to central Mexico, covering much of North America. They are a small species, 10 to 24 grams, roughly the size of house mice, yet they do not hibernate — somewhat surprising for a creature so tiny. Instead, they employ a series of adaptations to conserve energy. First, they build deep nests in tree holes, stumps, logs, or even cabins or other outbuildings. They also huddle together, as many as ten or more mice, to conserve heat. Deer mice are nocturnal, so during the day, they may go into torpor, a state of inactivity in which their body temperatures drop. Usually the torpor ends by late afternoon. Altogether, these three adaptations will allow a deer mouse to save up to 2.5 times the energy of a mouse that doesn’t employ these techniques.

Wood frogs can be found farther north than any other reptile or amphibian in North America, from the northeastern United States, across Canada, and into Alaska. In the winter, one of these frogs may be found underneath a pile of leaves, rock hard and cold — frozen, apparently. The frog isn’t dead, however, but engaged in a physiological process known as frost-tolerance in which as much as 65 percent of its total body water will freeze. The frog survives by not allowing ice to form in the cells themselves, which could slash and permanently damage the membranes. The frost-tolerance process is triggered by the onset of cold weather, when the frog’s fight-or-flight response releases adrenaline into the blood, which in turn, sets off a response in the frog’s liver that converts glycogen to glucose. This glucose is what prevents the actual cells from freezing while special proteins allow only the liquid within the frog to be concentrated together and frozen. Meanwhile, the frog’s breathing and heartbeat will stop — until the spring, when the frog will thaw out and resume breathing and pumping blood again. Although many amphibians survive the winter by digging down into the ground, below the frost line, three other North American frog species employ the wood frog’s method of frost-tolerance: the gray tree frog, spring peeper, and chorus frog.