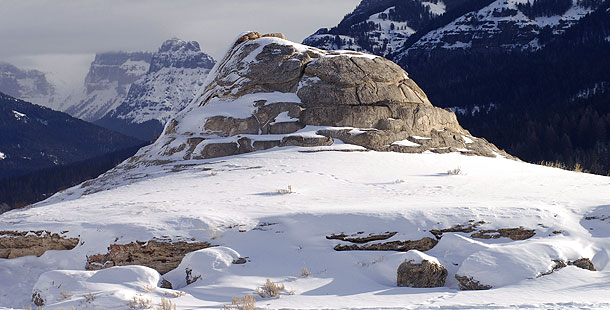 In point of fact, not very much is known about John Colter, a man who has nevertheless attained a certain legendary status among figures of the American West. Like all legends, his is an account of the past in which the bias of good storytelling has superseded most notions of historical accuracy.

Perhaps the most cherished aspect of Colter’s story is this: in the winter of 1808, he ventured, alone, into the territory now known as Yellowstone National Park, where he first encountered the area’s incredible geothermal activity: hot springs, bubbling mud pots, tremendous exploding geysers. When he returned, no one believed his fantastic tale of rupturing sulfurous earth — and so for years this region was derisively known among trappers as Colter’s Hell. The truth, however, is that while there was a place the trappers called Colter’s Hell, it was some fifty miles outside of Yellowstone Park, just west of present-day Cody, Wyoming, an area of somewhat less spectacular geothermic activity. The mix-up can be traced to a confusing passage in the book Yellowstone National Park, written in 1895 by Hiram M. Chittenden. Although Chittenden later amended this passage, the myth was hard to dispel. Later, it was further distorted by Stallo Vinton, an early Colter biographer and editor of the 1935 edition of Chittenden’s book, American Fur Trade.

What is known of John Colter is that on October 15, 1803 he joined the famous expedition of Lewis and Clark in Maysville, Kentucky. He would be a permanent member of the expedition, traveling through the Rocky Mountains to the Pacific Ocean and back. In 1806, when the returning expedition reached what is now North Dakota, Colter parted ways with Lewis and Clark, joining up with two fur trappers from Illinois, Forrest Hancock and Joseph Dickson, on their way to the Yellowstone River. In the spring of 1807, Colter struck out on his own. He was soon recruited by Manuel Lisa of the Missouri Fur Company, and traveled up the Missouri and Yellowstone to the mouth of the Bighorn River, where Lisa built a log fort known as Manuel’s Fort.

From here Colter embarked on the journey that would make him a legend. It was the autumn of 1807 when he left, winter of 1808 before he returned, and today, the only written account that remains of Colter’s journey comes from Henry Brackenridge, a writer and frontiersman, who heard the story from Maneul Lisa:

“[Lisa] continued his voyage to the Yellowstone River, where he built a trading fort. He shortly after dispatched Coulter, the hunter before mentioned, to bring some of the Indian nations to trade. This man, with a pack of thirty pounds weight, his gun and some ammunition, went upwards of five hundred miles to the Crow nation; gave them information, and proceeded from them to several other tribes. On his return, a party of Indians in whose company he happened to be was attacked, and he was lamed by a severe wound in the leg; notwithstanding which, he returned to the establishment, entirely alone and without assistance, several hundred miles.”

It was on this “five hundred mile” trek that Coulter, it is believed, became the first white American to travel through what would later be Yellowstone National Park. No one knows Colter’s route for certain. Speculations are based on a path marked “Colter’s Route in 1807” on the map of the West that William Clark published in 1814. Although this map is known to be distorted, historians have situated Colter’s route inside Yellowstone with a good degree of certainty. Colter would remain in the wilderness until 1810, when he returned to St. Louis — where he is supposed to have related his tales and the route of his journey to Clark. One tale, dated later in 1808, seems to have ensured Colter’s legend. After his journey through Yellowstone, Colter and fellow Lewis and Clarke veteran John Potts were apparently captured by members of the Blackfeet tribe on Jefferson River. Potts was killed and dismembered while Colter was supposedly stripped naked and told to run for his life. The Blackfeet, it is said, intended to hunt him for sport, but Colter managed to elude them and escape to Manuel’s Fort — where he appeared from the woods, gaunt, hungry, and prepared to tell a story that would endear him to history.