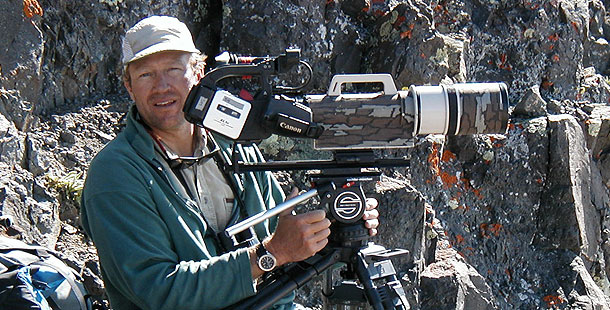 Shane Moore has been a nature and wildlife documentary filmmaker for more than three decades. He has made several films for NATURE, include most recently The Good, The Bad and the Grizzly. Below, he shares thoughts on the making of Christmas in Yellowstone.

Q: You live in Jackson Hole, Wyoming. Does your proximity to Yellowstone take away from the excitement of shooting there?

A: No, I wouldn’t say that. I have a real passion for the place, and Yellowstone is particularly stunning in the winter. That’s my favorite time, it’s just so magical, and it’s really the best time to see a lot of the wildlife. The wolves, for example, are quite visible in the wintertime.

You captured so many different animals in the film. Was one the most difficult?

The wolves were difficult. We could see them nearly every day, but often the distances were very great, and we really have to be careful not to disturb them in what they’re doing. So often it’s just a real waiting game with the wolves. Some of the other animals were not so easy, either, like the foxes. We really wanted to catch the foxes mousing. That’s always very hit-or-miss. The foxes can walk around on that snow — it’s firm enough to support their weight — yet they leap five feet up in the air and come down on their nose and have to break through that hard crust to get at the mice down below. It just seems like a remarkable way to earn a living!

How much does luck factor into wildlife filmmaking — in terms of spotting the animals to begin with, and then capturing fascinating behavior?

It’s a combination of the right opportunity and being prepared. My formula has always been that if you spend a lot of time in the field, you will see magical things. It’s hard to predict what they might be. We knew we wanted to film wolves, and we dreamed about actually filming a hunt, and so those sorts of things do take time and luck. And obviously a lot goes into knowing where to be and when to be there.

What does a typical day of filming look like — are you up before dawn?

Oh, well before dawn. With wolves, for example, we would often go out when there were several hours of darkness left, and simply listen. Their howls carry very far, you can hear them howling at least five or more miles away. Often that’s the way we located them, just by standing in the cold and listening.

And would you stay out until dusk?

Sometimes. But a lot of the filming was even during the night. We wanted to film a lot of night scenes and time-lapses, so we used some of the newest in digital SLR cameras, which are now actually able to do exposures that will give night scenes some real punch. We did a lot with stars and night-lit scenes, so, yes, we had some very long days!

What was the coldest it got during your filming?

45 below, according to the official Park Service recording of that day. It was around mid-December.

And were you actually out in the field that day?

Yes, I was out filming, and some of those scenes from that day actually ended up in the film. The bison, for example — something about that first real cold snap really seems to set the animals moving, and the bison were streaming to lower elevations in big herds. The sound of their feet squeaking on the snow at that temperature is just surreal! Some people might think we actually made a fake sound, but it is the real sound, it’s really striking.

How does the extreme cold affect filming?

For one, cables can snap with a slight touch when it’s minus 40, so you have to be very careful moving cables. Batteries of course don’t perform very well in the cold, so often we have to keep a battery inside the parka to keep it warm. At times we could hardly see through the cameras’ viewfinders, because they don’t react that well to the cold either. Almost all of our cameras say “for use to 32 degrees Fahrenheit,” so we were really pushing that!

Did you have to trek long distances with the equipment?

We did. We had some real long ski trips, in which case we’d put all the gear onto sleds. They were tremendous loads; our sleds were about 150 pounds each. And we did some backcountry trips with photographer Tom Murphy, which were extremely strenuous. It all looks quite tranquil and beautiful in the film, but there is definitely a good amount of work involved. We had very cold temperatures and probably 50 mile-per-hour winds. It was a real blizzard, and actually Tom seriously injured his hand so we had to cut short our filming. It was pretty close to survival conditions up there. I really had to watch any exposed skin, which in just minutes would be frosted. But I love the serious backcountry trips and somehow that’s a cherished memory for me.

Was it a challenge to keep up with Tom Murphy?

It was. He is a remarkably tough individual. And he doesn’t pick the easy routes for us guys carrying a lot of cameras! But he’s such a delight to be with in the field. And the breadth of his knowledge on Yellowstone is just incredible. We were in awe the whole time.

When I think of nature filmmaking, the “uncertainty principle” comes to mind — that by observing something you change its properties. Do you have to be careful not to alter the environment whose authencity you’re trying to capture?

Absolutely. It’s remarkable that all the animals in Yellowstone in the depth of winter are on the ragged edge of survival just about the whole time. Maybe with the exception of the wolves. Some of the predators can do well, because the other animals are weakened. But it’s such a struggle for most of them, that literally if we were to disturb an animal, run them off of a favorite feeding area, for example, that could kill them. So we really had to be careful, and that created a lot of challenges because a lot of the filming that we did was at great distances. The wolf hunt we filmed was from a distance of more than a half-mile. So, yes, we took great pains not to disturb them.

Do you hope more people will visit Yellowstone?

I always have mixed feelings about that. Fortunately Yellowstone is a place where the visitation is controlled well. But after a film I did with Wolfgang Bayer on Yellowstone in 1981, visitation picked up, and for a while we questioned if we were doing it a good service. But I think this is everybody’s park. It’s the whole world’s park, and I think the film is a great way for a lot of people to experience it if they can’t make it there. The visitors and wildlife can coexist if the people are careful and respectful. And I think if people don’t get out and enjoy it, and have some kind of meaningful experience, there’s really no reason for us to conserve these kinds of places.