Basking sharks are the second largest fish in the seas, averaging about 25 feet long, though some have been reported at over 30 feet, and even 40 feet long. 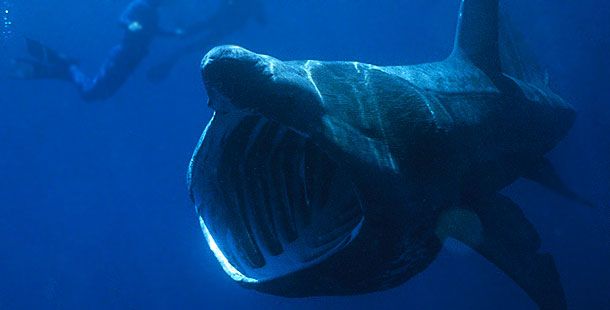 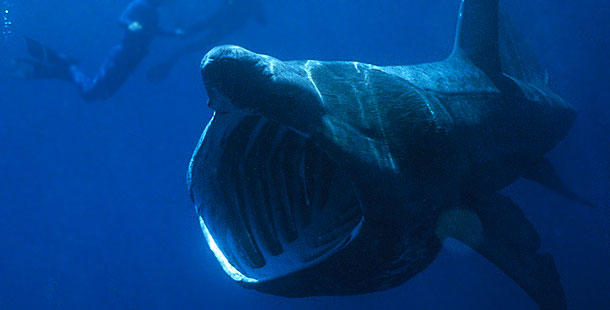 They have been mistaken for monsters. Sometimes traveling in single file, nose to tail, with the exposed tips of their snouts, dorsal fins and tail fins looking for all the world like the coils of an enormous sea serpent, it’s not surprising they have been inadvertent stars of many tall tales of the sea. Just one of these gentle giants is unmistakably huge. Basking sharks are the second largest fish in the seas, averaging about 25 feet long, though some have been reported at over 30 feet, and even 40 feet long. Only the whale shark is larger.

Basking sharks get their name because they are most often seen feeding near the surface and appear to be basking in the sun. They are filter feeders, and actually “eat” by swimming along with their mouths wide open, straining food from the water. The water passes through their enormous mouths (up to four feet wide) and through the five enormous gill slits which almost encircle their heads. Bristle-like “gill-rakers” in the gill slits trap their tiny prey, called zooplankton, which consists of small crustaceans, invertebrate larvae and fish eggs, while allowing the water they are carried in to pass through. It’s an extremely effective method. On average, their stomachs contain half a ton of food.

Following plankton “blooms,” basking sharks have been sighted along almost every coastline bordering both the Atlantic and Pacific Oceans. In the North Atlantic coastal areas they have typically been seen feeding during the summer months, after which these giant creatures have always mysteriously disappeared and were thought to have gone into hibernation. However, recent studies have proven that the sharks are very active throughout the year, spending more time in deeper water, feeding on deep water plankton communities.

Historically, basking sharks have been extremely vulnerable to overfishing. Between the 1950s and the 1990s, their global population dropped by 80 percent due to excessive harvesting. Unfortunately for them, they are slow-moving and passive animals, and their enormous bodies are made up of valuable pieces. Their liver makes up a quarter of their body weight and contains as much as 400 gallons of liver oil used in lamps, vitamins, lubricants and cosmetics. The sharks have also been hunted for their meat and cartilage, or simply to keep them from fouling fishing nets. Because of their size, basking shark fins are especially valuable in Asia where they are used in shark’s fin soup, aphrodisiacs and various health food products.

As with other sharks, basking sharks have a difficult time recovering from overfishing, but they are especially vulnerable because of their extremely slow reproductive cycle. While not widely researched, they appear to have the longest gestation period of all sharks, taking as long as three years; and an unusually late onset of sexual maturity that occurs not until 12 to 16 years of age. They give birth to as many as six living pups, five to six feet long, which survive in the womb by eating unfertilized eggs produced by the mother, a behavior known as oophagy.

Many countries and international conservation agencies have established laws to protect them, but because of their low reproduction rates and the pressure still placed on their populations by the fishing industry in countries where they are not fully protected, the basking shark is currently categorized as “vulnerable” throughout its range and “endangered” in the northeast Atlantic Ocean and north Pacific Ocean regions by the World Conservation Union (IUCN).