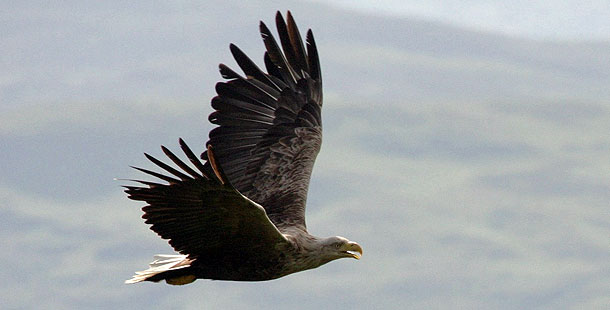 The residents of Mull are serious about protecting their wildlife, especially their white-tailed sea eagles. No one believed they would ever again see a lolair mara (Gaelic for eagle of the sea) return to Scotland after the species was driven to extinction there in the early 20th century by shepherds, gamekeepers, fisheries, and illegal egg collectors. Sea eagle populations in many of the western European countries were also affected by similar persecution, until few were left anywhere. Even a Scandinavian population, which had previously been considered healthy and safe, was faced with a dangerous decline compounded by the then widespread use of DDT in agriculture and industry. It was from this low point that a remarkable conservation success story began.

Attempts to reintroduce the white-tailed sea eagle in the 1950s and 60s were unsuccessful, but the stage was set for a reintroduction program begun in 1975 that began to make a difference. Over the next 10 years, 82 young birds were brought from Norway and released on the Isle of Rum in Scotland. Ten years after that, in 1985, a breeding pair on Mull raised the first sea eagle chick born in Scotland in 70 years. Today, Mull and the neighboring island of Skye have become the birds’ strongholds along the country’s west coast, sheltering almost two-thirds of the Scottish sea eagle population of 45 breeding pairs and over 200 wild-fledged chicks. Sea eagles have become one of Mull’s greatest assets, bringing in thousands of tourists every year, specifically to see them. The species has traveled a long way from persecuted to prized, but the population of birds is still relatively small and highly vulnerable.

Since the first breeding success in 1985, Mull Eagle Watch, in partnership with Forestry Commission Scotland, Mull and Iona Community Trust, the Royal Society for the Protection of Birds (RSPB) Scotland, Scottish Natural Heritage (SNH), Strathclyde Police and a wealth of dedicated volunteers, has been vitally important in protecting the eagles from harm. These days, that protection includes round-the-clock on-site and CCTV monitoring of nest sites each March and April to ensure the security of incubating eggs and hatchlings. CCTV footage collected can also be used in court against anyone found endangering the birds and their nests in any way.

However, Mull has also done its best to allow access to fans who want to see the protected sea eagles. Wildlife enthusiasts of all kinds, under the guidance of knowledgeable wildlife rangers, can safely observe sea eagles from a state-of-the-art hide in Loch Frisa, the only one of its kind in all of Britain. The hide features a glass front for viewing, information panels, and two television screens showing live footage of the birds from cameras placed close to the nearby nest. It’s an arrangement that manages to leave the birds and their nests undisturbed while also providing a uniquely intimate experience for the viewers.

All nest sites on the island are closely guarded. The island has a full-time wildlife liaison officer, PC Finlay Christine, and an RSPB Scotland warden, Dave Sexton. Together, they monitor all the nests and keep a close eye on all cars and ferries coming to and from the island, watching especially for egg thieves. It’s up to them to locally enforce the strict laws put in place throughout the UK to protect wild birds, laws that have recently been amended to include tougher regulations, sizeable fines and jail time. And Constable Christine and Officer Sexton have the eyes of every local on the island to help them.

Over the years, the officers have come to feel quite close to the birds in their care. Officer Sexton even posts a regular blog about the eagles at Loch Frisa, talking about what is going on in their lives and about their comings and goings. Much to everyone’s delight, he is currently assisted by information from newly-fitted satellite tags. These tags, kept running on tiny solar batteries, have been placed on two chicks from Loch Frisa and will monitor their travels for the next three to four years. The information gathered will be used to inform all future UK sea eagle reintroduction plans. In the meanwhile, satellite maps of their day-to-day movements are available to enthusiasts everywhere on the RSPB Mull Eagle Watch website.