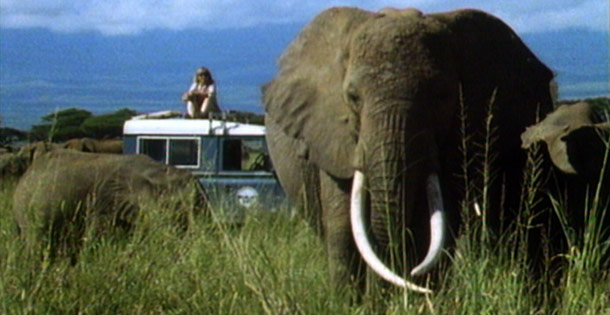 Every great family is headed by a commanding leader, and Echo’s clan was no exception. Echo, an African elephant, was a true matriarch, a wise and experienced mother who guided and protected her family for many years.

Recognizable by her crossed tusks, Echo lived with her brood in Kenya’s Amboseli National Park, a wildlife reserve of just 150 square miles. Her clan was composed of some 15 elephants, all either her own offspring, other elephants’ young calves, or adult females. (Adult males are loners until it’s time to mate.)

At first glance, Echo’s family seems to live quiet lives of grazing. In fact, their days are filled with mating battles, difficult births, health problems, kidnappings, emotional reunions, mischievous children and, occasionally, death at the hand of a hunter. Much of the drama caught in Echo: An Elephant to Remember comes thanks to famed researcher Cynthia Moss’s intimate knowledge of Echo and her ways.

Moss has been studying 50 elephant families in Amboseli in an effort to learn everything there is to know about these animals. Moss aims to document their birth and death rates, to discover how they communicate, to learn how they think. To that end, she and her colleagues spend hours under the punishing sun of the African savanna, observing the animals and collecting data on their activities.

Moss’s research is rewarding, but often difficult. Her study area is the range over which the elephants roam — an immense 400 square miles. Since Moss’s team does not tag the elephants with radio collars that signal their locations, each day Moss and her colleagues must hop in a Land Rover to search for them.

Moss and filmmaker Martyn Colbeck followed Echo and her family over the course of several years, spending about two months of each year in the field. The two set out from their tent camp at dawn each day to look for the family and film their activities.

During one field session, Moss and Colbeck decided they couldn’t risk losing Echo: she was about to give birth, something that happens only about once every four years in an elephant’s life and has rarely been recorded on film. Determined not to miss the big event, Moss and Colbeck tracked Echo and her family night and day for almost three weeks.

“We followed them for 13 to 14 hours each night,” says Moss, “and then we would radio my assistants to come and keep track of them for the rest of the day. It was really exhausting and very, very nerve-wracking. I figured if we lost them for one day, that would be the day she gave birth.” On day 18 of the round-the-clock watch, Echo finally gave birth to Ebony, a male, in an event featured on NATURE.

The Amboseli elephants make ideal study subjects, says Moss, because this population is for the most part untroubled by humans. Moss explains that she is able to document intimate events like the birth because her presence doesn’t alarm the elephants: they seem to know her voice, and they sense that she won’t hurt them.

Sometimes the adults approach her Land Rover and look in the windows, while the more adventurous juveniles explore the truck with their trunks. The elephants are comfortable enough with Moss and her colleagues that they even gather around her tent camp on occasion, the adults resting while the youngsters play under the trees next to the tents.

Given Moss’s long and intimate association with these engaging animals, it’s easy to understand her emotional attachment to her study subjects. Moss says that it is sometimes difficult not to get involved when an elephant is sick or in trouble, such as when Echo’s son Ely was born with crippled feet and couldn’t walk for a few days. “With Ely, it was so hard not to intervene,” she recalls. “I didn’t know whether or not to bring in a vet.”

“But it would have been a terrible mistake,” Moss concludes, “because he would have been separated from his mother and probably wouldn’t have been able to go back.” Ely eventually healed completely on his own. Moss continues to maintain a policy in which she keeps her distance, offering help only when an elephant has been harmed by humans.

More From Echo: An Elephant to Remember (9)
Explore more from this episode More