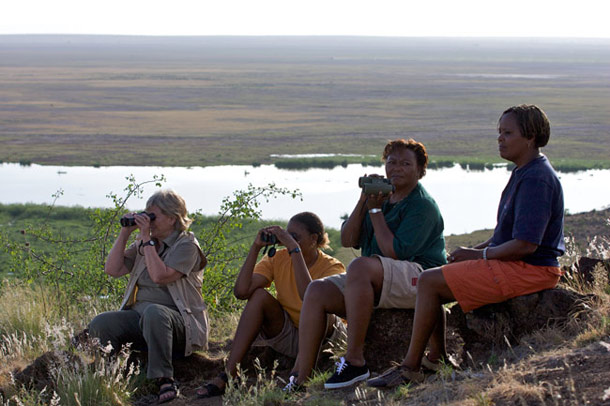 Cynthia Moss knew Echo for 36 years. She came to Africa from the United States in 1967 and co-founded the Amboseli Elephant Research Project (AERP) with behaviorist and ecologist Harvey Croze in 1972. In 2001, she created the Amboseli Trust for Elephants (ATE). She directs both organizations. Her research has become a major resource for conservation efforts on behalf of African elephants, and her scientific articles and books about them have been widely published. Her work has been featured in several wildlife documentaries, which were co-produced by and appeared as part of the Nature series.

Cynthia and cameraman Martyn Colbeck feature prominently in Echo: An Elephant to Remember, but the documentary begins with the emotional testimony of three researchers on the ATE team, one of whom was at Echo’s side as she died.

Soila Sayialel
“Echo is a very, very special elephant. She is a leader. They trusted her so well.”

Soila was born nine miles from Amboseli National Park. She joined the Amboseli Trust for Elephants as a research assistant responsible for monitoring the elephants. She’s now an ATE Trustee and Deputy Director of the Amboseli Elephant Research Project. In addition to supervising ATE field assistants, Maasai Elephant Scouts, and camp staff, she works closely with government groups, NGOs, and community stakeholders. Soila sits on a number of boards and is an Honorary Warden of Amboseli National Park. She has co-authored several scientific papers and conservation reports.

Norah joined ATE in 1985 as a research assistant. She closely monitors and collects data on the Amboseli elephants. As ATE’s training coordinator she passes on her data collection expertise to Maasai Scouts, students of elephant biology, and wildlife managers.

Katito Sayialel
“The last minute she blinked her eyes like this and just looked at me… and then she died.. It’s good one of us was there.”

Katito joined ATE as a research assistant in 1992. She assists PhD and post-doctoral students and visiting scientists in the field to study elephant social behavior, communication, genetics, leadership, cognition, growth, development, and human-elephant conflict. Katito also assists Norah as a trainer in elephant monitoring techniques. Katito was with Echo when she died.

How did you become a part of the Amboseli Trust?
I first heard of Amboseli Trust in 1985 through a colleague of mine, Norah Njiraini who was working by then with Joyce Pool, a scientist who did work on elephant Musth bull, then elephant communication. I joined Amboseli Elephant Research Project (AERP) in 1986 September.

What is your role there, and what do you do on a daily basis?
Currently I am Deputy Director and I do field work and also community work, trying to harmonize the relationship between Elephants/Maasai community and Livestock. Also I work with other stakeholders in the entire ecosystem.

What is the most rewarding aspect of your work?
The most rewarding aspect of my work is when I or we manage to mitigate conflicts, when we see the Amboseli population increase over the years, apart from last year when the drought affected the population. Also making the Maasai better understand the benefit that elephants can bring to the whole community and mostly getting to know the elephants and their behavior.

What is the most frustrating aspect of your work?
The most frustrating aspect of my work is elephant deaths either caused by humans or the drought, especially when I come across orphans with their mothers dead maybe due to conflict or due to the drought. I feel sad when I remember family members that I used to know and due to death cannot see again. Elephants are my closest friends, and I miss the ones that are dead.

Would you recommend this job to others?
There is no other job close or that can be compared to what I am doing. Some people might think I am insane, but I am very smart, since I cannot work in an office day in, day out. Life would be very boring to me. But I love my job, I love being with elephants. They are magnificent creatures.

What makes Echo “an elephant to remember” for you?
Echo the elephant will not be forgotten ever. She was and she is a celebrity. She was a true Matriarch to her family. We all miss her, and mostly she has been missed by her family.

Can you recall any ways in which Echo or other Amboseli elephants have surprised you?
Family coordination by Matriarchs, how they manage to control family members and also how tight families are bonded. How they know us by smell, voices and vehicles that we use.

What are your hopes for the future of the park?
The park will have a future when all stakeholders get together and secure space for wildlife and mitigate conflicts, but if nothing is done then there will be no Amboseli in the coming future.

To learn more about the Amboseli Trust for Elephants scientists, staff, and trustees visit http://www.elephanttrust.org/node/274

SHARE
STREAM WITH PASSPORT
Echo: An Elephant to Remember

Running With The Herd: A NATURE Short Film
Touching the Wild
My Congo
Voyage of the Lonely Turtle
Equus "Story of the Horse" | Episode 1: Origins
Super Cats: Episode 1 | Extreme Lives