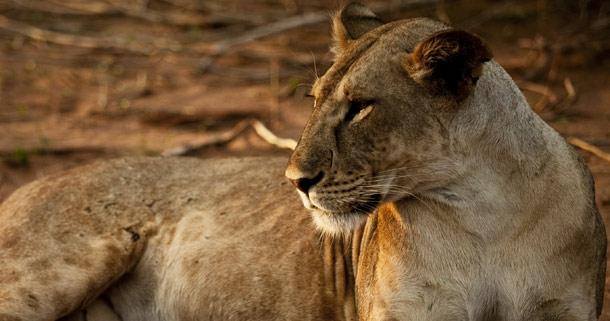 Coat: Tawny yellow coat. Adult males have a thick mane of brown or black hair. Lions are the only cat species to have prominent physical differences between the two genders.

Diet: Lions tend to eat ungulates like impala, wildebeest, zebra, giraffe, and buffalo, though they can feed on smaller animals like hares, birds or reptiles. They also scavenge, taking other animals’ kills.

Geography: The African lion used to cover the majority of the continent, with the exception of the Saharan desert and the Congo basin’s dense rainforest. The lion has since disappeared from northern Africa and now lives mostly in the southern and eastern regions of the continent.

Population Health: Vulnerable (according to the IUCN)

Threats: Humans – Urban expansion results in habitat loss, fragmentation, and a decrease in food sources. People will also retaliate against lions that feed on domestic livestock or are aggressive toward neighboring human populations. Lions are threatened by disease and ecological changes to their environment.

Dolphins: Spy in the Pod | Part 2
Equus "Story of the Horse" | Episode 2: Chasing the Wind
Super Cats: Episode 1 | Extreme Lives
Running With The Herd: A NATURE Short Film
My Congo
The Elephants of Africa