“Quite often our work is called a waste of time and resources, as lions are not endangered as a species. This is true at the moment but, as a yardstick for action, is dangerously shortsighted.”
– George Adamson

The “King of Beasts”: Vulnerable?

While Joy and George Adamson were living in the wide expanse of the Kenyan bush in the mid-twentieth century, there was little interest in lion conservation. The big cat was considered widespread and abundant; their future seemed guaranteed. But times have changed. 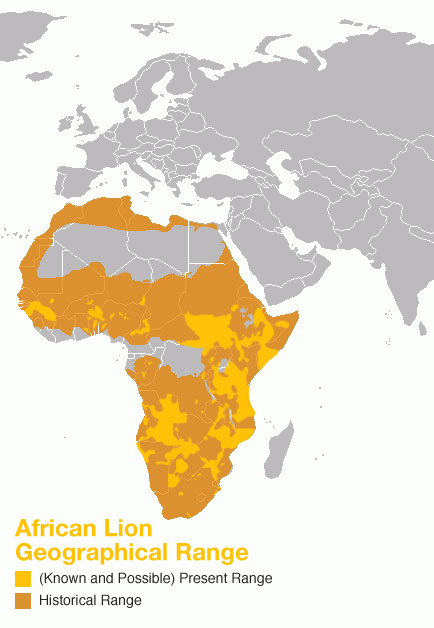 Historical population estimates of wild lions in Africa vary widely because the data is so sparse. Current studies tell us that there or only 6 or 7 viable populations of 1,000 or more lions left in the key wildlife reserves in Africa, with a possible total of only 20,000 to 25,000 in all living in the wild. While the figures aren’t exact, the trend is clear. An animal whose future was once assumed is now on the quick path to extinction. Kenya, the country where Elsa was born and raised, reports a loss of 100 lions annually. Dr. Laurence Frank, a conservation biologist at University of California Berkeley, has predicted that wild lions in Kenya could be extinct within two decades. In response to a sharp and continuing population decline, the International Union for Conservation of Nature (IUCN) has listed the species as vulnerable – a word previously unassociated with lions.

Perhaps the best indicator of what has happened to lions is to take a look at what has happened to their range. They once roamed the entire continent, with the exception of the center of the Saharan desert and the Congo basin’s dense rainforest. Today, lions have disappeared from 80% of that historical range. They now exist in only 28 countries in Africa, and are extinct in 26 others. Although much wildlife has experienced habitat loss over time, the lion has been hit particularly hard. In a 1983 report, R.H.N. Smithers wrote: “There is probably no other species whose distribution range has shrunk over historical times to the extent shown by the lion.” Today, lions cover only 10% of the continent, primarily in the southern and eastern regions.

What Has Caused This Decline?

The issues plaguing the lion are similar to the ones that threaten many other species. Human-animal conflict tops the list. As human populations grow, people and animals increasingly compete for resources. Urban expansion encroaches on previously cat-friendly habitats and this geographical crunch also depletes animal populations that lions rely on as food sources. And as humans take over more land, the lion’s territory becomes severely fragmented. What makes fragmentation so damaging to a species? Inbreeding tends to increase when prides are confined to small, disconnected pockets of land and with less genetic diversity, lions become more susceptible to disease.

Since 1960, Kenya’s human population has grown from 8 million to close to 40 million. No doubt, the Kenyan lions of today have less country to inhabit and fewer resources than Elsa had half a century ago.

People have also attacked lions in order to protect livestock that might otherwise become a lion’s lunch. And trophy hunting, a highly lucrative business, can be particularly harmful when unregulated. While other factors, like disease and ecological changes are responsible for population decline, until human-lion relations improve, the future of the big cat looks grim.