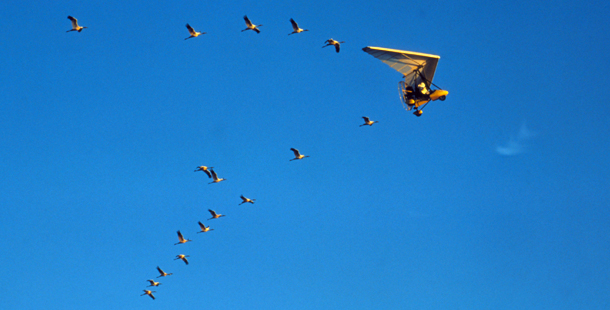 They are the superhighways of the sky. Biologists call them “flyways,” and each spring and fall billions of birds hit these atmospheric roads for their annual migrations, which can stretch thousands of miles. The sandhill and whooping cranes seen on NATURE’s Flight School, for instance, travel up to 2,500 miles each way on their migrations, following the same flyways first pioneered thousands of years ago by their ancestors.

In general, flyways follow major landforms, such as mountain ridges, coastlines, or river valleys that act as natural funnels. And while every type of bird may have their own route, many birds use the same general channels. In North America, for instance, scientists recognize four major flyways: the Atlantic, the Mississippi, the Central, and the Pacific. Birds typically move north and south along these routes between their breeding grounds in Canada and the northern United States, and their wintering grounds in South and Central America.

Overall, about 80 percent of the some 650 species of birds that nest in North America migrate along these flyways — and the few remaining whooping cranes are part of the seasonal traffic jam. Each spring, the small flock of wild whoopers that nests in Canada’s Northwest Territories embarks on its 2,500-mile flight south to the Aransas National Wildlife Refuge in Texas. The journey takes up to 3 weeks. Now, as seen in NATURE’s Flight School, conservationists are using ultralight aircraft to help establish a new migrating flock that will travel between Florida and the upper Midwest. There is also a non-migrating flock of whooping cranes in Florida.

While it might seem like the cranes fly a long way, their trip is nothing compared to the annual migration undertaken by the arctic tern. Each year, the small seabird takes a round trip that can top out at more than 20,000 miles, from the Arctic to the Antarctic and back again. Other sea birds routinely fly more than 10,000 miles on their migrations.

Each species handles their annual trips a bit differently. Some cut the journey up into short hops, flying low, and stopping frequently to rest or feed. Others, like many cranes, are able to use wind currents or “thermals” of hot air to soar vast distances. Some may fly as high as 30,000 feet to get the best breezes or to cross mountains. While some fly during the day, many others travel only by night.

In recent years, scientists have perfected the art of using radar and tags that transmit signals to satellites as they track birds on their remarkable journeys. This technology allows the researchers to see exactly where the birds are going, and how long it takes them. It also helps conservationists identify key resting and feeding grounds in need of protection.

The tracking studies even provide opportunities for the public to have a bit of fun by following specific birds through Web sites. Scientists studying satellite-tagged albatrosses in the Pacific, for instance, recently sponsored the “Big Bird Race,” which allowed gamblers to place bets on which bird would reach the destination first — with the profits going to albatross conservation. “Who knows, if enough money is raised with the “Big Bird Race” then maybe albatrosses may one day outnumber horses,” says Gemma Brass of Ladbrokes, the U.K.-based betting company that sponsored the race.

SHARE
Features
Additional Web and Print Resources
Interview: Joseph Duff, Operation Migration
The Man Who Walked with Geese
About
You May Also Like
Penguins: Spy in the Huddle | Episode 1 | The Journey
An Original DUCKumentary