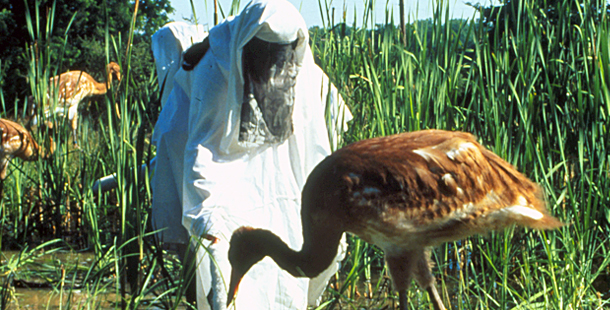 Rural children have who raised ducks or geese have long known about “imprinting” — or socially bonding to a parent figure. They learned that if they were the first moving object seen by newborn chicks, the young birds would soon follow them around devotedly. Many a delighted young farmer has paraded around the garden followed by “their” waddling brood.

But it wasn’t until the 1930s that a young Austrian scientist named Konrad Zacharias Lorenz formally documented the imprinting process — and gave it its name. Lorenz, who died in 1989 at the age of 86, ultimately won a Nobel Prize for his work.

Lorenz became interested in birds and bird behavior as a child. At one point, he recalled in an autobiography, “I yearned to become a wild goose and, on realizing that this was impossible, I desperately wanted to have one and, when this also proved impossible, I settled for having domestic ducks.” Soon, a neighbor gave him a one-day old duckling, which immediately began to follow Lorenz around, “to my intense joy.”

In college, Lorenz studied medicine and anatomy, but continued to keep and study birds and other animals. Then, in 1935, he published one of his most famous studies. In it, he showed that young ducks and geese could be “imprinted” on virtually anything — from people to colored balls — during their first days of life. Such “programming” probably evolved to help young birds recognize and stick close to their parents for safety.

Soon, university officials had set up a special institute where Lorenz and several other scientists could study animal behavior full time. But the work was interrupted by World War II. Lorenz became a military doctor, and was eventually captured by the Russian Army. After years as a prisoner, he returned to Austria in 1948, and was offered funds to resume his work. “We had money to support our animals, no salaries but plenty of enthusiasm and enough to eat,” he recalled. He eventually moved to Germany, where he was offered the chance to create a small research station.

For the next several decades, Lorenz helped pioneer the study of animal behavior, or “ethology.” He wrote several popular books, and soon became known to the public as “the man who walked with geese.” Magazines featured pictures of Lorenz leading, and even swimming with, his imprinted flocks. In 1973 Lorenz, together with two other scientists, was awarded the Nobel Prize for Physiology.

Today, Lorenz’s theory of imprinting is still being fine-tuned by scientists. Among other things, they’ve found that the imprinting window may not be as narrow as once thought. But, in general, Lorenz’s work has stood the test of time. And, as NATURE’s Flight School illustrates, an understanding of imprinting has important implications for conservation.

In the show, for instance, viewers meet Chewy, a gangly young sandhill crane whose parents were killed by a coyote. As a result, he was raised by people, and is imprinted on a woman named Mia. While Mia’s a great mom, Chewy never learned to behave as a normal, well-adjusted crane. As a result, he doesn’t know how to migrate and there’s little chance he’ll ever mate.

For biologists trying to raise and reintroduce endangered birds such as whooping cranes back into the wild, such imprinting gone awry would be a disaster. Conservationists thus go to great lengths to prevent newborn whoopers from imprinting on people. They wear crane costumes whenever they are around the birds, use puppets to feed the chicks, and raise the birds in isolated areas away from people.

So far, the strategy seems to work pretty well. And, eventually, researchers hope that there will be plenty of wild cranes to raise their own young — and biologists won’t have to worry about the behavioral quirk that Konrad Lorenz studied so long ago.