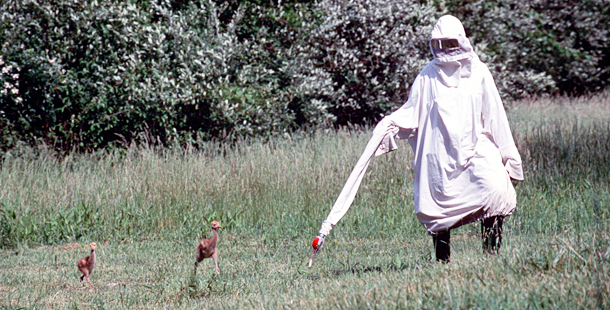 As a young boy, Canadian sculptor William Lishman wanted to be a military pilot. Vision problems grounded that dream, but he did eventually take up flying ultralight aircraft. And in 1988, he made ornithological and aviation history by leading a flock of 12 Canada geese that had imprinted on him; bonding to his plane as if it was a mother goose. Then, in 1994, he and partner Joseph Duff together led the first aircraft migration of 18 geese from Ontario to Virginia — a trip that later became the basis for the Hollywood film Fly Away Home.

Today, the two men help lead Operation Migration, a nonprofit organization that conducts migration studies and — as NATURE’s Flight School shows — is using ultralight aircraft to help restore migrating populations of whooping cranes to Florida. It’s a tricky business: In order to survive in the wild, cranes can not become imprinted on people, yet they must learn to follow an aircraft. piloted by a human.

NATURE caught up with Duff in Canada, as the group was tracking the Spring 2004 return of more than a dozen hand-reared whooping cranes it had led to Florida in late 2003.

It’s looking very good so far. We’ve got birds moving north, with some in Wisconsin, Indiana, and Illinois. It’s a lot of work keeping track of them all, but we’re happy (for an update, see the Operation Migration Web site.

How did you get involved in this?

Well, I’m a commercial photographer, and back in 1988 my friend Bill Lishman met a guy on a local lake here who was teaching geese to follow his boat, using the boat as a photography platform. Bill wondered if you could get the geese to follow an ultralight too. It took him a while to figure it out, but he finally did it. Later, we realized that this could be useful for endangered species. We’ve been pushing the idea ever since. We did our first crane study with sandhills in 1998.

How do you make sure that the cranes don’t imprint on you?

We work hard to minimize human contact and give the bird as natural an experience as possible. Only people in costumes get near the birds, which are raised in very isolated areas. So by the time they arrive in Florida they have never seen an uncostumed human. It’s a very strict protocol and very difficult to do — it complicates everything.

Many other kinds of cranes around the world besides whooping cranes are endangered. Is there any talk of using the aircraft approach with any of these other cranes?

There is a discussion using powered hang gliders with Siberian cranes (in Asia). That’s because all cranes are soaring birds — they don’t flap very often. Our birds have to learn to follow the eddies off the wing, and you can only do that when the air is calm. Once midday comes, it is far too bumpy for them. But with a hang glider, you can soar on the thermals, just like the birds do. But it would be very difficult. The Siberian crane’s migration route is very long, and hasn’t even been identified yet.

What’s the next landmark for the flock you are working to establish in Florida?

One thing is that we’re only in our third year so our birds haven’t started breeding yet. They start to pair bond at around three years old and may mate in their fifth year. So we’re waiting to see what is going to happen and hoping for the best.

What are some of the problems you face in keeping your flock safe?

Well, we’re always scrambling to raise funds. But beside that maybe the worst thing that can happen is that people start feeding the birds. Then they start ending up in the McDonald’s parking lot, or not migrating. So we always preach that people should just leave them alone. After all these are wild birds that were once known as the “white ghost of the wetlands.” They deserve to be left in peace.