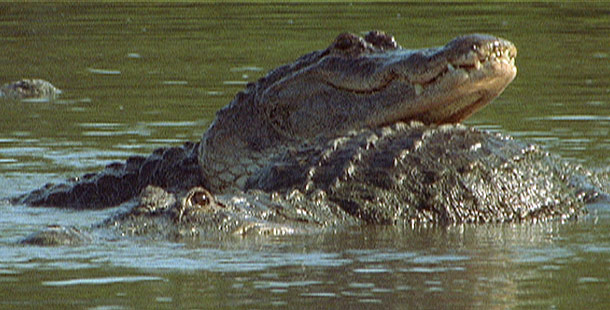 In the summer of 1521, the Spanish explorer Juan Ponce de Leon lay dying on a Florida beach, mortally wounded during a skirmish with a native tribe. Drawn by tales of crystal clear springs bubbling with glittering flecks of silver and gold, the aging adventurer had come seeking the legendary fountain of youth. Instead of finding immortality, however, the trip cost Ponce de Leon his life.

But the sparkling springs were no fantasy — as NATURE’s Springs Eternal: Florida’s Fountain of Youth shows. In an amazing underwater tour, Springs Eternal takes viewers down into Florida’s magical transparent pools, where toothy alligators lurk and lumbering manatees slumber. The filmmakers even follow researchers deep into the earth, diving into the dark and mysterious underground rivers that feed the springs.

Ponce de Leon named his landfall “La Florida,” meaning “land of flowers.” But Florida is just as famous for its springs, which spew out billions of gallons of fresh, cool water every day. The state boasts more than 350 gushers, one of the highest concentrations in the world. The reason for the watery bounty can be found underground, where porous limestone bedrock provides plenty of nooks and crannies for water storage. The bedrock, in fact, is riddled with flooded underground caverns.

Most of the wildlife action, however, is to be found in the remarkable pools and rivers formed by the springs. Shoals of fish drift in the lazy currents, including some oceanic species that swim up from the sea each winter to enjoy the warmer water temperatures. Rich carpets of rippling aquatic grasses carpet the sandy floor, attracting grazing manatees, the gentle marine mammals also known as sea cows. The springs are also known for a more ferocious inhabitant: the American alligator. Indeed, alligators are so common that Ponce de Leon’s fountains of youth might better be called fountains of tooth.

The large reptiles, which can grow up to 12 feet long, predate the dinosaurs. Having changed little in the last 65 million years, these living relics have managed to elude extinction. Only human exploitation has hampered their success. In Florida, for example, alligator populations plummeted due to spiraling demand for their leathery hides, which were made into everything from boots to wallets. Between 1930 and 1940, over one million alligators were killed in Florida alone. In the 1970s, however, stiffer regulations allowed populations to rebound. Today, they are quite common again, living proof of the power of foresighted conservation policies.

Springs Eternal gives viewers a front-row seat to alligator life, from the bellowing, splashy displays put on by males in search of a mate, to the gentle courtship that follows a first date. It also provides a fascinating glimpse into the enormous mounds of rotting vegetation that female alligators build to incubate their eggs. In early summer, the expectant mothers bury up to 90 golf-ball-sized eggs in their mounds, then stand by on a protective vigil.

About two months later, the eggs begin to hatch. The newborns call out in high-pitched peeps, alerting their mother to lumber over and scrape away the entombing material, allowing the babies to claw their way free. Moms may even help break open the eggs and tuck the young into their mouths for a trip to the nearby water. Typically, however, only half the eggs hatch, the rest having been eaten by predators, such as snakes and raccoons.

For the next six months, the hatchlings will stick together in groups called “pods” that are protected by the mother. The youngsters may stay in the vicinity of the nest for up to three years. But just two of every 10 newborns will make it to adulthood. The other eight will be snapped up by hungry neighbors, including sharp-beaked herons. Springs Eternal captures several of these long-legged wading birds on the hunt, stalking baby gators drifting unaware in the grass. The tough-skinned reptiles aren’t an easy meal. The herons must repeatedly shake and pound their prey against the water to break its bones, so that it will slide down their narrow throats.

Birds aren’t the only threat to baby gators. Hungry fish eat their share — as do other alligators. Even young alligators that have grown 4 feet long may fall victim to cannibals lurking in their neighborhoods. Still, enough gators survive their perilous early years to keep populations growing. And as more people flock to Florida, the two animals are bound to come into conflict. While alligators rarely attack people, they have been known to help themselves to pet dogs and livestock.

Sometimes, however, having a wild alligator on your property can be a benefit. Large gators, for instance, dig themselves sunning holes near lakes and rivers, providing a place for rainwater to collect. In dry years, farmers have discovered that these “alligator holes” are perfect natural watering holes for their livestock, saving them the work of building new ones.

SHARE
Features
About
Manatees: Monsters or Mermaids?
Diving in the Dark
Additional Web and Print Resources
You May Also Like
The Reptiles: Turtles and Tortoises
Fabulous Frogs