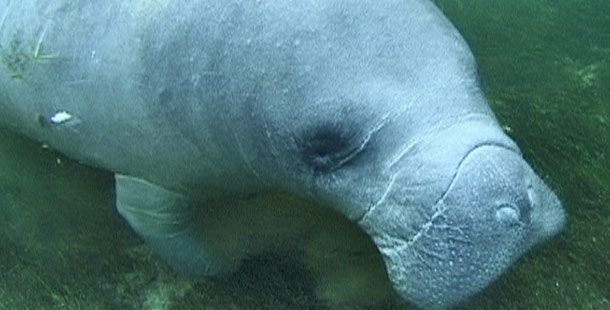 Early explorers hacking their way across Florida’s bushy landscape sometimes returned with amazing stories of mermaids basking in sparkling waters — or hideous monsters patrolling the seas. As NATURE’s Springs Eternal reveals, however, these tall tales were inspired by one of the most remarkable inhabitants of Florida’s springs: the manatee, or sea cow.

Manatees are marine mammals, like dolphins and whales. But they don’t share a dolphin’s sleek shape. Instead, they are slow, bloated animals that look like a pig or hippopotamus set to sea. And like livestock, they graze on vegetation, such as sea grasses.

Around the world, there are four kinds of manatees, which are also known as dugongs or sirenians (after the “sirens,” or mermaids, of ancient lore). A fifth species, the Stellar’s sea cow, used to live off the coast of Alaska, but hunters drove it to extinction in 1768, less than 20 years after it was first described by shipwrecked Russian explorers.

The Stellar’s sea cow was easy to kill because it lived in shallow waters, and was slow and fearless — just like its modern-day Florida cousin. Indeed, people can often paddle right up to a manatee, especially when the creatures gather by the hundreds each winter in a few Florida springs, such as the Crystal River, featured on Springs Eternal. The manatees are drawn in from their ocean territories by the springs’ warm waters and bountiful crops of vegetation.

Unfortunately, the manatees, which like to swim just below the water’s surface, are vulnerable to fast-moving boaters, who often run over the animals without realizing what has happened. And the gentle creatures are also threatened by water pollution, which is causing Florida’s once transparent spring waters to become increasingly cloudy. Much of the pollution is in the form of excess nutrients, such as nitrogen fertilizer from lawns and farms, which can trigger unwanted blooms of algae and tiny toxic organisms. These blooms sometimes form a deadly event known as a “red tide.” In the winter of 1995, for instance, nearly 400 Florida manatees (about 20 percent of the population) died from exposure to red tide.

Luckily, people are taking steps to protect manatees. Florida is attempting to educate boaters to slow down in areas inhabited by manatees. And the federal government has established several manatee refuges, where the animals can winter without worry of disturbance. The refuges have also proved a boon to researchers. They have learned, for instance, that though manatees may look ungainly, they can sprint short distances at speeds of up to 15 miles per hour, though they usually paddle along at about 4 miles per hour. Scientists have also shown that manatees have well-developed eyes: in clear water, they can detect objects more than 50 feet away. And they have been able to collect data that suggests that manatees can live 60 or more years.

It’s too early to know if such information will help prevent the Florida manatee from following its Alaskan cousin into oblivion. For the moment, however, visitors to Florida’s remarkable springs can still see the gentle animals that gave rise to myths of monsters and mermaids.

SHARE
Features
About
Fountain of Tooth
Diving in the Dark
Additional Web and Print Resources
You May Also Like
Braving Iraq
A Lemur's Tale
Siberian Tiger Quest
Forest of the Lynx
Wolverine: Chasing the Phantom
Black Mamba