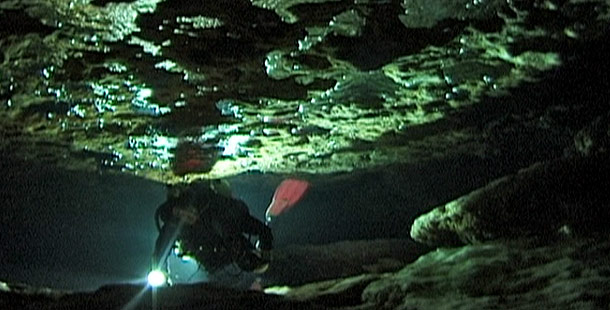 “It’s the most awesome thing I’ve ever seen.” That is how K. Michael Garman, a cave diver and researcher featured on NATURE’s Springs Eternal, describes the Dragon’s Lair, an unusual cavern he is studying in Crystal Beach Spring on Florida’s west coast. 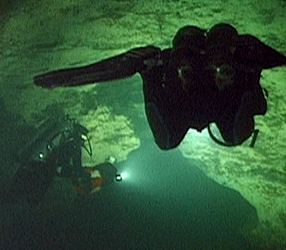 Exploring in the dark can be perilous.

As Springs Eternal shows, the Dragon’s Lair gets its name from a remarkable layer of bacteria that grows suspended in the water, lying like a smoky cloud between a heavier layer of salty water and a lighter layer of fresh water. “Some days it is thin and wispy, other days it’s thick and looks like solid bottom,” says Garman, who has probed the Lair’s depths dozens of times along with his wife Sherry and other divers. But the cloud never ceases to enthrall him, he says. “Every time I turn the corner [into the Lair], I’m afraid it will be gone,” he says.

Getting into the cavern network is no easy task, as Springs Eternal illustrates. Unlike most Florida springs, which exit on land, Crystal Beach Spring emerges from the seafloor of the Gulf of Mexico. To enter, divers must go offshore and swim down to the entrance, a narrow, rubble-filled hole barely big enough to squeeze through. But by shedding their equipment and dragging it through the opening, the divers are able to enter a mystical — and dark — world.

Garman, however, says the lack of light makes things more interesting. “I’ve never been bored in a cave,” he says. “When you are diving on a reef, you are often looking at just another fish. But in a cave you notice a lot more detail because you are focused narrowly on what your light is showing you.”

In Crystal Beach Spring, he’s found plenty to look at. There are blind crayfish, small crustaceans, and snails. And each room in the maze-like cavern has its own feel. Besides the Dragon’s Lair, for instance, there is Thunder Road, the cave’s main passage, and the Bacteria Room, which earned its name from the orange bacterial and fungal mats that line its nooks and crannies. Eventually, Garman, a graduate student at the University of South Florida, hopes to write a thesis on the cavern’s unusual food web, which is based on the bacteria’s ability to live on sulfur extracted from the sea water.

Such research is not for everyone. Cave diving is a dangerous activity that requires extensive training, Garman notes. New technologies — from brighter lights to more dependable breathing gear — have made the sport safer and easier, he says, but are no substitute for experience and good judgement. “We’ve had things go wrong, such as a light going out, where we’ve called a dive and exited the cave,” he says. “Sometimes, you just have to say: ‘The cave’s going to be here next week, and we can come back.’ It’s just the smart thing to do.”