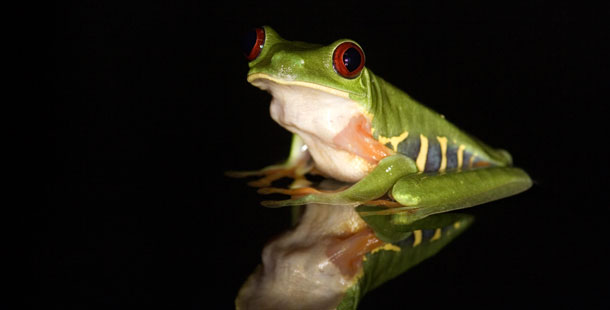 Dr. Karen Lips remembers when she came across the first infected frog at her pristine research valley in the cloud forest of El Cope in Panama.

For eight years, a team of scientists worked with Lips, a conservation biologist at the University of Maryland, to stake out conditions at the site, logging the number of frogs, tadpoles, and eggs for each frog species. They surveyed almost 30,000 amphibians. The team also kept track of where the frogs lived, when they bred, and the types of predators they faced.

“Everything was great until one day we found an infected frog. The next week we found the first dead frog. And within the next 4 months, we found 400 dead frogs,” says Lips. The frogs were infected with an amphibian skin fungus. “Seventy percent of the species that occurred there were found either dead or infected.”

By the next year, all the frogs in the streams had disappeared. Now, above the mountain streams of El Cope, the cloud forest is eerily silent – devoid of once-ubiquitous frog calls, but also of the rustling of snakes and the scrambling of lizards. The streambeds grow slick with algae that blooms unchecked without interference from snacking tadpoles stirring up sediment. The tadpoles also infused the crystal-clear streams with nitrogen – important for plant growth.

“The minute the tadpoles are gone, the water quality changes,” says Lips. “Whatever happens in those headwaters has an impact downstream.”

The fungus epidemic at El Cope documented how the disappearance of frogs triggers a chain reaction in an ecosystem. The storm front of the amphibian fungus is advancing 14 to 62 miles per year on every continent but Asia. It’s probably responsible for the extinction of at least 100 amphibian species since the 1970s. But the biggest menace to frogs remains habitat loss from development, pollution, and global climate change.

With nearly a third of the known 6,300 species under threat, scientists are racing to better understand the role of the frog in our world. Frog science may evoke the smell of formaldehyde and the image of scalpels glinting by pinned and splayed legs, but scientists have been turning to frogs — while they’re still alive — to better understand the health of our ecosystems and our bodies.

The evidence of algae growth spurred by tadpole declines describes only one fractured link in the ecological chain anchored by frogs. Wasps and spiders eat frog eggs; shrimp, fish, and dragonfly nymphs eat tadpoles; birds, snakes, and lizards eat frogs; and frogs in turn eat a wide variety of worms and insects.

“Amphibians play a huge role in these ecosystems in terms of feeding on insects and flies, many of which are disease vectors for lots of human diseases,” says Lips.

By eating pests like mosquitoes and their larvae, frogs may control the spread of diseases like avian malaria and dengue fever.

As a side effect of filling their bellies with bugs, some frogs concentrate chemicals called alkaloids in their skins. The frogs act as vacuum cleaners, sucking up insects or mites that contain the alkaloids. Studying the skins of poison frogs has yielded a catalog of over 800 alkaloids.

Researchers are just beginning to explore the chemical goldmine to be found in the skins of frogs, especially tropical and Australian frogs – the very frogs that are hardest hit by the amphibian chytrid fungus. Chemicals secreted and sequestered by frogs may turn out to be very useful to humans.

In the wild, the one-inch-long poison dart frog secretes enough of an alkaloid called batrachotoxin to kill 100 people. The poison locks open the sodium channel in nerve cells, potentially leading to cardiac arrest. Scientists examine the channel’s mechanism to study drugs like anesthetics and antidepressants.

The lessons locked in alkaloids may be able to be used to create non-addictive painkillers, appetite suppressants, and medicines to fight Alzheimer’s disease. Several pharmaceutical companies — Abbott Labs and Cephalon Chemicals among them — are exploring chemical equivalents to the frog alkaloids.

Researchers at Vanderbilt University Medical Center in Nashville, Tennessee, found magainins in the red-eyed Australian tree frog that may block infection by HIV – the virus that causes AIDS. The peptide punches holes in the virus’s cell membrane to destroy the virus – instead of attacking internal chemicals like most modern medicines.

And that’s just one peptide, from one frog. Another peptide — from the giant Mexican leaf frog — has shown promise as a potential treatment for high blood pressure. Yet another peptide from the same frog prevents blood clotting and could help scientists cure deep vein thrombosis and heart disease.

Frog toxins may hold keys to unlocking mysteries about our own bodies. But as frog populations face unexplained and unprecedented declines, what we can learn from frogs depends on how long they will be around.

“There are a lot of exciting things going on,” says Lips about the explosion of frog research. But she worries about the future for frogs. “At this point, we’re just keeping our fingers crossed and hoping for something to come through, because it’s not looking good.”

Infographic: All About Frogs
What You Can Do to Help the Frogs
Interactive Map: Frogs Around the World
Full Episode | Frogs: The Thin Green Line
Update From Allison (May 2009)
Last Stop: Australia
Ask the Filmmaker
Next Stop: Yosemite
First Stop: Panama
Notes from the Director
Additional Web Resources