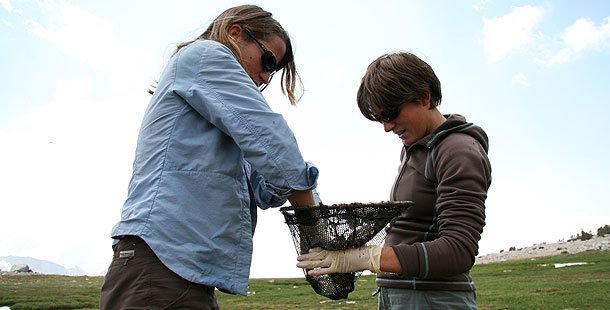 Scientists are struggling to understand why frogs are dying all over the world.  And not just frogs – but also other amphibians, like toads, salamanders, newts, and caecilians.  Herpetologists are scientists who study amphibians and reptiles.  The better they understand what’s going on, the more likely they’ll be able to suggest how to help the frogs.

But everyone can be a part of the solution.  Here are some ways you can help:

Learn more about frogs at your local aquarium or zoo.  Natural history museums are also a good place to explore.  In New York City, for example, the American Museum of Natural History has an upcoming exhibit (opening May 2009) all about frogs.

The internet makes it easy to find frog news, ranging from action-oriented to more technical.  Many people have started their own frog-related websites.  Some scientists have frog blogs, like this one by Dr. Roland Knapp, a research biologist at the University of California’s Sierra Nevada Aquatic Research Laboratory.

Knapp studies the mountain yellow-legged frog.  When scientists showed that trout introduced into Sierra Nevada mountain lakes decimated the native frogs, the National Park Service, the U.S. Forest Service, and the California Department of Fish and Game joined together to remove non-native trout.

Just as the frog was recovering from trout overstocking, it was hit with the amphibian chytrid fungus.   The Center for Biological Diversity petitioned to add the yellow-legged frog to the endangered species list to protect them by law, but it remains only a candidate for now.

One of the most important ways to help frogs also helps humans -– taking care of the environment.

Frogs are particularly susceptible to changes in the environment.  Their usually moist skin helps their weak lungs by exchanging oxygen and carbon dioxide with their environment – both in water and out of it.   In fact, last year scientists found a frog without lungs -– it breathes only through its skin.

Over 6,300 different species of amphibians are known – and new species are still being found.  Nearly half of the species are in decline, mostly from threats to their habitat.   Frogs lose their homes to development, but they are also harmed by garbage, non-native plants and animals, and discarded chemicals.

Watch what you throw away—and where you throw it away—to keep frog habitats trash-free.  The water that ends up in storm drains, for example, often travels through forests and grasslands and dumps into wetlands – all prime frog habitat.

On the other hand, shorelines should stay naturally cluttered with the leaf litter, rocks and logs that frogs use for cover.   Frogs evolved over millions of years to fit into specific ecological niches defined by factors like temperature and water levels.   They need clean water to survive,  but they also eat—and feed—other species.

Don’t introduce non-native plants and animals. The tadpoles that hatch from frog eggs depend on finding their favorite plants to eat and hide under.   As with the stocked trout and the mountain yellow-legged frog, sometimes even one out-of-place species can disrupt an entire habitat.

The invasive species can sometimes be another frog – like African clawed frogs and American bullfrogs that were moved outside their original habitats.  The worldwide export of some frogs may even have contributed to spreading the amphibian chytrid fungus around the world.   African clawed frogs were once exported for medical uses and are now popular as pets. Bullfrog legs are exported all over the world as food, especially from Indonesia.

If you’d like to keep a frog as a pet, look for a pet dealer who propagates his or her own animals and don’t release the frog into the wild without consulting an expert to see if it will be an invasive species.

Reduce chemical use. The water table on which we depend collects a lot of the chemicals we flush down our drains or add to our lawns (PDF), despite our best efforts to treat the water.

Chemical pesticides used in industrial agriculture harm frogs.   But declines in frog populations also show us that something is wrong with the water we drink.

Dr. Tyrone Hayes is a developmental endocrinologist at the University of California, Berkeley.  He studies how pesticides both affect amphibian development and also promote reproductive cancer in humans.

The pesticide atrazine, which is found in almost every American’s drinking water, causes hormone disruptions in both frogs and humans.

“[It] doesn’t matter if you’re a frog, a dog, a cat, a hog, or a farmer,” says Hayes.  “The hormones that are disrupted—testosterone, estrogen, thyroid hormones—those are all the same hormones.”

Don’t flush medicines down the toilet. Pesticides degrade water quality, but so do drugs flushed into our environment (PDF).  The treatment plants that process our wastewater don’t always remove pharmaceutical chemicals.  Most medicines should be thrown in the trash – sometimes mixed with kitty litter or gravel.

Conserve water. The less water you use, the less has to be treated.  And the more water stays with frogs in natural environments.

Give the frogs some time. If you want to be hands-on, find a local habitat preservation or citizen science monitoring program.  Or you can take part in a 24-hour BioBlitz near you.

Put your money where it counts. Many environmental organizations (such as Amphibian Ark and Partners in Amphibian and Reptile Conservation), zoos and aquariums, scientific consortiums, and countless community groups are already tackling the global frog crisis.  But there’s still a lot to do.  Donate or raise money for your favorite.

Infographic: All About Frogs
Interactive Map: Frogs Around the World
Frogs: The Thin Green Line - Preview
Update From Allison (May 2009)
Last Stop: Australia
Ask the Filmmaker
Next Stop: Yosemite
First Stop: Panama
Notes from the Director
A World Without Amphibians
Additional Web Resources