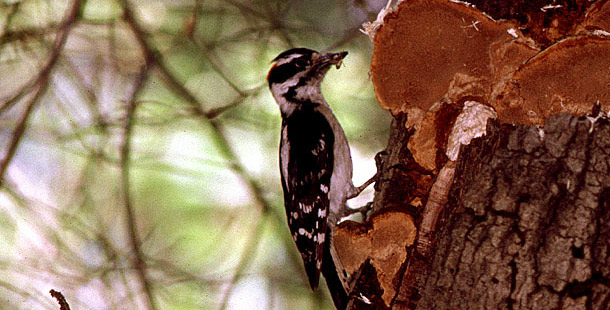 A bighorn sheep. It’s not difficult to encounter wildlife in the canyon. Mule deer, bighorn sheep, bobcats, mountain lions, and elk wander the same trails that visitors travel. Seeing animals close up in their natural habitats is breathtaking, but unfortunately, many people forget these creatures are wild. According to Elaine Leslie, a biologist at Grand Canyon National Park, run-ins with wildlife injure about 20 people each year — sometimes seriously. All it takes is a 400-pound deer striking out with a hoof or turning to take a stab with its antlers. However, the trouble begins many times when human visitors don’t respect the animals’ wildness. “I can’t tell you how many people we have who try to put their children on the backs of animals,” Leslie explains.

But as much as humans need to be careful about themselves, they need to keep the animals’ welfare in mind as well. Even though it’s forbidden to do so in any national park, people love to feed animals. And what creature can resist a tasty treat when it’s offered? The problems arise when the wildlife comes to depend on humans for meals. “The worst-case scenario for the animals is that they lose their ability to forage and strictly seek out handouts,” Leslie says. “We had a population of deer that developed a condition called cachexia, which is literally starving to death.” She explained that fawns acquired the behavior from their parents, never learned to feed themselves, and eventually died. Tragically, the park staff was unable to rescue this group of 30 deer.

An animal autopsy report showed something shocking: about five pounds of trash in one deer’s stomach. “Paper, candy wrappers, plastic bags. Anything associated with food,” Leslie explains. “Every single animal had trash in its stomach.” After a few months, Leslie found that deer began to migrate back into the same area, and the park launched a public awareness campaign to show what happens when visitors ignore the rules. “We have improved the health of the mule deer, and we are using that experience to make sure it doesn’t happen with our elk and bighorn sheep in the area,” Leslie says.

Another way humans are clashing with native wildlife is by seeing the Grand Canyon in a newly popular way: flying through the gully in a small airplane. Since the 1920s, tourists have marveled at the size of the canyon from a bird’s-eye view, but today more than 100,000 commercial flights per year echo engine sounds off the mile-high walls. While the 30 air tour operators provide a unique view for visitors, the noise pollution they create destroys the natural silence for those on the ground — including the wildlife.

In his 1996 Earth Day speech, President Clinton stated that “the intrusion of such aircraft can interfere with wildlife (including threatened and endangered species), cultural resources and ceremonies, and visitors’ enjoyment of the parks, including the ability to experience natural sounds without interruption from mechanical noise.” Ironically, his voice was temporarily drowned out by a plane as he spoke to the crowd. In 1987, Congress passed the National Parks Overflights Act to control the noise pollution situation. Years later, Congress continues to deliberate over the strictness of this law, and whether or not to make some national parks flight-free.