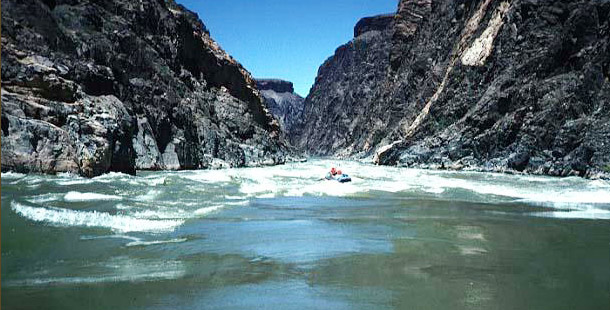 The Colorado is a major energy source. A journey into the Grand Canyon begins at the headwaters of the Colorado River in the Rocky Mountains. Streams of snowmelt flowing from the hills of northern Colorado collect in the great river basin, which flows another 1,400 miles or so to the Gulf of California.

Increasingly, this river has become center stage for the ongoing conflict between conservation and development efforts. The Colorado is the major water resource for most of the southwestern United States. The Hoover Dam in Nevada, built in 1936, and the Glen Canyon Dam on the border of Utah and Arizona, constructed in 1963, transform the energy from the Colorado into hydroelectric power for Wyoming, Nevada, Colorado, Utah, Arizona, New Mexico, and California. These states also receive an allotment of water diverted by the dams and measured in acre-feet. One acre-foot equals about 326,000 gallons — enough water to take a shower every day for 17 years.

The people in the states of the lower basin alone — Arizona, New Mexico, and California — consume an average of 7.5 million acre-feet per year. While the enormous dams mean drinking water, crop irrigation, and electricity for millions of people, this heavy draw on the Colorado has dramatically changed the role the river plays in a task begun millions of years ago: dredging the Grand Canyon.

After passing through the Glen Canyon Dam, the slowed-down Colorado enters the north end of the Grand Canyon fifteen miles downstream of the dam. Here, river rafters experience the mile-deep canyon from the bottom up. Closest to the water’s edge are layers of granite and schist (striated rock) that reveal the volcanic origins of the Colorado Plateau. Rafters heading down the gully follow the same route as the sediment and debris that are scraped off the canyon floor, giving the river its name, which is Spanish for “colored red.” But when traveling at the speed of the water, river runners’ main focus is not on the colorful name, but on avoiding collisions with boulders.

Can Animals Predict Disaster?
The Desert Lions
Iceland: Fire and Ice
The Secret World of Sharks and Rays
Soul of the Elephant
Meet the Coywolf