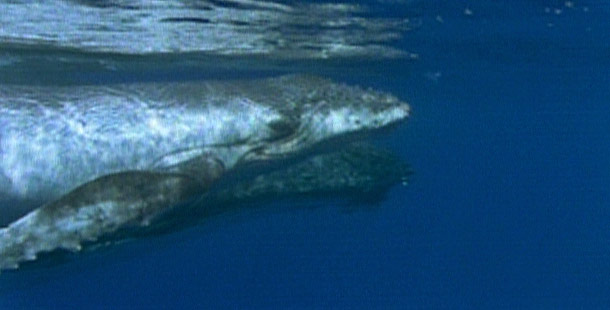 Just off a rocky coast, a broad whale’s tail arcs elegantly out of the ocean, hangs for an instant above the waves, then slides into the depths. The scene soon repeats itself, as the great creature again breaks the surface to take another breath, exhaling a misty spout through a blowhole atop its head, then quickly fills its lungs again.

A moment later, another whale in the group is “spyhopping,” lifting a third of its body out of the water like a periscope to get a better look around. Then it is “lobtailing,” repeatedly slapping its flukes, or tail, against the surface like blows from a giant floppy hammer. Eventually, yet another whale “breaches,” rocketing its entire 40-foot long, 30-ton body out the water, then crashing back down, filling the sea with foam and the air with thunder.

Such athletic, captivating performances have made the humpback whale a favorite sight for the thousands of people who go on whale-watching cruises each year. “It is one of the most interesting and gregarious great whales in the sea,” says Gary Lyder, a biologist who has guided whale cruises around the world. “They are very curious and will often come right up to your boat. I never get tired of watching them, and learn something new each time I see one.” 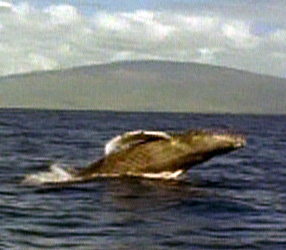 And, as NATURE’s Humpback Whales shows, the whale’s remarkable and often mysterious habits have also made it a favorite study subject for scientists. Their discoveries — from the realization that male whales sing complex songs while suspended in the depths, to the fact that feeding whales can use ingenious air bubble nets to herd fish — have helped bring about a new appreciation for this vulnerable animal, which whalers once killed by the thousands.

Today, however, the endangered humpback is protected by law and populations have rebounded to nearly 20,000 worldwide, about 20 percent of prior numbers. Humpback Whales gives viewers a front-row seat to the spectacle of this recovery, traveling from the frigid waters of Alaska and Antarctica to the tropical Pacific isles of Fiji and Tonga to reveal the whale’s complex underwater society — a world of both tenderness and aggression. Rare underwater footage documents both: the gentle bond between mother and calf, the fierce rivalry and sparring among males. Diving photographers also capture some of the humpback’s most remarkable habits, from its submerged concerts to the stunning feeding sessions in which a whale can trap hundreds of herring within a curtain of bubbles, then swallow the entire school in a single gulping lunge.

The humpback earned its common name from its swimming style, in which its arched, or humped, back lifts out of the water. But to many scientists, the humpback’s flukes are a far more interesting part of the whale’s body. That’s because each whale has uniquely shaped and colored tail fins that can be used to identify specific whales. “Fluke patterns are like fingerprints,” notes Lyder. “No two whales are alike.” 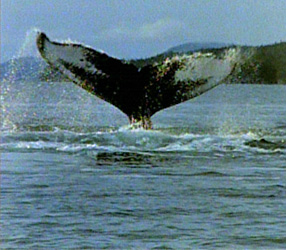 Each whale’s fluke patterns are unique.

Each whale’s fluke patterns are unique. Indeed, researchers have compiled thousands of photographs of the dark gray-and-white humpback flukes over the years, creating massive catalogs that allow scientists to name and number each whale, tracking their movements around the ocean. Sometimes, the whales are given light-hearted names, such as Lace or Dappled, that reflect their markings. Other times, the names reflect the realities of life at sea: Tidbit, for instance, had a chunk of tail flesh missing from a killer whale attack, while Lopsided probably lost one side of its tail to a ship’s propeller.

As Humpback Whales shows, researchers are also using newer technologies to study humpbacks. Using specially modified crossbows and rifles, they fire customized darts at the whales to collect tiny bits of flesh, which are then used to genetically fingerprint the animals. The genetic information allows researchers not only to identify specific animals, but also to work out family relationships. The genetic data has allowed researchers to conclude, for instance, that the world’s three major humpback populations — North Pacific, North Atlantic, and Southern Oceans — rarely interbreed.

Such information could be key to protecting humpbacks and ensuring their survival. But it may shed little light on the behaviors, from lobtailing to singing, that captivate many who come to know the whales. While many researchers agree that the whales are using both their bodies and voices to communicate, there is little consensus on exactly what each behavior means. Some say lobtailing, for instance, is a warning or threat, while others believe it is more of a welcoming gesture. “We know the whales are saying something,” says Lyder. “The question, however, is what it is.”

The Whale Detective
Equus "Story of the Horse" | Episode 2: Chasing the Wind
Dolphins: Spy in the Pod | Part 2
Living with Snow Leopards–Tashi’s Story: A NATURE Short Film
The Good, the Bad, and the Grizzly
Dogs in the Land of Lions