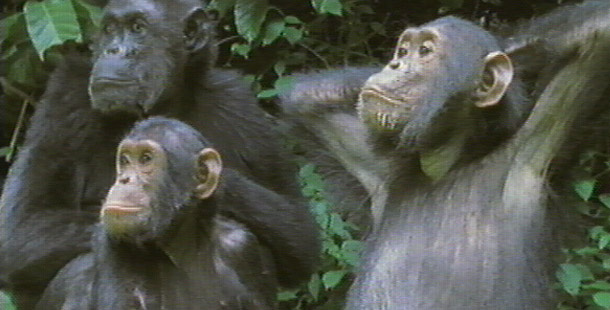 As you read this, you are probably aware of reading this. Indeed, you can also imagine yourself reading this — a sort of picture within a picture in your mind’s eye. But do animals share this kind of consciousness?

That is the question asked by Part Three of NATURE’s Inside the Animal Mind. The program ponders just what consciousness is — and which animals might share this trait with people.

Bees, for instance, appear to meet one of the requirements for consciousness. They can create “mental maps,” images they hold in their minds that allow them to navigate around their environments by picturing themselves there. Chimps and elephants appear to exhibit another consciousness trademark: an awareness of death. Both animals grieve when family members die: elephants even linger over the bones of long-dead relatives, seeming to ponder the past and their own future. But are these behaviors enough to give bees, chimps, and elephants membership in the consciousness club?

Researchers are actively debating the answer to that question. “Consciousness is one of the hardest things to define and study,” says Pete Chernika, an Austrian researcher who has studied consciousness in dolphins and other animals. “In experiments, for instance, dolphins appear to pass one consciousness test by recognizing themselves in mirrors. And dolphins also exhibit a keen awareness of the status and identity of other dolphins in their highly social groups, he says.They know who mom is, who the leaders of the pod are, and how they should behave around different individuals,” he says. “They appear to be able to envision themselves in relation to all these other animals and then act accordingly.”

Indeed, many researchers believe consciousness is more likely in highly social animals such as chimps and dolphins, who must be able to see themselves in relation to others in their groups in order to get along. “Complex social interaction puts a high priority on awareness of self and others,” says Chernika. But he warns that the more people study other animals, the more we realize how hard it is to define consciousness — and how hard it is to decide who has it, and who doesn’t.

Additional Web and Print Resources
Stressed Out
Who’s the Birdbrain?
About