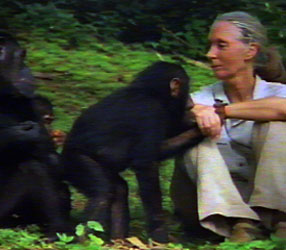 To a little girl growing up in war-battered England in the 1940s, the stories of Tarzan and Dr. Dolittle, who lived in the jungles of Africa with their wild companions, were enchanting and inspiring. That girl was Jane Goodall, and while she grew up determined to share a forest home with African animals, she may not have expected that doing so would lead her to fame as a naturalist, one who changed forever the way we see the chimpanzee, our closest primate relative.

Her revolutionary discoveries about chimpanzees are memorably documented in the NATURE program JANE GOODALL’S WILD CHIMPANZEES. The program gives viewers a rare look into the chimpanzee’s world by chronicling the tense struggle between two brothers, Freud and Frodo, for leadership of their troop. It also captures some of the chimp behaviors, from tender hugs to ruthless killing, that intrigue the scientists who investigate the origins of our own habits.

The idea that we have much in common with chimps, including more than 98 percent of our genetic code, is now widely accepted. But chimp life was still a mystery in 1957, when, on a trip she had saved for years to make, a 23-year old Goodall arrived in Kenya to visit a high school friend. Once there, in an effort to realize her dream of studying wild animals, she contacted Louis Leakey, a prominent anthropologist working at a Kenyan museum who would later become famous for his discoveries of early human remains at the Olduvai Gorge. She soon won a job assisting Leakey with his studies, doing everything from documenting monkey behavior to hunting for fossils. Leakey eventually encouraged Goodall to study chimpanzees, animals that he believed could provide us a window into our own beginnings.

Many scientists were skeptical, even scandalized, by Leakey’s suggestion that a young woman who had never gone to college could succeed as a lone field researcher in the chimpanzees’ rugged mountain home. Nevertheless, in 1960, Goodall began her research at Gombe Stream National Park in the East African nation of Tanzania. 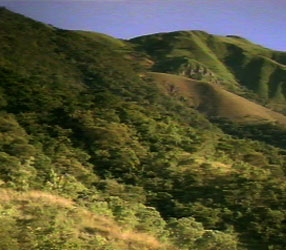 At first, as Goodall recalls in the NATURE program, it appeared that the primates’ behavior would remain forever mysterious. Within a few years, however, she became intimately familiar with their lives, spending her days trailing them through the forest and recording their habits. Some of her techniques were unorthodox and controversial: for instance, rather than assigning her chimps numbers, she gave them names like “Fifi” and “Passion.” She also set up at Gombe a banana-laden feeding station designed to lure the apes out into the open, where they could be more easily observed. She now regrets this practice, which somewhat altered the chimps’ behavior, but researchers have nevertheless found that Gombe’s chimps get less than two percent of their food at the station, spending the bulk of their time foraging in the forests.

Soon after becoming accepted by a local troop, Goodall realized that what she was observing challenged virtually every conventional notion about chimpanzees. Where many researchers saw “primitive” apes living a simple existence, Goodall found highly intelligent, emotional creatures living in complex social groups. Most dramatically, her work shattered two long-standing myths: the idea that only humans could make and use tools, and the belief that chimps were passive vegetarians.

Goodall’s discoveries were brought to the public’s attention by a 1965 NATIONAL GEOGRAPHIC television documentary, which vaulted her to international prominence and quieted her doubters. That same year, England’s Cambridge University awarded Goodall an honorary doctorate; she is one of only a handful of people to earn that distinction without having first completed four years of college. 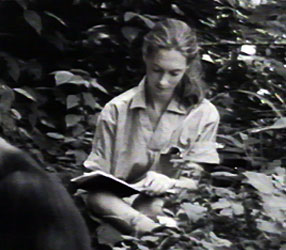 Goodall lived at Gombe almost full-time until 1975, accumulating a wealth of long-term data still valued by today’s researchers. Since then, she has founded Jane Goodall Institutes in nine countries, including Tanzania, the United Kingdom, and the United States. These days, she continues her studies from afar, focusing her attention on a passionate campaign for chimpanzee conservation and research and speaking against the nonessential use of chimps in medical research. She travels the world giving speeches (often punctuated by her haunting renditions of chimp calls) and raising funds for the half-dozen chimpanzee refuges she has established in Africa.

Compassion and concern for the species has swelled in recent years, partially due to Goodall’s proof of the similarities between chimps and humans. At the same time, however, there is a mounting interest in using them for medical research — an unfortunate one, in Goodall’s view. “Some scientists believe chimpanzees can be useful in finding out more about human diseases and searching for cures because they can be infected with otherwise uniquely human viruses,” she regrets. But, she cautions, “it isn’t only human beings who have personality, who are capable of rational thought [and] emotions like joy and sorrow.” Coming to grips with this, she hopes, will help resolve “many ethical problems [regarding how] we use and abuse animals.”