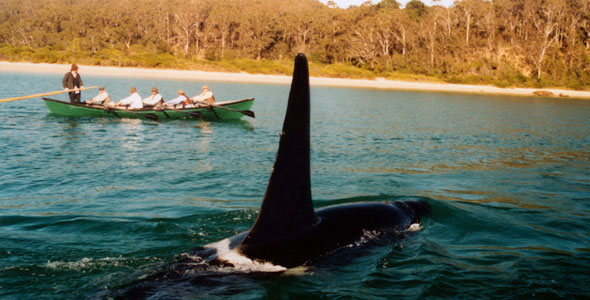 The rich, shallow waters of Australia’s Twofold Bay — featured in NATURE’s Killers in Eden — are a whale’s dream. The bay, which lies along the migration path of baleen whales such as humpbacks, has plenty of food and protection from heavy coastal currents.

But a century ago, Twofold Bay was also a whale’s nightmare — the site of cooperative hunting between killer whales, or orcas, and human whalers. Orcas would station themselves in strategic places, waiting to herd young or sick baleen whales. Human whalers would then set out in small open boats from shore, armed with sharp harpoons and strong ropes.

According to historians, the earliest record of a whale being killed in Twofold Bay dates to 1791. Just a few decades later, in the 1820s, came the first formal whaling stations. Then, in the 1830s, whalers erected the first buildings at the port of Eden. Later, that station became the property of Alexander Davidson and his family. Their stories of the remarkable cooperative hunting behavior of Eden’s killer whales — and particularly a pod led by a killer whale named Old Tom — have captivated visitors, historians, and biologists ever since.

As early as 1903, a reporter from The Sydney Mail was writing about the unusual partnership. “When a whale is passing north it is driven into Twofold Bay by whales known as the killers,” he noted. “When the killers succeed in driving the whale into the bay they leave off the attack and wait for the whale boats to come. Any attempt the whale makes to go out to sea the killers resent with all energy by snapping pieces out of it … all the time the killers are at work.”

The growth of whaling in Eden was part of a national trend. In fact, commercial whaling was one of the country’s earliest and most lucrative industries. By the mid-1800s, Australia’s fleet was second only to America’s, capturing thousands of southern right, humpback, and blue whales a year. The whales provided everything from oil for lamps to bone stiffeners for corsets.

By 1900, however, the industry was in decline, as some whale populations began to dwindle toward extinction. By 1930, whaling had ended in Eden — an end punctuated by the death of the killer whale named Old Tom. Following a brief resurgence after World War II, whaling in Australia ceased for good in 1978. Today, the Australian government opposes the killing of whales for profit.

More whales are now returning to Australia’s coast, some to Twofold Bay, where whale watching is now an attraction. It seems that with the end of whaling, the bay has again become a kind of Eden for migrating whales.