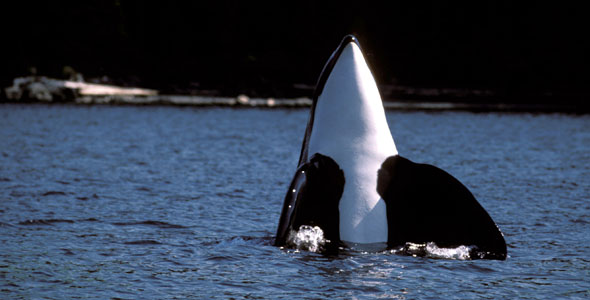 Spanish sailors called them the “whale killers.” The Haida of British Columbia knew them as the “killing demons.” To the Japanese, they were “fish tigers.”

Whatever the name, seafarers have long been awed by the hunting prowess of the large black-and-white dolphins known as orcas, or killer whales. Among their admirers are the whalers who sailed Australia’s Twofold Bay from nearly a century ago up to the 1970s. As NATURE’s Killers in Eden shows, these human whale hunters say they formed a partnership with the orcas, which helped them herd and hunt whales.

Those stories are difficult to substantiate. But researchers say it is certainly true that orcas exhibit remarkably creative, complex, and often cooperative hunting strategies. The highly social animals, which typically travel in groups called “pods,” are known to feed on everything from fish and seabirds to seals and giant blue whales.

Orca pods living in particular waters tend to specialize in certain species. In the North Atlantic, for instance, some orcas follow schools of herring. Working together, they’ll surround a school and herd it into a tight ball — sometimes by releasing a curtain of bubbles. Then they’ll take turns slashing through the school, stunning or killing fish with a slap of their powerful tails. Finally, they eat the dazed or deceased fish one by one.

Other pods specialize in picking off seals or sea lions. Along the California coast, for instance, they’ve been seen tossing unfortunate seals high into the air, probably in an attempt to stun them. Along the coast of Argentina, mother orcas teach their young an equally impressive hunting tactic — the killer whales literally fling themselves up on beaches in pursuit of young seals, then flop back into the sea with their meal. Apparently the taste of seal is worth the risk of getting stranded. 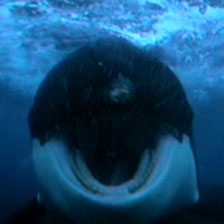 Orcas exhibit remarkably creative, complex, and often cooperative hunting strategies. Some orcas even use bait. They’ve learned that they can lure in a flock of seagulls by regurgitating fish and letting the scraps float to the surface. When the gulls land to eat the fish, they become the orcas’ feast instead.

In polar seas, orcas have discovered another trick. When penguins or seals take refuge on a piece of floating sea ice, killer whales rock the fragile raft, trying to knock off its occupants. Or, better yet, they use their bodies and tails to stir up waves that wash their prey off the ice and into the water, where another orca waits to snap them up.

Perhaps the most spectacular — but least understood — orca feeding behavior involves great whales. The orcas, which can reach 28 feet in length, sometimes take on whales many times their size. Usually, however, they go after young whales. First they’ll try to separate the youngster from its mother by chasing it for hours or days. Then they’ll surround the young whale and try to block it from reaching the surface to breathe.

Despite their fierce reputation, orcas have little taste for one seagoing animal: humans. Researchers say there are no documented cases of a wild orca intentionally hunting a human, although there have been attacks in sea parks. And there have been several cases where an orca may have mistaken a surfer or swimmer for some other animal.

The whalers of Eden, however, say orcas were not a threat. Instead, they acted as partners, steering their boats to whales out in the bay and, helping sailors who had fallen overboard back to safety. Far from killers, the whalers of Eden say their orcas were saviors.

The Elephants of Africa
Sharkland
The Last Orangutan Eden
Dolphins: Spy in the Pod | Part 2
Dogs in the Land of Lions
The Beauty of Ugly