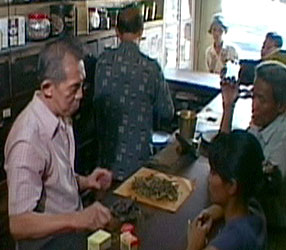 All five of the world’s diverse species of rhinoceros have been brought to the edge of extinction because of human appetite for their distinctive horns. The horns have been prized for tens of centuries for their beautiful translucent color when carved, and their supposed healing properties.

In the Middle Eastern country of Yemen, the horn continues to be coveted by Muslim men, although imports were banned in 1982. The material, whose luster increases with age, is used for the handles of curved daggers called “jambiya,” which are presented to Yemeni boys at age 12. Jambiya are considered a sign of manhood and devotion to the Muslim religion, and are used for personal defense. Yemeni men place great value on the dagger handles, which are commonly studded with jewels. In China, the ornamental use of rhino horn dates back to at least the 7th century AD. Over the centuries, rhino horns have been carved into ceremonial cups, as well as buttons, belt buckles, hair pins, and paperweights.

Far more pervasive, however, is their use in the traditional medicine systems of many Asian countries, from Malaysia and South Korea to India and China, to cure a variety of ailments. In Traditional Chinese Medicine, the horn, which is shaved or ground into a powder and dissolved in boiling water, is used to treat fever, rheumatism, gout, and other disorders. According to the 16th century Chinese pharmacist Li Shi Chen, the horn could also cure snakebites, hallucinations, typhoid, headaches, carbuncles, vomiting, food poisoning, and “devil possession.” (However, it is not, as commonly believed, prescribed as an aphrodisiac). 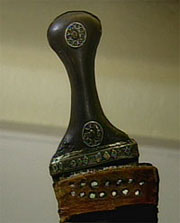 In Yemen, the rhino horn is used for the handles of curved daggers called jambiya

Historical mentions of other uses for the horns date back thousands of years. In Greek mythology, they were said to possess the ability to purify water. The ancient Persians of the 5th century BC thought that vessels carved from the horn could be used to detect poisoned liquids, causing bubbles in the presence of some poisons — a belief that persisted into the 18th and 19th centuries among the royal courts of Europe.

Now, science is now stepping in to dispel some of the mystery and fiction surrounding the use of rhino horn.

It is believed that there may be some truth behind the rhino horn’s ability to detect poisons which is linked to the composition of the horn. Rhino horns are composed largely of the protein keratin, also the chief component in hair, fingernails, and animal hooves. Many poisons are strongly alkaline (or basic), and may have reacted chemically with the keratin.

Unlike the horns of most animals, which have a bony core covered by a relatively thin layer of keratin, rhino horns are keratin all the way through — although the precise chemical composition of the keratin will vary depending on a rhino’s diet and geographic location. This fact has allowed ecologist Raj Amin of the Zoological Society of London and his colleagues to take “fingerprints” of horn samples and determine the animal populations they came from, which has helped law enforcement officials target and crack down on poaching.

Rhino horns are not, as once believed, made simply from a clump of compressed or modified hair. Recent studies by researchers at Ohio University using computerized tomography (CT) scans, have shown that the horns are, in fact, similar in structure to horses’ hooves, turtle beaks, and cockatoo bills. The studies also revealed that the centers of the horns have dense mineral deposits of calcium and melanin — a finding that may explain the curve and sharp tip of the horns. The calcium would strengthen the horn while the melanin would protect the core from being degraded by ultraviolet radiation from the sun. As the softer outer portion was worn away over time by the sun and typical rhino activities (bashing horns with other animals, or rubbing it on the ground), the inner core would be sharpened into a point (much like a wooden pencil).

Overall there isn’t much evidence to support the plethora of claims about the healing properties of the horns. In 1990, researchers at Chinese University in Hong Kong found that large doses of rhino horn extract could slightly lower fever in rats (as could extracts from Saiga antelope and water buffalo horn), but the concentration of horn given by a traditional Chinese medicine specialist are many many times lower than used in those experiments. In short, says Amin, you’d do just as well chewing on your fingernails.

Interactive Timeline: Rhinos Past and Present
About
What’s happening with Emi and Suci?
Additional Web and Print Resources