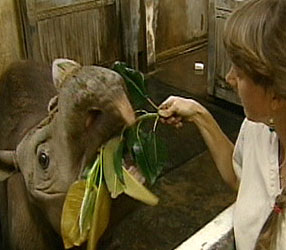 Viewers of NATURE’s Rhinoceros may be wondering how Emi the Sumatran rhino is faring during her third historic pregnancy. Emi, who gave birth to the first Sumatran rhino ever to be born in captivity in September 2001 (a 72.6-pound male calf named Andalas), and the second, the female Suci, as of July 2004, is now just a few months shy of delivery.

Based on early ultrasound examinations, scientists from the Cincinnati Zoo & Botanical Garden, Emi’s home for the past 12 years, predict that the calf will be a boy, and expect his arrival at the end of April. The pregnancy is going well, says Emi’s head keeper Paul Reinhart, much like her last two pregnancies (Emi’s first five pregnancies ended in miscarriage). The zoo staff monitors Emi daily, and makes sure that she also gets daily exercise.

Suci, who was just one year old during the filming of Rhinoceros, is now a strapping 1,380-pound, four-foot-tall toddler.

Suci, who was just one year old during the filming of Rhinoceros, is now a strapping 1,380-pound, four-foot-tall toddler. Although she’s just two years old, zoo scientists are keeping an eye on her reproductive status.

“Suci is being monitored so we can learn when Sumatran rhinos reach puberty,” says Dr. Terri Roth, the vice president of the zoo’s Center for Conservation and Research of Endangered Wildlife (CREW). “She is still immature at this time and probably will be for another year or two. We will want to breed her when she does mature” — which is predicted to be when she’s about six years old — “but finding a mate will be difficult.”

That’s because only ten Sumatran rhinos are in captivity worldwide, and the only males in North America are Suci’s older brother Andalas, now at the Los Angeles Zoo and Botanical Gardens, and her father, Ipah. Artificial insemination with the semen from an unrelated male Sumatran is an option, although the use of the technology is complicated by the Sumatran rhino’s unusual reproductive biology. CREW scientists have discovered that Sumatran females don’t ovulate until after they mate with males — which would seem to make long-distance, no-contact breeding impossible. However, other induced ovulators, like the koala bear, have been successfully bred and produced babies through artificial insemination.

Interactive Timeline: Rhinos Past and Present
About
Rhino Horn Use: Fact vs. Fiction
Additional Web and Print Resources

Dogs in the Land of Lions
Holy Cow
Deep Jungle: The Beast Within
The Good, the Bad, and the Grizzly
Sharkland
The Last Orangutan Eden