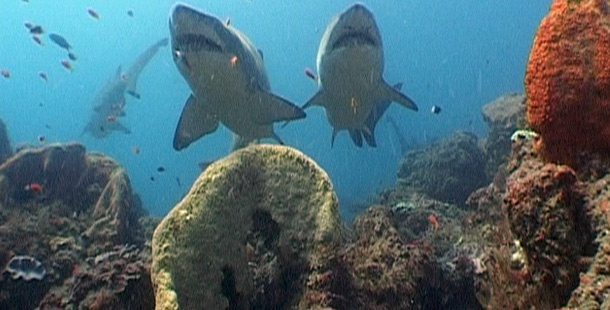 While still in their mother’s uterus, sand tiger shark embryos develop teeth–and an appetite. The largest of the babies in each of the sharks’ two uteruses attacks and eats its smaller siblings, leaving just two pups to be born.

It’s a particularly gruesome and extreme example of siblicide, the killing of one’s siblings, and the a rare form of cannibalism within the womb. And yet the practice of cannibalism itself, once thought to be an aberrant behavior, actually isn’t as rare in nature as we might like to believe.

Animals usually avoid cannibalism, but not because of any ethical or moral imperative; although consuming the flesh of one’s species mates offers a useful source of nutrients, it is also likely to contribute to the spread of pathogens, and, therefore disease. However, a number of studies over the past decade have revealed that cannibalism is surprisingly widespread across the animal kingdom. Groups that occasionally eat members of their own species range from lowly protozoa, slime molds, and sea slugs to insects, spiders, fish, reptiles (including dinosaurs; dinosaur bones have been found bearing the teeth marks of their kind), amphibians, birds, and at least 100 species of mammals, such as hamsters, rats, squirrels, bats, seals and sea lions, otters, polar and grizzly bears, lions, tigers, and chimpanzees. Researchers in New Zealand have even found the remains of a giant squid tentacle within the stomach of another giant squid-evidence that it either ate its compatriot, or accidentally ingested itself. Either option, scientists say, is cannibalism.

Like sib-eating sand tiger sharks, birds such as the bearded vulture and the northern goshawk have been observed eating their nest-mates. Other species, especially fish, eat their own young. For example, egg-eating is rampant among male fish guarding egg nests. Researchers have found that while the nests often contain eggs sired by other dads, the fish aren’t terribly discriminating in the eggs they munch, which means they’re often eating their own babies. It may be worthwhile to the fish, experts suggest, because the nutrients supplied by the eggs improves their odds of producing viable eggs and offspring in the future, which increases their lifetime reproductive fitness. Alternatively, the practice may perpetuate because it has a “neutral” effect, neither harming nor helping the lifetime reproductive success of the animal. Egg-eating may simply be a behavior that can occasionally come in handy.

Among small mammals like hamsters, mice, and rats, mothers often do the eating; after delivering a litter of pups, a new mom may realize that food and water are scarce, and will kill and eat her litter for self-preservation. Cannibalism can also occur to cull a an overly large litter, or when the animals are stressed. In many animal species including snakes, stillborn or deformed babies are often immediately consumed by their mother, which lets her get back at least some of the energy investment she put into her pregnancy (while also protecting any viable babies from being exposed to diseases from sick or decaying offspring).

Many other species generally try to avoid eating their own kin-but feed nonetheless on members of their own species. In some cases, it’s simply for food; male polar bears, for example, have been witnessed hunting and eating unrelated cubs when resources are scarce, and komodo dragons will feed on smaller conspecifics. Large crocodiles feed on smaller crocs to keep down the population size and preserve their food supply. This same behavior–large individuals eating small ones–occurs among many other animal species. Meanwhile, the males of other species, such as lions, grizzly bears, many rodents, and chimpanzees, will kill–and sometimes consume–infants to force their mothers into estrus, so they can sire the next litter.

Far more common is a practice known as sexual cannibalism, in which a female eats her mate during or immediately after having sex. The behavior has been observed among female green anacondas, who will mate with a number of males in a “breeding ball,” then eat one of her suitors, perhaps beefing up to survive a long pregnancy. Sexual cannibalism is rife among insects and arachnids, like black widows, praying mantises, and scorpions. In the redback spider, a relative of the black widow, males are actually willing participants in the feast; they flip onto the female’s mouthparts during copulation, encouraging her to dine. Because the spiders transfer their sperm to her in the process, their reproductive success is actually higher after this act of self-sacrifice.