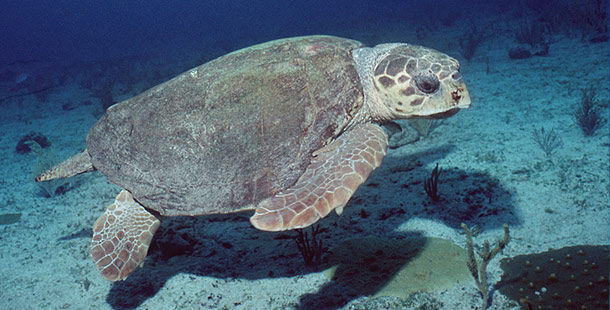 As master navigators of the sea, sea turtles like loggerheads have confounded scientists for years, setting off a research frenzy to uncover the secrets to their navigational expertise. Research on sea turtle navigation began with acclaimed zoologist Archie Carr in the 1950s. It was Carr’s 1956 book, The Windward Road, that first brought attention to the extraordinary homing skills of sea turtles. In the half century since then, the search has never abated. Through the years, scientists have collected a substantial pool of data on this “extra sense,” as Carr called it. They have tried to understand how two-inch long hatchlings can embark on a solo journey across open ocean, finding their way to a feeding beach thousands of miles away. And how adult turtles are able to navigate back thousands of miles with pinpoint accuracy to their natal beach. Researchers have hypothesized that it is a built-in global positioning system that guides turtles on these epic journeys. Though many questions remain, scientists have found that a sea turtle’s GPS unit is not one guided by satellites. Instead, it relies on one of the strongest forces on earth-the planet’s magnetic field.

The Earth’s magnetic field acts as a shield from charged particles that emanate from space, mainly from the sun. The field deflects the speeding particles toward Earth’s Poles. The magnetic field is like an enormous bar magnet that is strongest near the poles and weakest near the equator. The intensity results from the fact that the field lines emerge from the southern pole of the Earth, wrap around the planet, and re-enter in the northern half. The Earth’s magnetic field comes from a very deep ocean of liquid iron and nickel that sits above the planet’s inner core. This “outer core” is an electrically conducting fluid in constant motion. The motion of the conducting fluid generates electric currents and, as a result, a magnetic field.

Research on sea turtles suggest these animals possess a type of compass that enable them to detect both the direction and strength of the earth’s magnetic field, and this allows them to determine their location. As they move from place to place, animals like turtles essentially build a magnetic map in their minds. Just as a compass needle aligns with the north-south magnetic axis, the turtle’s compass relays directional information to it, providing it with a reference for its position. Researchers believe that turtles use such prompts in tandem with other environmental information such as underwater volcanoes or smells. Sensing magnetic signals is not a skill confined to sea turtles. Salamanders, sparrows, spiny lobsters, hamsters and bacteria all use magnetic field to get along in the world.

Recently scientists have shown how loggerheads detect magnetic fields and react to that information. In one recent study, baby loggerheads were observed while exposed to different magnetic fields that simulated three key locations along their migratory route. The direction in which each animal swam was recorded and analyzed. Animals exposed to a simulated northern field responded by swimming south while those in subjected to a simulated southern field swam toward the north. In each case, turtles swam in the general direction that would have taken them homeward, had they been swimming in the ocean and encountering the earth’s actual magnetic field. What’s even more fascinating, these turtles had been hatched in captivity and never had any experience of the open ocean. So it emerges that the loggerhead’s navigational abilities are probably innate and not learned.

Other studies on hatchling loggerheads have shown that even one-day-old newborns detect magnetic inclination angle as well as field intensity to navigate their way across the world. Some researchers suspect that turtles may geonavigate by detecting both magnetic features and then using a form of “bicoordinate” magnetic navigation. Such a multi-variable system might enable turtles to return to a home area from nearly any oceanic location. For example, if a turtle learns the inclination angle at a given feeding area along the coast, it might simply compare that information to the inclination angle that exists at its home area. If the inclination angle is too steep, the turtle knows that it is too far north and therefore needs to travel south to reach home. If the angle is too shallow, then the turtle knows it is too far south. They can also apply the technique to detecting isolines of magnetic field intensity. Researchers believe the geomagnetic abilities of turtles becomes more sophisticated and complex as they grow older.