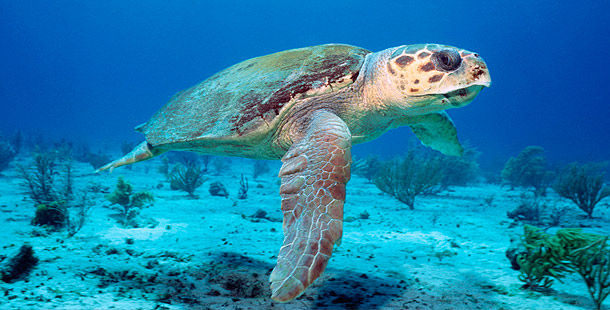 Voyage of the Lonely Turtle depicts a loggerhead sea turtle’s remarkable journey across an ocean back to its familial nesting site. Venturing across thousands of miles of open ocean to emerge on the very beach where it was born years earlier, the loggerhead performs one of the most remarkable feats of orientation and navigation in the animal kingdom.

“Turtles do return to the beach where they’re born,” says Wallace J. Nichols “Sometimes it will be hundreds of miles away. Sometimes thousands. For a loggerhead in California it was thousands.” That turtle, and the one the NATURE film is based on, was called Adelita. A captive loggerhead who trekked from her feeding site in Baja, Mexico to her place of birth in Japan, Adelita was the first animal ever tracked across an ocean basin. A decade ago, Adelita made her astounding journey of 9,000 miles, defying exhaustion and death, just to lay her eggs on one very special beach. Though Adelita’s trip shed new light on transoceanic migration, Nichols and other marine researchers have continued to fill in more of the unknowns in sea turtle migration.

HOW DO THEY DO IT?

“Turtles are master navigators,” says Wallace J. Nichols, “we can barely even imagine it.” With a lack of visible landmarks, strong currents, poor vision and the inability to raise their heads more than a few inches out of the water, navigating through thousands of miles of featureless ocean requires serious skills of another kind. But researchers believe these abilities are instinctual rather than strategic.

“It’s sort of like an extra sense,” says Nichols. Along with visual cues like sea mountains, which are potentially used as signals as turtles move away from the continent, or other sensory stimuli like smell, detecting magnetic fields is a key feature of a sea turtle’s navigational abilities.

WHY DO THEY DO IT?

Even with these astonishing skills that allow them to find their way across open ocean to a destination, the journey still offers considerable risk to sea turtles. Deadly predators, the raging sea, utter exhaustion-in the face of such threats, sea turtles head out for distant shores when it comes time to nest, even though they are surrounded by a coast of beaches in their feeding grounds. Researchers have been intrigued by this particular aspect of sea turtles for years. A creature that risks life and limb because only one beach will do appears to take fastidiousness to the extreme.

Ancient programming, in essence, explains this mystery. A particular nesting choice may reflect centuries-old conditions when temperature, beach profiles or the lack of predation made some areas preferable to sea turtles. “A turtle beach is a special kind of beach,” says Nichols: “the slope, humidity, temperature, types of predators.” In the world of sea turtle real estate, nesting beaches are prime property. They must offer open-water access, especially for larger sea turtles such as leatherbacks and loggerheads. They should have just the right slope so that a mother turtle can hoist herself to her nesting spot but not worry about flooding. The texture of the sand should be loose enough for gas diffusion, yet dense enough to prevent collapse during digging. Nearby offshore reefs and dune vegetation are both pluses. The location of a nest is critical to the survival and development of eggs and hatchlings. If a nest is too near the water, the eggs will become saturated with sea water and fail to develop. If it is too far up the beach, many threats arise: the roots from vegetation can invade the nest; the nest will be closer to predators; the hatchings will have a longer way to travel to reach the water.

In the end, turtle real estate decisions are not too difficult for humans to understand. The determination to make an exhausting, risky journey through the territories of predators and the daunting unknown comes down to historical experience. “If you were born on a beach,” says Nichols, “and it worked for your mom, it will work for you. Their strategy is to go back to the beach they were born. It’s been proven.” “To nest where they feed would represent a break with tradition,” says Nichols. As contemporaries of dinosaurs, the sea turtles have been employing their migratory strategy for a long time, and it looks like they’ll be sticking with it for the immediate future. “Pick a good beach and hatchlings survive. Clearly over millions of years, turtles have done just that,” says Nichols.

With all their ancient history and remarkable abilities, turtles today are faced with a relatively new danger, and one that may prove their undoing: the activities of humans are the greatest threat to the future success of sea turtles. In the year 2000, 1.4 billion hooks were cast into the world’s oceans through industrial fishing. These hooks snagged more than 200,000 loggerhead turtles and killed tens of thousands of them. Humans are also threatening sea turtle nesting beaches through actions that lead to beach erosion. We are disrupting nesting itself with our artificial lighting. Researchers believe that the damage we cause is likely have lasting effects on future nesting populations. With their life cycle dependent on specific nesting beaches and their need to roam the open ocean freely without the threat of becoming a by-catch, sea turtles must now depend on the consideration of humans to ensure that their epic journeys continue in future generations.