The powerful McNeil River Falls is a very popular nursery spot for growing grizzly bears. Every summer, hundreds of the huge animals gather at the falls to feast on migrating salmon and find mates. 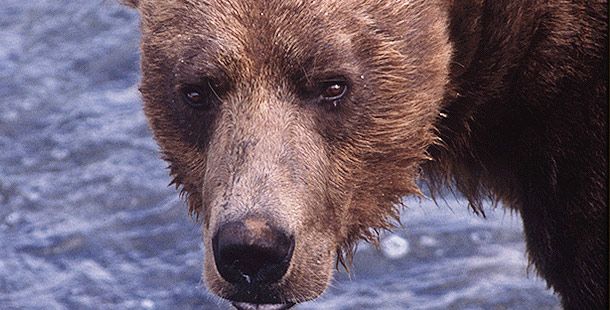 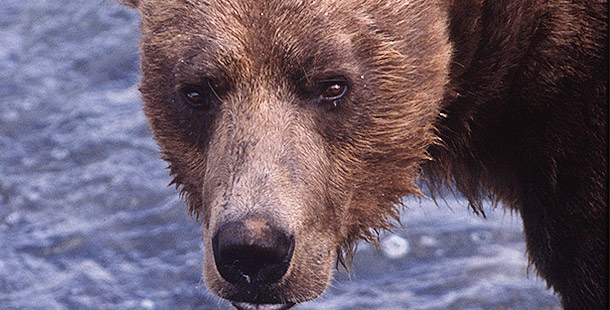 A roaring waterfall may not seem like a promising place to raise a child. The rocks are sharp and steep, and the frigid water speeds by faster than a freeway, threatening to sweep away toddling youngsters.

But in the Alaska wilderness, the powerful McNeil River Falls is a very popular nursery spot — for growing grizzly bears. Every summer, hundreds of the huge animals gather at the falls to feast on migrating salmon and find mates. And mother bears bring their youngsters to the frothy cataract for the most important summer school they’ll ever have: a crash course in survival that must last them the rest of their lives.

NATURE’s Showdown at Grizzly River tells the story of one bold little bear’s coming of age at the falls. It follows an 18-month old cub named Toughie as she spends her last few months with her mother, learning to pluck salmon from the fierce current, eat nutritious marsh grasses and, most importantly, how to behave around other bears. Besides tangling with cubs her own size, Toughie also learns how to deal with the towering adult males that threaten her young life, but may one day father her own cubs.

Showdown at Grizzly River also provides an unforgettable portrait of the older bears who, like regulars at a neighborhood diner, routinely gather at the falls. Their personalities are so unique that biologists who have studied the McNeil Falls bears for decades have given them nicknames. The cast includes Woofie, an expert thief who spends his summers stealing salmon caught by other bears, and his rival Creek Bear, a master of the intimidating behavior called the “cowboy walk.” Then there is Teddy, a mother bear who is desperately trying to provide food for her cub, while teaching her the survival skills she will soon need to survive on her own.

Luckily, there are usually enough fish to go around. Indeed, it is salmon that have made McNeil Falls one of the most famous grizzly bear gathering grounds in the world, where visitors can see up to 40 bears at a time fishing for their silvery meals. The migrating fish pile up beneath the falls — which are just 2 miles from where the river empties into the sea — creating a bottleneck that gives the bears easy pickings found at no other nearby stream. So many grizzlies line up along the rapids that some native Alaskans are said to have called the place “the river of bears.”

Today, however, the river is named after Charles McNeil, a gold prospector who lived in a nearby cabin in the early 1900s. Located in a roadless wilderness area 100 air miles west of Homer, beneath a towering active volcano, the river became a favorite destination for bear hunters, who were amazed by the number of potential trophies. But in 1955, Alaska officials closed the unique area to hunting to protect the bears, and in 1967 it was set aside as a special wildlife reserve.

But that wasn’t the end of the bears’ problems. By the early 1970s, hundreds of tourists and photographers were flying into the area to capture the remarkable sight on film. Soon, the visitors outnumbered the bears. It wasn’t long before some overzealous tourists got into confrontations with mother bears protecting their cubs, and males protecting their territory. Other campers stored food incorrectly, attracting bears, who then destroyed their tents. Disturbed by the crowds, the bears soon began leaving the area or fishing at night.

To solve the problems, in 1973, Alaska officials decided to limit visitation by issuing just a few hundred visitor’s permits a year. Today, just 250 people a year are allowed to visit the reserve, usually in groups of ten or less who are confined to small observing platforms. An annual lottery for the permits attracts thousands of entries, and interest is growing. “Some people have tried for ten or more years to get a permit,” says one Alaska official. “They never give up.”

Those lucky enough to win a permit are treated to a memorable adventure. After flying into a base camp, every morning the visitors don rubber boots to make a wet trek across marshes and streams to the viewing areas, which are just a few hundred feet from the bears. Then, for hours at a time, they have a front-row seat on the captivating and often dramatic stories that unfold before them. As one visitor once told a journalist, “every day at the falls is a soap opera,” whether it’s older bears fighting off challengers, or baby bears like Toughie getting the education of a lifetime.

Animal Attractions: Amazing Tales from the San Diego Zoo
Love in the Animal Kingdom
Song of the Earth with David Attenborough
The Venom Cure
The Dolphin Defender
Bears of the Last Frontier: City of Bears