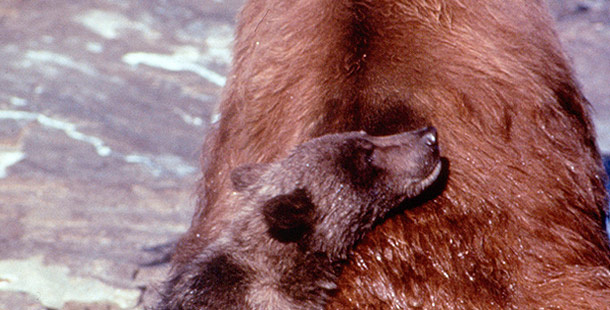 Like most grizzly bear cubs, Toughie — the little bear that is the star of NATURE’s Showdown at Grizzly River — must learn fast to survive. Most cubs spend just 2 years with their mothers before being left on their own, and nearly half of that time is spent in winter hibernation. So the pressure is on to pick up life skills quickly.

At the beginning, it’s hard to believe that bear cubs like Toughie could survive at all. Newborn bears arrive each January and February weighing less than a pound, nearly hairless and mostly helpless. But they put on weight fast, and by their first summer are able to follow their moms on hunting expeditions. But it is the second summer, when the cubs are big enough to begin hunting on their own, that is key to their future survival. In just a few months, they must perfect the hunting and social skills that will allow them to succeed as adults. The challenges are many. Older male bears will kill cubs if given the chance, so both mother and cub must always be on their guard. And disease and lack of food prevent many cubs from making it to adulthood. Indeed, when food is scarce, cubs may stay with their mothers for up to 5 years in order to increase the odds of survival.

But the bears that make it become animals to be reckoned with. Mature males in Alaska can weigh up to 1,500 pounds and stand over nine feet tall, while females are generally smaller. Bears that live in inland areas are also typically slimmer than those bears that live near the coast, because they do not have a ready supply of protein-rich food, such as salmon. Grizzlies have an especially good sense of smell. When the winds are right, they may be able to sniff out odors from more than a mile away. And their hearing and vision are as good as a person’s. Such keen senses have allowed some grizzlies to live for nearly 35 years in the wild. But researchers say most males live no more than 20 years, while females survive a bit longer.

Overall, however, many bear populations are in trouble. Once, more than 100,000 bears roamed North America. Today, however, bear numbers have dwindled to less than half that, due to hunting and habitat loss, with more than 70 percent living in Alaska.