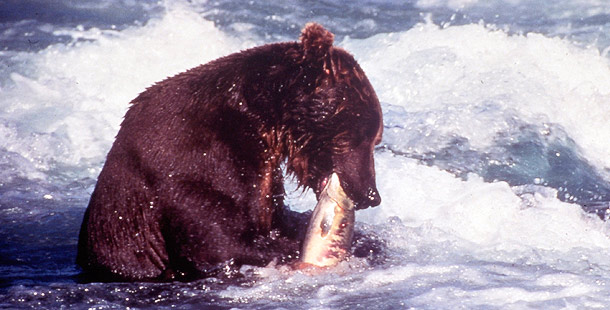 Without tasty salmon, there would be no bears at McNeil River Falls, the remarkable fishing ground documented in NATURE’s Showdown at Grizzly River. But while the bear gatherings are extraordinary, so is the story of how the fish find their way back to their home rivers each year.

Indeed, salmon migration — which brings adult fish back, after years at sea, to the streams where they were raised — is one of the wonders of the natural world.

The bears start gathering near McNeil Falls in June, in time to catch a small run of spawning sockeye salmon that arrives at nearby Mikfik Creek. But the major bear gathering doesn’t occur until July and August, when thousands of 5 to 20 pound chum salmon jam the McNeil River and jump the falls on their way upstream to egg-laying grounds.

Sockeye and chum are two of the five species of salmon found around the Pacific Ocean. All spend the beginning and end of their lives in freshwater, but spend most of their adult years feeding at sea. Even after voyages of thousands of miles, however, most salmon are able to find their way back to the same stream in which they were born.

How do they do it? It’s simple: they follow their nose. In the 1970s, researcher Arthur Hasler, of the University of Wisconsin at Madison, showed that shortly after hatching, young salmon “memorize” the unique chemical signature of their birth stream. Years later, they are able to follow that smell back home.

Chum salmon, for instance, home in on their thousands of spawning streams all around the North Pacific — from Japan and Siberia to Alaska and California. While some may travel just a few hundred yards upstream from the ocean to lay their eggs, others go on monumental journeys. Chum salmon in the Yukon River, for instance, travel up to 2,000 miles upriver to spawn. Each female may lay as many as 4,000 eggs. They then die, providing food for many animals and adding important nutrients to the river system.

The next spring, however, the cycle begins anew, as baby chum hatch from their eggs and begin their journey to the sea. And four years later, they’ll be back from their sea voyages, ready to literally give up their lives so that the next generation of salmon may live.

Additional Web and Print Resources
About
A Cub’s Life

The Good, the Bad, and the Grizzly
Deep Jungle: The Beast Within
Voyage of the Lonely Turtle
A Life Among the Clouds: A NATURE Short Film
My Congo
The Whale Detective