While following and filming a troop of snow monkeys, filmmaker Joe Pontecorvo was able to witness firsthand the distinct and charming personalities of these monkeys, as well as the ins and outs of a complex social system. Over the course of many months of filming, Pontecorvo recorded his observations of the snow monkey troop in a field journal, excerpted below. Get to know the troop like only a those living among them really can.

We follow the troop into the forest every day. In the evening we would follow them up the mountain, and in the early morning follow them back down again. Spring is birthing season. We found a number of individuals that had just given birth, dragging their placenta behind as they carried their newborn babies down the mountain. Mothers will often eat the placenta.

Spring arrives with its share of dangers. Japanese vipers are out sunning themselves on rocks during warm spring days and so rubber boots are recommended.

Japanese use vipers as a local remedy by soaking a deceased snake in sake. You can drink it or apply it to a wound. It stinks! 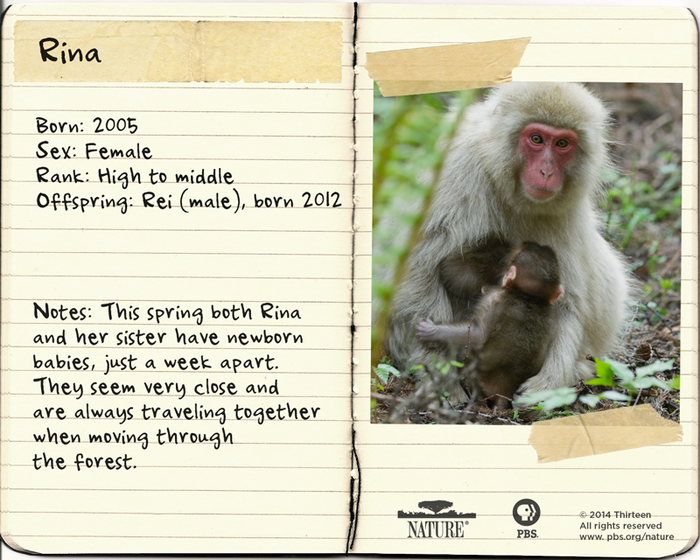 Only pictures can truly capture the unbelievable cuteness of a newborn baby monkey, and we became obsessed with documenting every moment of the newborns first steps. Unlike humans, infant monkeys take their first wobbly step just a few days after birth.

We are not the only ones who think babies are cute, older female off-spring seem obsessed with newborn babies. Just like humans, they just can’t wait to cuddle with their brand new baby sister or brother. They often try carrying them as if practicing to be a mom, and sometimes can get a little overly possessive. Today we saw one try and kidnap her baby sister, until mom finally caught up with her and took back the baby. It seems everyone wants to be a mom.

Number One (Kuro-San) and Number Two took the offense today and drove an outside male off a female. At one point they chased the intruder into the river. They pinned him down at the river’s edge. The monkey freed itself and made a dash up river, disappearing around the bend. I don’t think the intruder will risk entering the valley again. 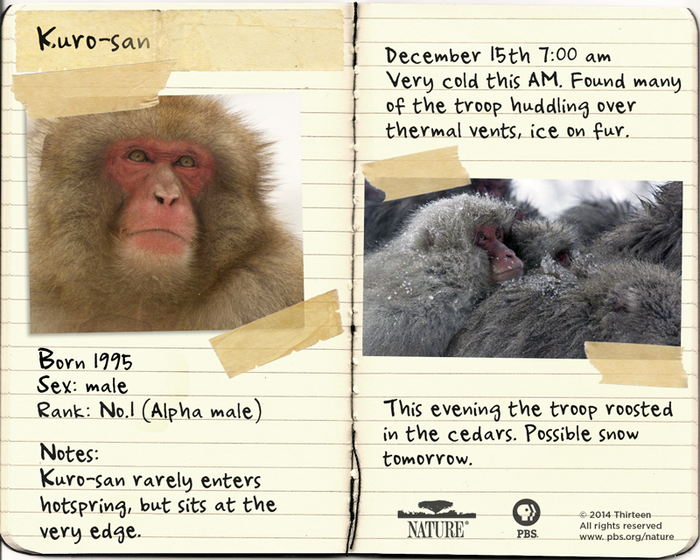 The monkey’s faces are much redder this time of year, especially the males. Many seem super aggressive. Shiro-san (Number Two) was in rare form today, chasing many monkeys out of the hot spring. During mating season the males get very territorial. It’s possible this is what we were witnessing, a strong territorial defense of the hot spring. It’s also possible they are simply pumped up on testosterone.

Mating season is a difficult time for the troop. Tension, like fear, is contagious. It spreads through the troop like a virus and often results in sudden outbursts of violence. It’s difficult to decipher these outbursts; is it payback for an argument earlier in the day or simply, “Get out of my face!”

This time of year males are pumped full of testosterone which naturally makes them more aggressive. Higher ranking individuals tend to have the longest courtships and spend considerable amounts of time keeping the female away from other males. But if the female runs or tries to slip away, the consequences can be brutal. Higher ranking males also have a tendency to violently interrupt the courtship of lower ranking individuals. Unfortunately it if often the females who are punished.

The females want to mate, but at the same time must protect themselves against aggressive males. The males on the other hand, especially higher ranking individuals, must demonstrated their dominance and superiority, and this often means taking an aggressive stance. 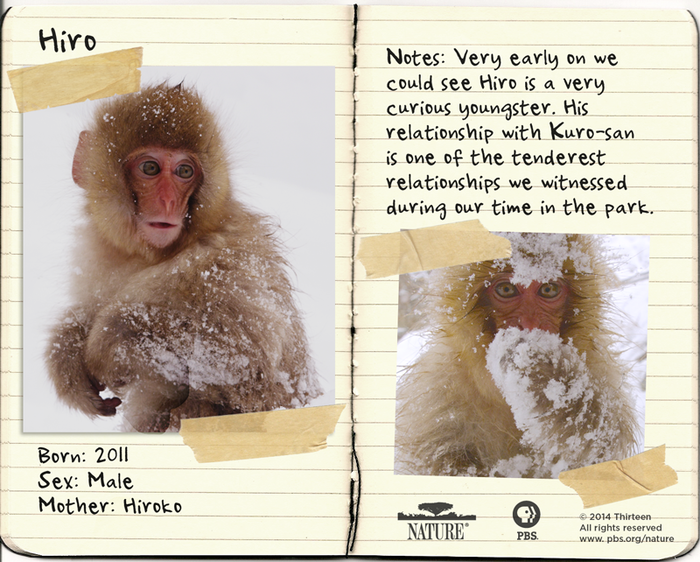 By now almost all the leaves have fallen and the bare branches hang like skeletons from the cliffside. A big male climbs into the tree and shakes it furiously, making sure all the other males know he is around and trying to impress the female with this feat of strength.

The temperature has dropped and a light snow begins to fall in the forest. This time of year the monkeys seem to be spending most of their time in the same spot and this morning was no exception. In the beginning they were foraging for the last of the fallen chestnuts and digging for mushrooms in the leaves. But now all that is left is bark and some fungi growing on the trees.

A heavy snow fall at night has blanketed the forest in new snow. Stubborn leaves still cling to some of the trees but Mother Nature has made it clear, winter is here. We found Bubbles and her baby shivering in the snow, it seems that winter has come early even for the monkeys. 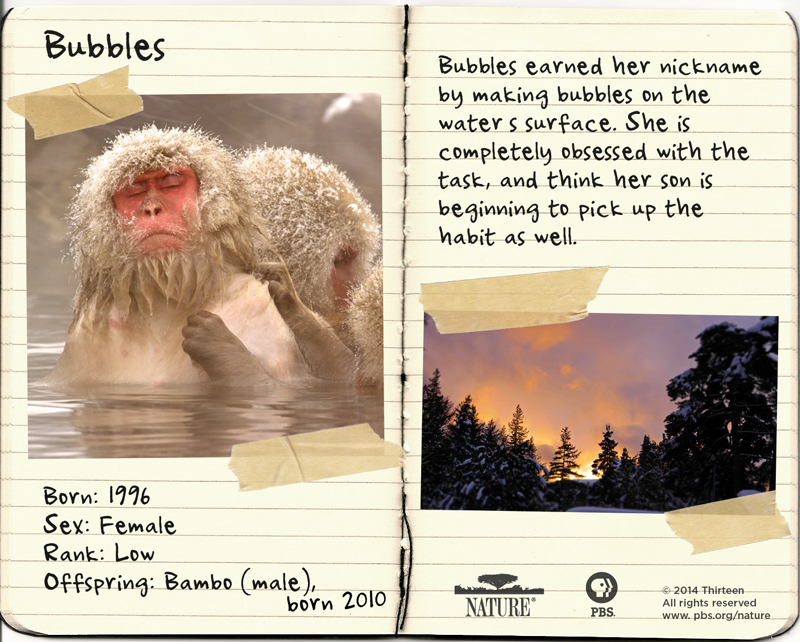 A snow storm hit this afternoon turning our location into a seamless white sheet. High winds blew snow everywhere making it nearly impossible to film. The troop took shelter in the forest to ride out the worst of the storm.

Early this morning we encountered Kura-san while he was coming down the mountain. At first he passed by me but a commotion caught his attention and he quickly turned around to investigate. The alpha male’s job is to stop such skirmishes. In this case Kura-san broke up the conflict and then stopped next to a baby. It was Hiro. He then gave the “hop on” signal, just as a mother does, and Hiro hopped on his back and he carried him down the steep slope into the park.