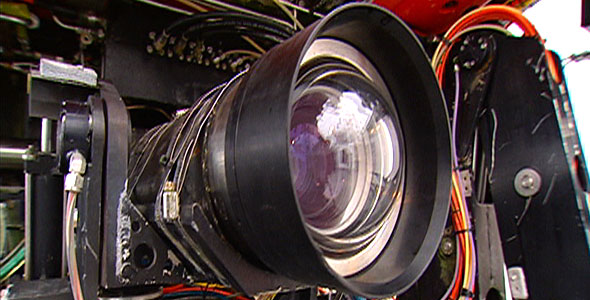 Dr. Edith (Edie) Widder decided she wanted to be a marine biologist when she was just 11 years old. But by the time she was in graduate school studying neurobiology, she had essentially given up the idea of fulfilling her childhood dream because of the lack of job opportunities for scientists in these fields.

Then, a chance encounter with a colony of jellyfish led Widder to her own career path investigating bioluminescence, the generation of light by living things, and building the instruments to study it and other undersea phenomena. One of the most remarkable pieces of equipment designed by Widder, who is now the president and senior scientist at Florida’s Ocean Research & Conservation Association, is the Eye-in-the-Sea, a unique, unobtrusive camera that sits on the sea bottom and records the never-before-seen behavior of marine animals.

How did you get involved in ocean research?

For my Ph.D. thesis I was measuring the electrical activity that triggers light emission from a bioluminescent dinoflagellate. As I was nearing the completion of my degree, my major professor wrote a grant for an instrument for measuring the color of very dim light flashes from bioluminescent animals. Because I have always been attracted to hi-tech instrumentation, I kept tinkering with this instrument, until I became the lab expert. At that point, he suggested I tag along on some marine biology trawling cruises and measure the colors emitted by different bioluminescent organisms. I was thrilled. Suddenly, I was doing what I had always dreamed of doing: going to sea on exploratory expeditions!

The animals brought up in the nets were fantastic, and their light-producing capabilities were incredible. I was enthralled, but I still didn’t see how I could carve a career out of this new passion. One of the research cruises I participated in was organized by Dr. Bruce Robison — currently at the Monterey Bay Aquarium Research Institute (MBARI) — to test a diving suit called WASP, which had been developed for use by the offshore oil industry as a tool for ocean exploration. [The suit is big enough inside that there is a display of dials, gauges, and switches in front of the wearer’s face.] I wanted to see for myself what bioluminescence in the depths of the ocean actually looked like, and Bruce gave me that opportunity. But first I had to qualify as a pilot, and one of the requirements was to be able to [screw a bolt into a large metal] shackle underwater using [only the manipulator claws of] the Michelin Man arms of the suit. The trouble was that my arms were too short, so I had to figure out a way to do it by manipulating the claws with my fingertips and switching back and forth between one arm and the other.

My dives in WASP were a life-changing experience. During my first open ocean dive, I went down to 800 feet and turned out the lights. I knew I would see bioluminescence, but I was totally unprepared for how much. It was incredible! There were explosions of light everywhere, like being in the middle of a silent fireworks display.

Were any of those dives especially noteworthy?

During one dive, I was using a light meter to measure the penetration of sunlight in the water. I was at a depth where the sunlight had almost disappeared and I had my head down looking at the red LED readout of the light meter display when suddenly the whole inside of the suit seemed to explode with blue light. It was so bright I could see all the dials and gauges inside the suit without a flashlight. I thought it was an electrical arc from something malfunctioning with the 440V that powered the suit. But it wasn’t electrical; it was biological. I had brushed against one end of a siphonophore chain, a colony of jellyfish more than 30 feet long. [Jellyfish in the subclass Siphonophorae connect into long chains, which can be over 100 feet long.] By bumping it I had stimulated its bioluminescence.

And that’s what got you hooked on ocean research?

Yes. I knew this is what I had to study, and it didn’t matter that there was no clear career path to do it. I had questions … Who’s making the light? How much light? How many organisms? Why? And, most importantly, why aren’t more scientists studying this? … and I wanted answers. I knew how much energy — the currency of life — that was required for an organism to produce light, so my subjective impression was that this has to be one of the most important processes in the ocean.

I’ve spent much of my career working with engineers to design and build the instruments I needed to answer my questions. Along the way I’ve been lucky enough to make some thrilling discoveries about who was making all that light and why, and also about what a useful tool bioluminescence is for figuring out how animals are distributed in the ocean and for monitoring the health of marine ecosystems.

When did you get the idea for Eye-in-the-Sea?

I have made hundreds of dives in submersibles, with each dive holding the promise of seeing an organism or a behavior that no one has ever seen before. But I have always wondered about the animals and behaviors that we’re not seeing because our bright lights and loud thrusters scare them away. So I decided to develop an unobtrusive camera system that used red light — which is invisible to the animals — and that was powered off a battery so that it could be left to sit quietly on the bottom of the ocean. I also wanted to test an idea for an unusual kind of lure that imitated a bioluminescent display I believed might be very attractive to large predators.

How long did it take to develop the system?

I first tried to get funding in 1994. The trouble is that it’s virtually impossible to get a grant unless you can tell the granting agency what you are going to discover. Since I had no idea, it wasn’t funded. I finally put it together with bits and pieces that we had around the lab, and a few small pots of money for different parts of the system. We had the prototype Eye-in-the-Sea developed as a student project for the Harvey Mudd College Engineering Clinic program in the fall of 2000. They produced a desktop version of the camera system. Then I got money from NOAA [the National Oceanographic and Atmospheric Administration] to build the camera housing and the frame, and I got MBARI, where I’m an adjunct, to buy the underwater battery. We used MBARI’s ship and remotely-operated vehicle for preliminary testing of the system in Monterey Canyon in 2002.

What has been the most exciting discovery made by the system?

I had wanted to place the Eye-in-the-Sea at an oasis on the bottom of the ocean, in some site rich with life that was likely to be patrolled by large predators. The first time I got to test the camera at such a place was in 2004, in the north end of the Gulf of Mexico, at an amazing location called the brine pool. This remarkable oasis is an underwater lake of water so salty and dense that it forms a pool on the bottom of the ocean. Methane, bubbling up through the pool, feeds a community of mussels and clams and other organisms that rim the shore. We placed the camera on the edge of the shore and left it there overnight. The first four hours of recordings showed fish swimming in front of the camera, apparently unperturbed by the red lights. Then, after four hours, the electronic jellyfish lure was programmed to come on for the first time. Just 86 seconds after it went into its pinwheel display mode, I recorded a squid over 6 feet long. It was not just any squid, but a squid so new to science that it cannot be placed in any known scientific family! I couldn’t have asked for a better proof of concept.

This August, we had an expedition to the Bahamas. We only had three deployments of the camera system during a nine-day cruise, but it was incredible how much we saw. We observed as many as nine different species of deep-sea shark, including a seven-gill shark, and the never-before-seen behavior of giant six-gill sharks rooting the sediment, presumably to scoop up pill bugs. We know so little about deep-sea sharks, especially about their normal behavior, that these recordings are scientific gold. As humans reach deeper into the ocean to feed a hungry planet, many of these deep dwellers are in danger of being wiped out. Their growth and reproduction are often too slow for them to be fished sustainably. We need to know about their life histories and behaviors in order to protect them.

Also on that cruise we recorded more bioluminescence than I’ve ever seen before with the Eye-in-the-Sea. Especially exciting was a series of displays that seemed to be triggered by the electronic jellyfish lure. It seemed like we were talking to something. We just don’t know what we were saying.

What does the future hold?

It’s going to be amazing when we have the Eye-in-the-Sea installed on the cabled network in Monterey Canyon. We’ll be collecting data 24 hours a day, 7 days a week. Instead of brief and infrequent glimpses, we are going to have a window into the deep sea that will be open around the clock, for months at a time. There is no telling what we may see.