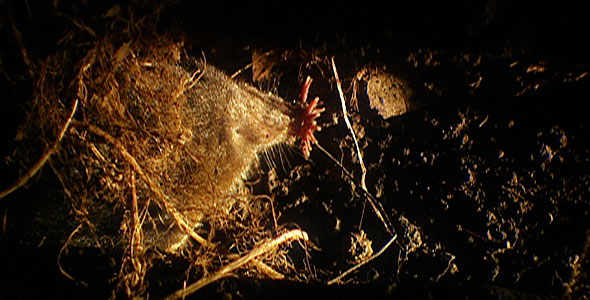 It won’t win any beauty contests, but in terms of talent, the weird-looking star-nosed mole is the one to beat. The little mole, scientifically known as Condylura cristata, commonly lives in the wetlands and marshes of the eastern United States. As its name implies, it has a star for a nose — specifically, a snout made up of 22 fleshy tentacles, that form a fleshy, circular star. And with that star, says biologist Kenneth Catania of Vanderbilt University, the little mole can do some remarkable things.

For example, Catania, who has been studying the unusual mole since his graduate student days at the University of California at San Diego, recently discovered that star-nosed moles have the odd habit of blowing bubbles underwater through their nostrils. It’s not mere play. Using a high-speed camera, Catania filmed the moles as they created the bubbles — at a rate of between 5 and 10 bubbles per second, or about the same speed at which other rodents sniff — and found that most of the bubbles are immediately sucked back into the nose. He also discovered that the moles aim their bubbles at specific targets; they’ll blow out a bubble to touch the surface of an object, such as a piece of an earthworm (a star-nosed mole delicacy) or a small fish. “When these bubbles come into contact with an object, it is almost inevitable that odorant molecules” — those that impart smell — “will mix with the air and be drawn into the nose when the bubble is inhaled,” Catania says. That means, he says, that the mole uses the bubbles to smell. The finding came as a big surprise to Catania and other scientists, because mammals weren’t thought to be able to smell underwater at all, much less smell by blowing bubbles.

In previous work, Catania found that the mole’s tentacled snout enables it to perform another prodigious feat: it can detect and gulp down prey with astonishing speeds. The moles, which are nearly blind, use their tentacles to survey their murky marshland habit. The fleshy tentacles, each of which is covered with over 25,000 sensory receptors (called Eimer’s organs), are used to repeatedly touch objects near the mole. Catania found that when a mole finds something that could be food, it needs just 250 milliseconds (a quarter of a second) to identify it, decide if it is edible, and eat it. Of that time, Catania found, only 8 milliseconds — 8 thousandths of a second — are actually used for the mole’s brain to make the identification. In fact, the mole makes these decisions so fast that it often messes up. It may pass by food that’s edible, then quickly head back to give it another feel. That inefficiency, Catania says, shows that the mole is “operating at, or near, the limit set by the speed which the mole’s nervous system can process touch information.” In other words, it’s literally impossible for the mole to forage any faster than it does.