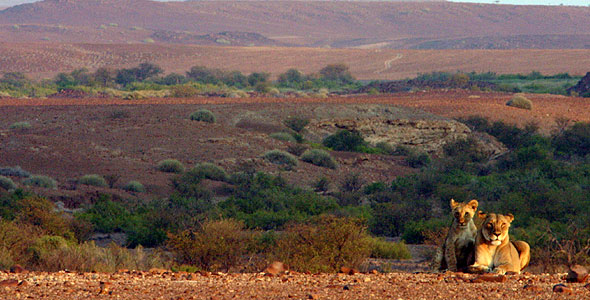 A decade of research on Namibia’s desert lions by carnivore expert Dr. Flip Stander has revealed a family structure and dynamic that is unique among Africa’s lions.

Namibia currently supports a population of up to 900 lions, with about 100 to 150 lions living in the northern Namib Desert near the Kunene River, the region that is the focus of Stander’s studies.

Like other lions, the Kunene lions live in groups, or “prides,” but the harsh desert cannot support large groups of lions. Wild prey is not abundant. As a result, Namibia’s desert lions break up into smaller groups, with between 2 and 10 members, versus about 15 in other parts of Africa. Desert lions also occupy much larger home ranges of 12,000 square miles or more, versus just 50 square miles for the lions living on the Serengeti Plains of Tanzania and Kenya. The animals have also learned to be less dependent upon numbers to hunt successfully; in the Serengeti, several members of the pride will usually be involved in a kill, while desert lions rely more upon stealth and the skills of fewer animals, such as the two lionesses whose cooperative hunting prowess is featured in The Desert Lions.

Lionesses in the desert have an average litter size of 2.8 cubs, somewhat bigger than in other parts of Africa, and, in general, produce a larger number of litters, indicating a more rapid rate of reproduction. The cub survival rate is a stunning 90 percent, far in excess of that seen among other African lion groups.

Among the lions of the Serengeti, young females rarely leave their “home” pride, that of their mother. But in the desert, Stander has found, it is common for females to break away from their mother to hunt independently — as young as 18 months old, 2 years earlier than would a Serengeti lioness. Perhaps even more remarkable is the fluidity of these arrangements. A female may reunite with its mother or sisters, often only to separate once again.

SHARE
Features
Additional Web Resources
Why Save the Desert Lions?
Secrets of Survival: Life in the Namib Desert
About
You May Also Like
Equus "Story of the Horse" | Episode 1: Origins
The Last Orangutan Eden
Dogs in the Land of Lions
Living with Snow Leopards–Tashi’s Story: A NATURE Short Film
The Good, the Bad, and the Grizzly
Equus "Story of the Horse" | Episode 2: Chasing the Wind