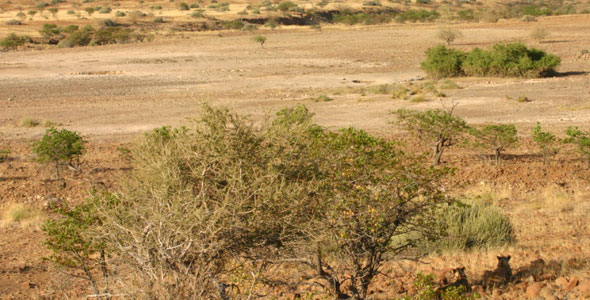 Africa’s Namib Desert is a harsh and unforgiving place, home to shifting, barren sand dunes, jagged mountains, and gravel plains. The vast desert — whose name means “place of no people” in the local Khoikhoi language — covers nearly 100,000 square miles and stretches along some 1,200 miles of the coast of western Namibia, in southern Africa. In the ancient 55-million-year-old desert, the world’s oldest, rainfall is scarce (less than 2 tenths of an inch per year in the west), and there is no surface water and just a few dry riverbeds.

And, yet, surprisingly, the Namib is a living place, home not just to the big cats featured in The Desert Lions, but to an impressive array of plants and animals. In the Namib live gemsboks (oryx) and springboks, ungulates that can avoid drinking water for weeks at a time by ceasing to sweat, plus a large number of small rodents and reptiles and a stunning diversity of beetles — which, like desert vegetation, have devised techniques to condense water out of the western desert’s distinctive, eerie, and life-giving morning fog. The fog is produced when the cool waters of the offshore Benguela Current interact with the warmer air over the desert. The Benguela also moderates the desert’s climate; temperatures in the searing, arid desert rarely rise over 104 degrees Fahrenheit (but can drop to near freezing at night).

Field studies by Dr. Flip Stander have shown that the lions of the Namib, which live mostly at the northern edge of the desert, can survive in extreme conditions, feeding on gemsbok, ostriches, and seals captured along the Skeleton Coast. They breed rapidly and quickly spread into new, suitable, habitats.

Like the lions and other desert inhabitants, the native Herero and Himba peoples have also adapted to the difficult conditions. Namibia’s 100,000-odd Herero once lived a nomadic life, but have now settled down to breed cattle and subsist on the milk and meat of their animals; many also depend on horticulture. Since European contact in the 19th century, the Herero have also adopted more modern attire.

Although the Herero have embraced a more modern existence, the Himba, who are descendents of a group of Herero herders who moved to northwestern Namibia, still hold on to their traditions. Himba men and women wear little clothing, aside from a loin cloth or a mini-skirt made of goat skin. Both men and women (who are noted for their elaborate hairstyles) rub their bodies with a mixture of ochre, butter fat, and an aromatic resin of herbs from the omuzumba shrub. The concoction gives their skin a distinctive reddish hue — and, more importantly, protects their skin from the harsh sun.

Himba have access to government-sponsored clinics and schools, but over the course of a year, the nomads move from one homestead to another, to find good grazing grounds for their animals. Because water is scarce, the Himba adapt their movements in concert with rainfall patterns. For example, when the rains come, they move to pasturelands created by the precipitation that falls on the desert’s margins. The Himba very often graze their animals near the Kunene River — home also to many desert lions — and take water from the river to drink.

The Himba’s tribal system also helps their survival in the desert. Unlike most nomadic populations, each Himba belongs to the clan of both their mother and their father. This is advantageous in a harsh environment, because it means that every individual can rely on the resources of two families spread over a wide area, rather than on just a single clan.

Additional Web Resources
Why Save the Desert Lions?
Lion Family Structure
About