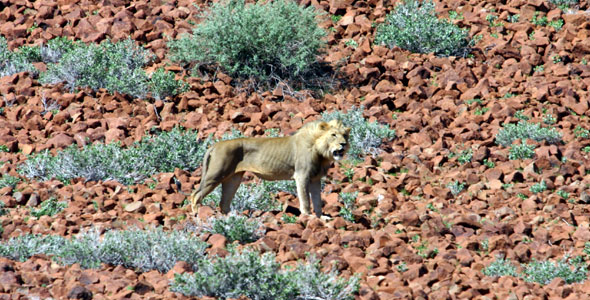 Like Africa’s other large carnivore species, populations of the lion, Panthera leo, have decreased significantly over the past half century, and precipitously over just the past ten years, from around 100,000 in the early 1990s to fewer than 30,000 today.

This decline is caused by a combination of habitat fragmentation, loss of prey, and deadly conflict with human settlers. It represents not just the potential loss of a single important and unique species, but could also have devastating effects throughout African ecosystems.

Ecologists once believed that ecosystems were largely influenced from the bottom up, with the numbers of prey species affecting the predators above them in the food chain. Over the past few decades, however, scientists have come to recognize that predators can also be the drivers of the system. A single predator can control factors such as the abundance, distribution, species diversity, and even the body shape of its prey — and, through a trickle-down effect — of all of the other species in the system. This effect was seen in Yellowstone National Park, when gray wolves, a “keystone” predator species, were eliminated from the park and the western United States in the early part of the 19th century. The lack of wolves caused population changes in prey species, like elk and beavers, and altered vegetation patterns, such as in the aspen trees and willows that grow along stream beds. With their recent return, the ecosystem quickly began to return to its former state. (See NATURE’s In the Valley of the Wolves.)

In a similar way, the loss of a top predator such as the lion can cause ecological changes. And without them, scientists lose any chance of understanding how all of the species in the ecosystem might normally interact.

Beyond its ecological significance, the lion is an important symbol in traditional African cultures, and is a key species in the growing eco-tourism industry, particularly in the northern Namib Desert, home to the animals featured in NATURE’s The Desert Lions. There is a delicate balance here — lions often prey on domestic livestock. Dr. Stander is working with local communities to prevent conflict between the lions and their human neighbors. If these communities can benefit financially from the lions, through eco-tourism activities such as “lion-photographic safaris,” they will have an economic incentive to tolerate the occasional loss of their livestock, and to help conserve the lions.