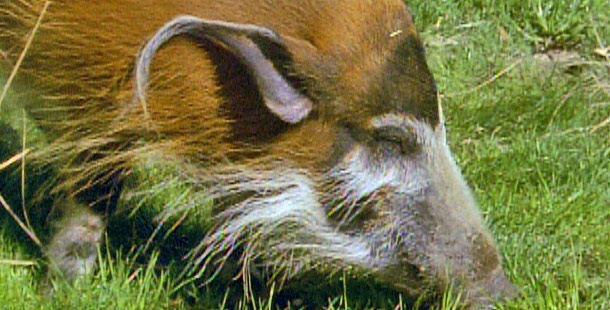 In the wild, there is only one skin-care product available to pigs: mud. A good coating helps protect any swine species from sunburn and bug bites. And since a pig has no sweat glands, mud also draws heat out through the skin, helping to regulate the pig’s body temperature on hot days. The need for mud is universal throughout the pig species of the world, but other characteristics remain unique.

Take the babirusa, an endangered pig species. Found on the Indonesian island of Sulawesi, the male has an unusual set of tusks, the result of his canine teeth curling upwards and piercing his snout. No one knows why babirusa developed these strange tusks, and they appear to serve no purpose — in fact, if the pig does not wear his tusks down or lose them in combat, they will eventually grow long enough to pierce his skull and kill him. Indonesians thought this animal’s bizarre tusks looked so much like a deer’s antlers that they named it “babirusa,” which means “pig-deer.”

Another facial adaptation for the pig is a beard. On the Indonesian island of Borneo, just north of Sulawesi, bearded pigs spend their days snout to the ground, sniffing out fruits that fall from the lush rainforest canopy. In the process, these pigs provide an essential gardening service for the forest. As they dig, their noses till the soil, creating furrows for fruit seeds that drop to the ground as they eat. Their work helps to regenerate tree growth in the rainforest.

One odd-looking pig species has tufts of hair dangling from its ears. The tassel-eared red river hog, or potamochere, lives in central Africa. Both males and females have these ear tassels, which scientists theorize the hogs may shake to threaten predators. Red river hogs take advantage of the forest clearings where elephants dig for water, running up to drink once the elephants have left.

The peccary is not a pig, but a relative that shares the pig’s sensitive snout. The rarest of the peccary species, the Chacoan peccary, is found in Bolivia’s Gran Chaco National Park. Here, giant thorn bushes tower over a dry ground. Only a handful of these peccaries exist in this rugged habitat. Their more successful cousins — the white-lipped peccary and the collared peccary — live in other tropical regions in Latin America.

Equus "Story of the Horse" | Episode 1: Origins
A Life Among the Clouds: A NATURE Short Film
The Good, the Bad, and the Grizzly
Dogs in the Land of Lions
Voyage of the Lonely Turtle
The Last Orangutan Eden